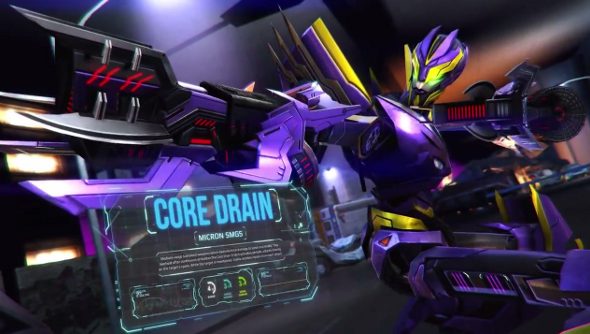 Jagex has revealed two more robots in disguise for Transformers Universe. One for the Autobots and one for the Decepticons; it’s all equal and fair. Though, and there are no surprises here, the Decepticons’ new recruit, Diabla looks infinitely superior to the Autobot, Sparkscape. A motorbike that looks like a lightcycle and tentacles that come out of her back – that beats another car with flame decals easily.

Take a look at their introductory trailers below.

I’m sure these Transformers are wonderful, but all we really want is Megatron and Starscream, right? Their will they, won’t they relationship will really tie the game together, I reckon.

Our Steve took a look at the MOBA a couple of months ago, and he wasn’t quite ready to buy into Jagex’s direction for the MMO-turned-MOBA. “The closed beta is where the depth of the game’s strategy can be properly explored, but while Jagex’s hands-off presentation showed a tactical game with plenty of flair, first impressions are of a browser game that’s limited in its ambition.”