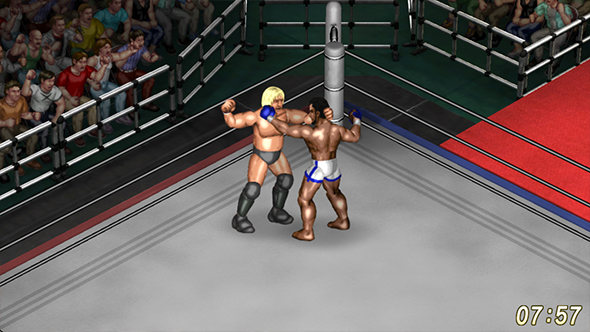 Fire Pro Wrestling World, which is often titled “way better than the WWE games” or simply “the good wrestling game” in the circles I frequent, left Early Access today and marked its 1.0 release. But Spike Chunsoft aren’t done yet with the Fire Pro revival, and they’ve announced a pretty significant bit of DLC to come in the future, as well as a bit of charitable content to help a wrestling legend.

Check out all the best PC games.

The 1.0 update for FPWW today adds a number of bug and UI fixes, along with anime-themed face parts and new moves including “full nelson” and “turning two-step knee kick.” Online play has also been updated to support four player matches. The game will enjoy a 33% discount from its Early Access price on Steam until January 4 – likely timed with Wrestle Kingdom, even though they don’t specifically spell that out – after which the cost will be permanently raised to $29.99 USD.

Spike Chunsoft also detailed their plans for future Fire Pro DLC, and their first expansion will be called ‘Fire Promoter,’ a manager mode that lets you take control of your own promotion and scout, train, and steal talent to book shows and build your reputation. This will be fully unveiled in January, along with plans for “further DLC and the season pass.”

Charity DLC supporting Yoshihiro Takayama is set to come out today, which will feature a premade version of the wrestler and the spirit punch rush move. Takayama had been wrestling since the 90s, and split his time between the ring and MMA’s octagon since the 2000s. Earlier this year, he suffered an injury during a wrestling match that left him paralyzed from the neck down. All proceeds from the $2.99 DLC go to TAKAYAMANIA, a charity set up to help support Takayama and his family following the injury. The content isn’t yet available on Steam, but is scheduled for release today.