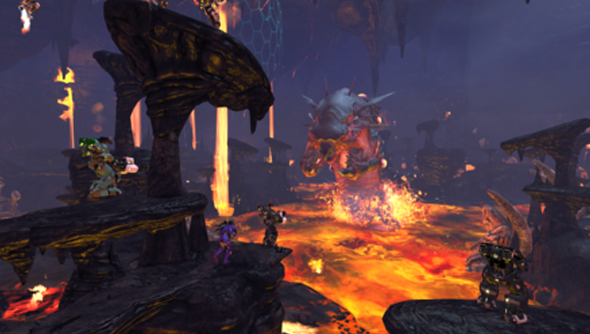 Red 5 have pushed out a new update for Firefall that brings elemental weapons, a titanic new boss, and a new dynamic event that’ll spawn in the world for you to dive into. The studio seem to be doing a great deal to liven up their world.

Just three weeks after launching the team released a substantial patch to make their world more chaotic and engaging. This latest update continues the trend.

The new elemental weapon effects mean that your sniper rifle won’t just score a ton of damage from a distance but possibly set your enemy ablaze, too. Besides fire your guns can have a Thermal, Flaming Thermal, Bioactive, Virulent Bioactive, Electrical, and Charged Electrical effect. It gives the game a distinct Borderlands vibe. Which is a welcome touch.

The new dynamic event, Crossfire, can see you stumbling across a minor war that you can choose to fight in or leave to work itself out. Accord soldiers are under attack from the invading aliens, Chosen, and you can step in to sway the battle in your favour.

You can see it all on show in the trailer:

Red 5 have also added Loot Pinatas, which act a lot like the loot goblins in Diablo III. If you spot one of the mechanical spiders you need to give chase immediately if you want their bounty, they move fast and extremely maneuverable so they will escape if given the chance.

Finally the new titan Red 5 are adding is a hardcore version of Kanaloa the Destroyer, the titan you fight in Devil’s Tusk volcano. “In the hardcore version of this Titan Battle, we’ve expanded on the mechanics of the normal fight and have made them harder, but not in the sense that only extra damage is dealt,” writes design director Scott Rudi. “Having actual gameplay changes for this mode keeps players thinking on their feet (or jumpjets) and helps mix things up for them. I suggest becoming a veteran of the normal version, and to be even more careful when in the hardcore version.”

I wasn’t that impressed with Firefall when I reviewed it back at launch but all my faults with the game were ones that could be fixed over time. Red 5 seem to be wasting no effort in making sure that happens sooner rather than later.

Here are the full patch notes of what’s coming in the update:

Increased the health of Assaults, Biotechs, Dreadnaughts and Engineers.

Five additional dynamic encounters can now be found in the open world:

The Hardcore version of Kanaloa the Destroyer has been unleashed with a few twists to the encounter. Gather your friends to take on a more challenging version of this titan for fun, bragging rights, and new epic gear.