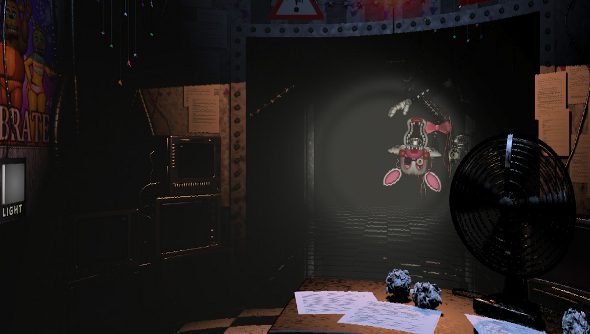 I’m on the night shift, writing news and drinking things that say “Warning: this amount of caffeine is fatal” on the label. The light in my study is out of commission, so I’m using a lamp that’s not very effective. Most of the light comes from my monitor as I browse press releases, forums and emails. The usual routine.

But something’s not quite right. Is that a noise coming from Steam? When did I even log into Steam? Wait… is that an animatronic bear? It’s moving towards me now. I think I need to stop breathing. Five Nights at Freddy’s 2 just appeared on Steam and it’s probably going to kill me.

It wasn’t that long ago that Five Nights at Freddy’s 2 was begging for votes on Steam Greenlight, so its arrival on Steam – you can buy it right now, or try the demo first – is a bit of a surprise. A horrific surprise with sentient devil machines and one solitary security guard who is almost definitely going to die over and over again.

Like it’s predecessor, Five Nights at Freddy’s 2 puts players in the shoes of a night security guard in a children’s restaurant, Freddy Fazbear’s Pizza, which becomes a nightmare realm at closing, one where animatronic beasties cease to care about entertaining kids, instead developing a taste for murder.

It’s a juggling act. From the security office, you can go through all the different security feeds, and the nasty creatures will remain stationary when they’re being filmed. It’s like those awful angels in Doctor Who, but with cameras. But you can’t look at all of them, so when your attention is elsewhere, the others will start to make their way towards your office.

The sequel adds new horrors, hungry for your blood or whatever it is machines feed on. Don’t worry, though! Management has your back, and has provided you with a handy Freddy Fazbear head to wear, which can trick the creatures into thinking you’re one of them.