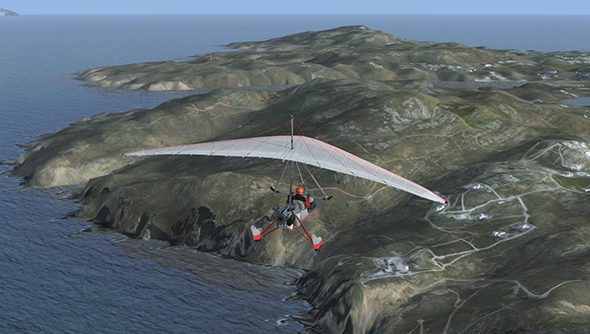 One question I’m often asked is whether the plethora of scenery packs available for Flight Sim X, X-Plane et al are really worth the time, money and installation effort.

In truth, I’ve never actually been asked that and only said so to provide a handy opening segue into this review. But hey, it worked and so here we go.

To Mykonos! Home of sun-kissed Greek playboys, Greek-kissed funboys, and some strange mini-windmills.

Mykonos is one of Aerosoft’s newer scenery packs (there’s also a recent one for Corfu but let’s not go too chav, darling) and we’re going to use it as an example of just how much better a quality add-on pack like this can make your basic sim experience. We’ll do this with a series of ‘before’ and ‘after’ screenshots showing the region with and without the Mykonos pack installed.

First up, let’s take a look at the overall topography of the place. The story goes that Mykonos was created from the petrified body of a giant tossed into the sea by Hercules. Which shows that people will live anywhere. Let’s see how ‘sunken giant’ it looks first of all in FSX’s default mode… A distorted desert hexagon with a touch of gangrene. Somewhat of a post-apocalyptic Mad Max feel to the place though, although it is roughly the right basic shape and is surrounded by water. Like all good islands tend to be. Now, after the Mykonos scenery pack is applied… Much better. To start with it doesn’t seem to be covered by desert. The various bays and coves have sprung into existence and we’ve even now got the extra islets on the east and west sides (presumably the stone giant’s knees or other appendages). Right, let’s get the flight started. To the runway. First the vanilla version… FSX doesn’t actually do too badly when it comes to runways. Understandable given how crucial they are to the experience of flying in a being-able-to-land-without-dying sort of way. But it’s the basic generic runway texture and there’s not much in the way of airport infrastructure to be had. With the pack applied things are much better. The runway has a much more true-to-life texture (check it on Google Maps), the surrounding landscape is more realistic and there’s even a fence around the airport to stop wandering Greek gods attacking the ‘metal wing-ed beasties’. Up in the sky and the Mad Max-style wasteland effect is more prominent in FSX’s basic mode. With the scenery pack active things are much more populated. Houses, hills, roads, traffic and a cruise liner full of party people heading for port. The pack has even captured the alarming ‘whiteness’ of the architecture on Mykonos, although it does rather give the impression of there being a missing colour glitch with your graphics card in the more inhabited areas. But hey, it’s the people that bring the colour to the island it says here in this tourist brochure. Since we’re still over the airport, let’s take a look at how most people’s first impression of this island paradise shapes up. Plain FSX offers the usual generic terminal block, airport tower and taxiways. To its credit, the layout it pretty spot on, buildings halfway along the runway and aligned in the right direction. But with the pack applied the terminal building actually looks like a working building, there’s appropriate airlines waiting to shuttle holiday-goers to and fro, the lighting pylons are spot on and there are even ground vehicles shuttling about. Anyway, enough faffing around the airport. Let’s explore the island. Without the scenery pack, there’s not much to actually see on Mykonos, barring the occasional animal-skin wearing biker gang attacking a precious fuel convoy heading for the only remaining human settlement in existence. Switch the pack on however, and things pick up. Teeming with life, ships moving in and out of the harbour, a couple of extra heliports to land on (including one on a boat) and all the signs of a teeming civilisation ready to do its bit to help the struggling Greek economy by fleecing tourists even more than usual (boom, satire!). Having to simulate the entire world including Grimsby obviously means that FSX relies on generic texturing a lot. That said, there are times when it can produce some strange effects, such as these ‘sand waterfalls’ masquerading as cliff sides at the western edge of the island. And the less said about that right angle island ‘corner’ the better. That same area with Aerosoft’s dedicated pack installed though, is naturally a better prospect. Outcroppings, inlets, cliff-top housing. Everything you could want from a holiday hotspot.

So there you go. Are scenery packs worth it? A good pack enriches the whole experience and often, as with the case of Mykonos here, offers hidden delights and bonuses such as extra airports (the two heliports provided here don’t even exist in vanilla FSX). Obviously you have to weigh up how much time you’re going to spend flying in and around the areas in question, and plump for the locations that you think will feature more heavily than others. Taking off and landing can often be the most intense parts of any virtual flight, and when the areas you’re carrying them out are little more than generically-coloured blobs, it does tend to lose the much needed atmosphere surrounding why you’re flying these routes in the first place. And yes, they can be pricey, often depending on how large an area they cover, but the results, as you can see here, speak for themselves.