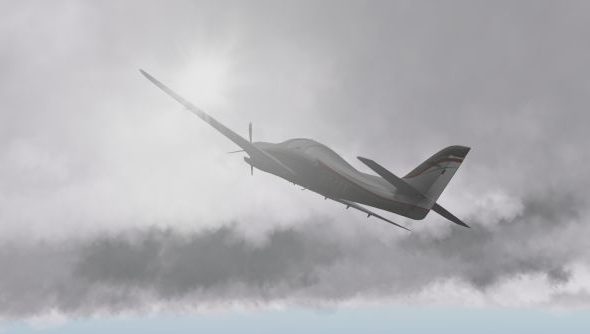 For the majority of flight sim fans, virtual piloting starts and ends with the Microsoft Flight Simulator series. Yes it’s the granddaddy, yes it’s got more devotees than a Devo t-shirt kiosk (ask your parents), but it’s by no means the only option on the shelves when it comes to making your civil aviation simulation decision.

Of all the pretenders to the throne, perhaps the biggest is X-Plane from Laminar Research, now in its tenth edition. The chances are that unless you’re a fan already, you’ll have dismissed it as just another also-ran and moved on. Which would be a crying shame.

While Microsoft was ruling the airborne roost over on PCs in the early 90s, X-Plane snuck up on the flight sim market via the Mac. It introduced in 1993 primarily as an attempt to create a similar movement amongst those notorious games players in the Apple community. Being Mac-driven, naturally there was an emphasis on doing things more intellectually than us knuckle-dragging cavemen using PCs (their words… probably).

This mostly boiled down to something called ‘blade element theory’. Most flight simulators (Microsoft’s included) relied on what was essentially a very complicated game of Top Trumps to create their flight models. Planes all have large amounts of numerical values assigned to them, covering their varying degrees of aerodynamics, ultimately representing their individual flight behaviour dynamics. This relies on those figures being available (often a hindrance for more advanced or military vehicles), so often you’re flying an aircraft modeller’s best guess at how the plane should behave.

X-Plane’s approach is more scientific. Blade element theory models the individual parts that make up a plane (most notably the propeller blades and wings) from mathematical point of view, looking at how lift, drag and so on affect each separate part of the plane and then combining it all into a behavioural whole. More often than not, each part of a plane is further subdivided into smaller and smaller sections to make the simulation even more accurate.

The biggest advantage this gave X-Plane is to allow it to include an aircraft creation program in the core product. Users could spend many happy hours building the aircraft of their dreams, then tweaking numbers here and numbers there and seeing what effect all the tinkering has on how it flies (usually like a house brick with gossamer wings in my case). So comprehensive is it, several real-world aircraft manufacturers use X-Plane’s software in their design processes.

What X-Plane did was to take everything Microsoft was doing, make it more intellectually rigorous and give the user the tools to make their own content right out of the box. Then they slapped an appropriately Apple-y price tag on it. It proved popular enough that a Windows version followed three years later in 1996, a Linux version in 2004 and today even features versions that work on iPads, iPhones and Android platforms.

You don’t hang around in flight simulation for nearly twenty years without building a community around you and for the budding X-Planer wanting to go beyond the provided material. There’s as thriving a marketplace of X-Plane aircraft, scenery packs and more as there is for Microsoft’s flight stable. It’s certainly large enough to have spawned both an amateur scene putting material out there for the love of it, and a monetised industry of third-party add-ons that have the veneer of professionalism applied.

Of course, the big question remains if you’re already getting airborne on a regular basis with one of the Microsoft Flight Sim titles, is there any point making the switch to X-Plane?

The answer depends on what you’re looking for in your simulation.

For the casual flyer, content to potter around the skies in a less than totally realistic manner, maybe not. Microsoft’s offering is friendlier to the newcomer, with an immediately approachable front end. It provides an authentic experience of civil aviation. The default scenery is better too, although X-Plane 10’s auto-generated urban sprawls are certainly a step up from anything it’s offered before.

Perhaps the most important point to make, though, is that one of these plane games has the advantage of having parents that haven’t basically abandoned their child at the doorstep of well-meaning strangers and are still around to provide their precious bundle of joy with a future filled with hope, dreams and regular product updates. Clue: it’s not Microsoft’s baby.

FSX was released back in 2006 and since then, Microsoft’s development team has been gutted like a Sicilian fish. Earlier this year, one last attempt was made to push a Microsoft-branded flying experience onto the masses. Unfortunately, Microsoft Flight was a pared down abomination of the highest order, unsure of what it wanted to be and, therefore, satisfying none. Admitting defeat, Flight was pulled last August and anything to do with keeping virtual planes in virtual skies was marched out of Microsoft’s doors for good.

While, Microsoft has plummeted back to Earth, Laminar Research has kept plugging away. Version 10 of X-Plane was released in November 2011 and the team in South Carolina has no plans on stopping.

So, if nothing less than the most ultra-realistic flight dynamics are your bag, you enjoy being able to tweak the forces that affect the middle section of the Space Shuttle’s left wingtip in isolation to the way the transonic drag rise currently affects the internal aspect of the… and you like the idea of the product you’re flying having the benefit of a development team that is still working on the thing, X-Plane is the choice for you. It’s a seriously meaty flight sim package for the most carnivorous of virtual pilots.