The best plane games is a pretty broad topic, so if you’re looking for a list of top flying games you may struggle to pick any single one out. Airplane games encompassing everything from complex flight simulators and meticulously detailed military facsimiles to arcadey jet fighter games and relaxing wingsuit sims.

To help you organise your thoughts and pick out something that suits your tastes, we’ve assembled a shortlist of some of the best plane games on PC, with a representative from all of the different niches. So whether you want to soar gracefully through the air for hours on end, settle down for a cosy evening of piloting a jumbo jet from LA to Las Vegas, or want a grizzly WW2 dogfight, there’s something for everyone.

As with many simulation-based genres – we’re looking at you submarine games – a lot of the classics can be tricky to get hold of and run on modern PCs, so we’ve tried to keep the majority of our entries modern for ease of access. 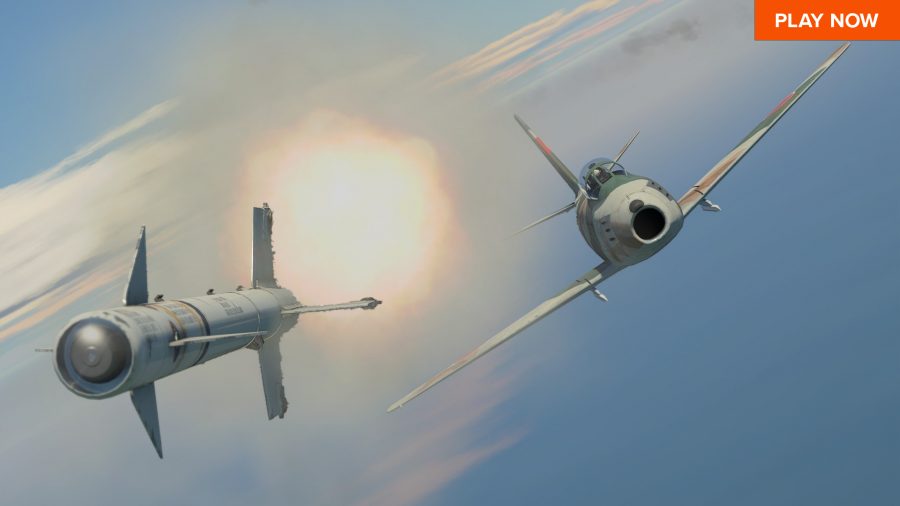 War Thunder now boasts tanks and naval battles, but it started out as one of the best free flying games around, and its flight physics, huge range of authentic aircraft, and realistic ballistics modelling are the proof.

In the seven years since War Thunder launched, developer Gaijin has continued to rework, update, and expand its roster of planes so it now includes aircraft from eight different nations and across six classes. You’ll need to use real dogfight tactics and manoeuvres to survive these multiplayer skirmishes, so master your Split S to get the drop on any novices. In fact, War Thunder is so good at vehicular warfare that it’s also made our list of the best tank games on PC. 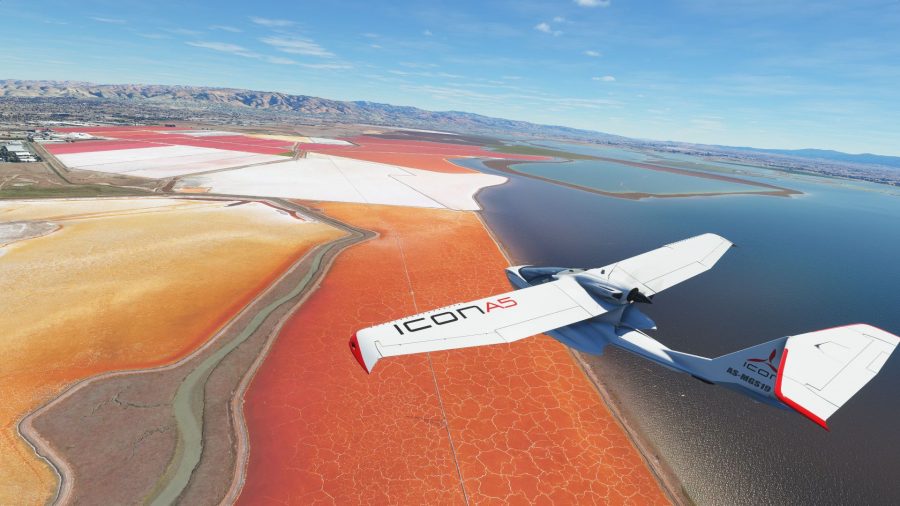 Microsoft’s long, long, long-anticipated flight simulator follow-up landed in 2020 and went on to receive some outstanding reviews. Our very own Microsoft Flight Simulator review notes that despite the rough loading times and plentiful crashes present in the review build, “none of it has dulled the game’s splendour or chipped away at the awe induced by the things I’ve planned, done, and seen in-between them.”

Seeing as the last game stuck around for well over a decade, we’ll take our time before concluding whether or not Microsoft’s latest effort deserves to take its place on this list – for now, we’ll keep them both in for good measure. 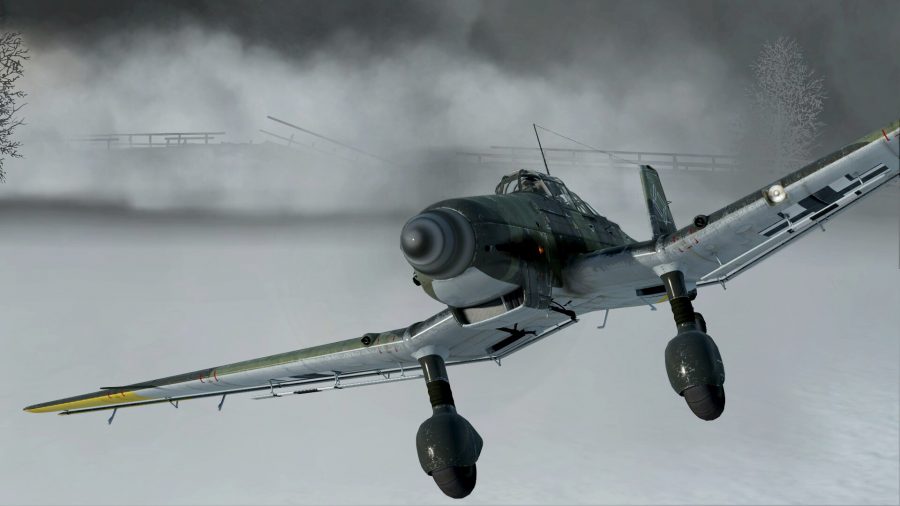 If you’re a fan of WW2 games then IL-2 Sturmovik is the touchstone for plane games set in the era. While it plays like a solid flight sim, IL-2 Sturmovik is also refreshingly accessible to beginners and its latest iteration does a tremendous job of drawing you in with its realistic graphics and damage modelling.

Small details like water streaming over the canopy when flying through clouds or AI enemy flying towards the sun to make you lose track of them go a long way toward making you feel like you’re really in the cockpit of a WW2 fighter. It also boasts a dedicated multiplayer community of dogfighters, so you won’t struggle to find a match. 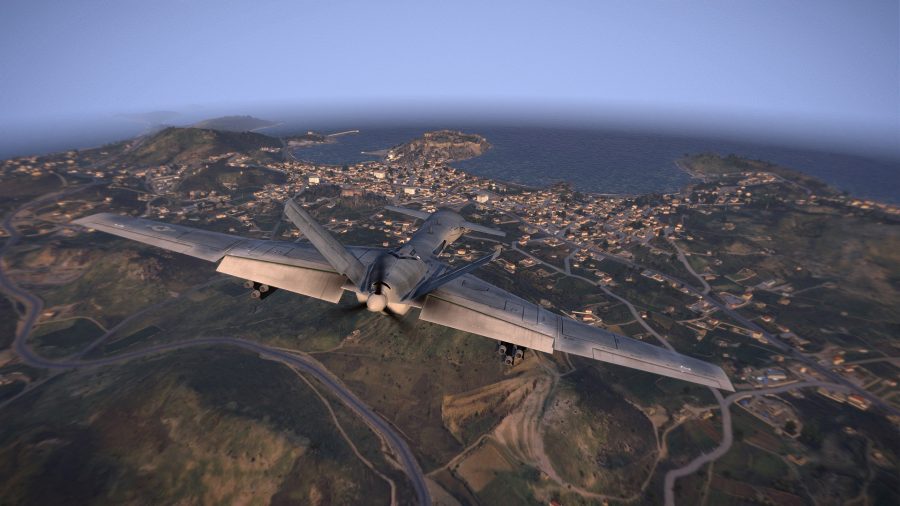 While most combat plane games focus on dogfighting, in Arma 3 you can jump in the cockpit of a jet fighter and help out on the battlefield by strafing heavy tanks and performing airstrikes. The flight physics and depth of mechanics don’t compare to some of the hardcore flying games on this list, but there’s still plenty of scope for mastery.

Air-to-air combat is mostly about managing your position and using a variety of missiles to take down targets from high above the battlefield. There is also a significant role for air-to-ground aircraft, with modern tech like laser-guided missiles and anti-armour cannons making good pilots essential on the battlefield. There are even plenty of helicopters should you tire of airplanes. 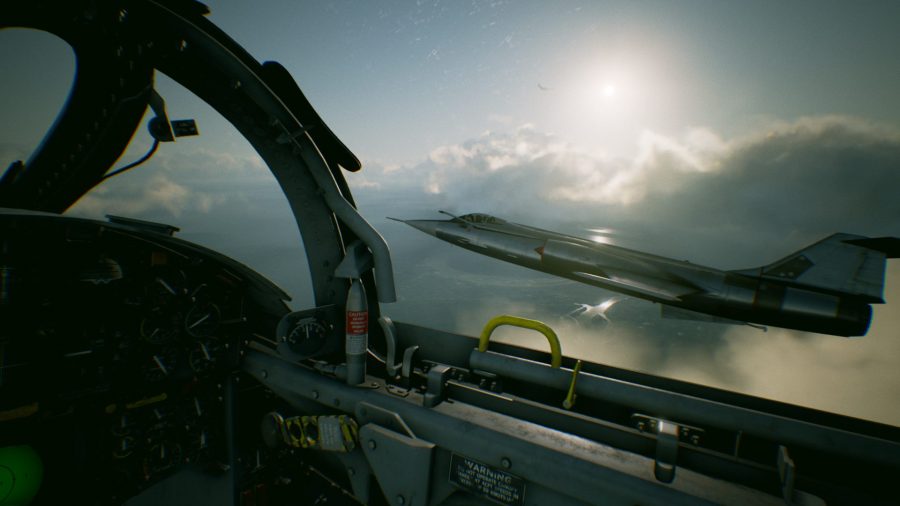 While it certainly looks authentic, the gameplay and story of Ace Combat 7: Skies Unknown is anything but. The story is baffling unless you’ve stuck with the series since its inception, so it’s handy that Ace Combat 7’s best assets are its slick visuals and breakneck dogfights.

Bandai Namco has done everything in its power to make the campaign missions as dramatic and overwrought as possible, leading to canyon dogfights, daring raids under cover of lightning storms, and the odd flyby between collapsing buildings. If you’re looking for some arcadey plane games and are willing to fully submit yourself to some stupidity then you can’t go too far wrong with Ace Combat 7: Skies Unknown. 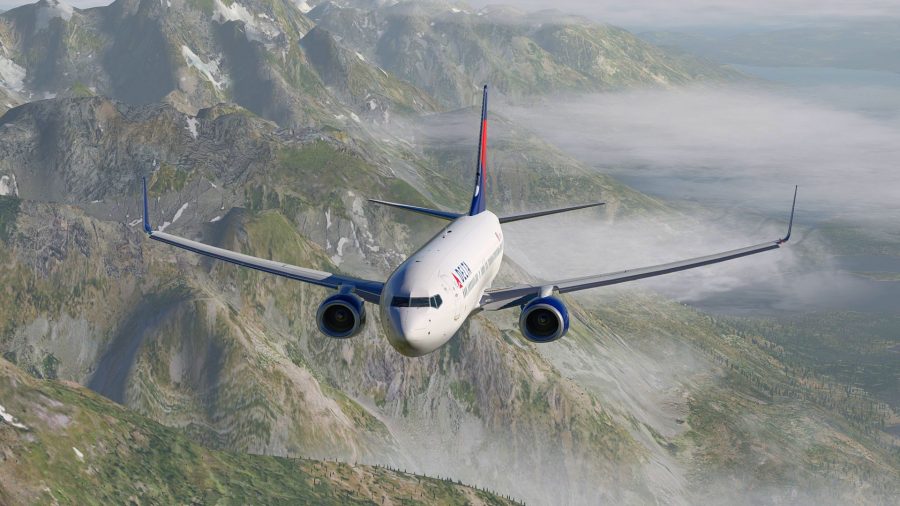 X-Plane 11 is a more modern take on FSX, with much-improved graphics, cockpit models, and a menu system that won’t leave you slamming your head on the desk before your first take-off.

In fact, there’s plenty more to enjoy about X-Plane 11 before actually flying – just sitting in the airport and watching the cavalcade of catering trucks, tugs, refueling tanks, and cargo trolleys moving about is endlessly engrossing. But it’s in the air where X-Plane 11 is at its most convincing, especially in light aircraft where you can really feel every bump, quirk of the plane’s flight characteristics. 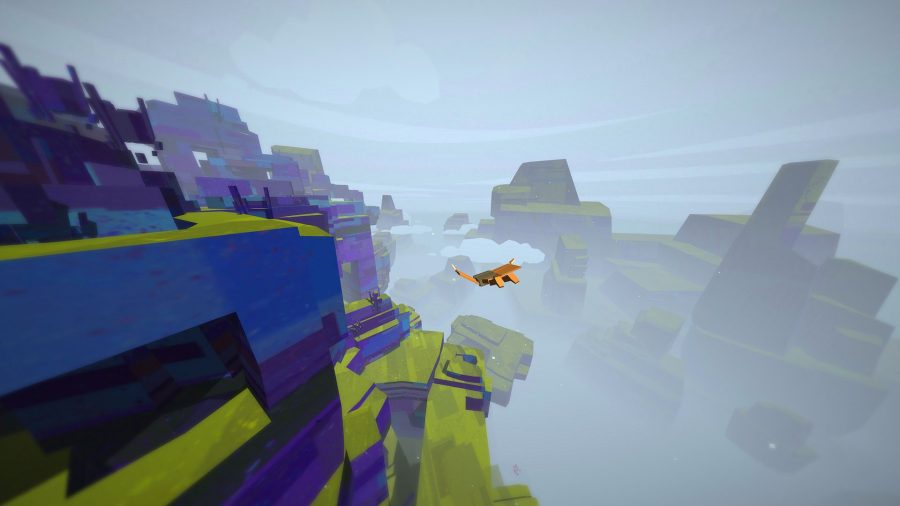 While there are no planes in Superflight, we’re adding it to the list for one reason: flying around in it feels phenomenal. Superflight is one of the most relaxing games around, which is impressive as it’s all about flying down a deathly hazardous mountain in a wingsuit and racking up as many points as possible on the way by flying close to rock formations.

Every level is procedurally generated ensuring there’s a constant sense of discovery, and if you find a seed you particularly like you can save it and challenge friends to beat your score. 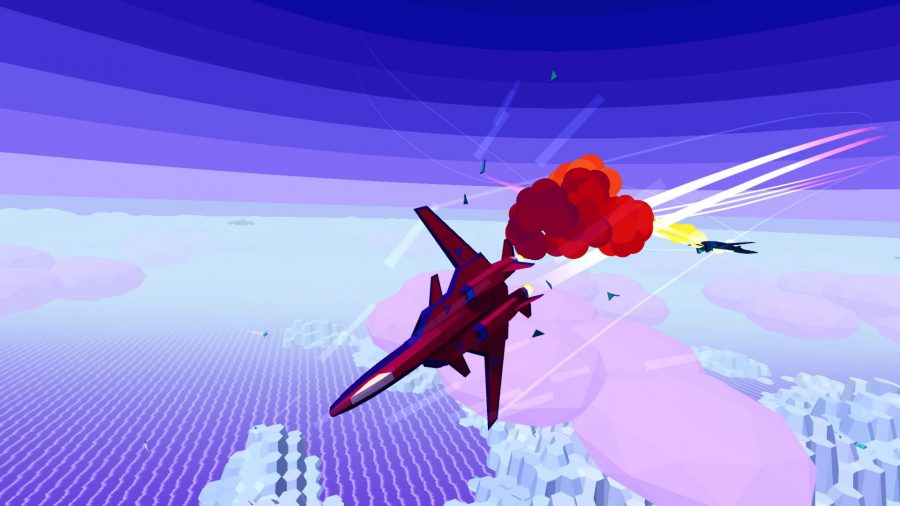 Few plane games abandon realism with as much reckless abandon as Sky Rogue, a neon-lit arcade fighter jet game that’s deceptively simple at first but hides some serious depth. Ahead of each procedurally generated mission you’ll pick your jet, customise the weapons system, and slap on a livery that brings out your inner Tom Cruise, then it’s a case of barreling around the level and blowing everything to kingdom come.

With 12 jets and over 30 weapons to choose from, it’ll be quite some time before you get bored of shredding enemy aces, battleships, and tanks. 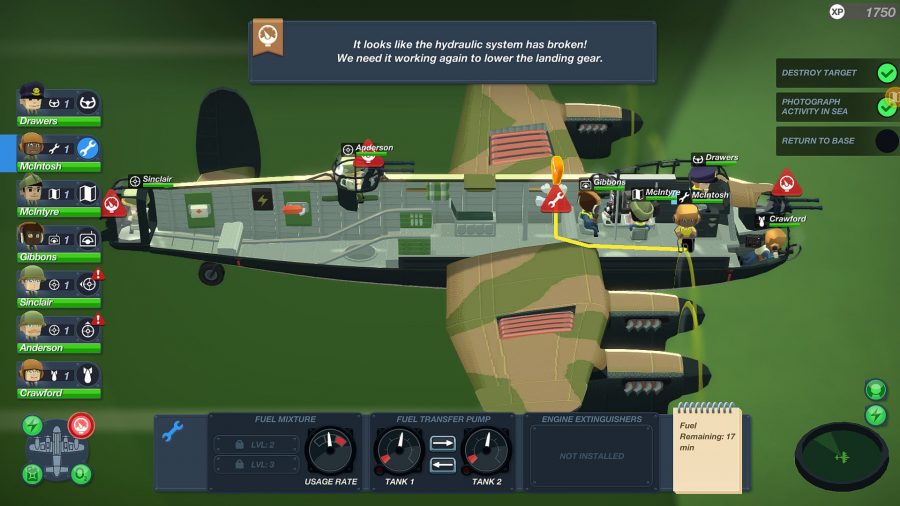 Bomber Crew puts you in charge of selecting and managing the crew for a WW2 bomber, going out on bombing, raids, and getting back to England with as few casualties as possible. During every mission you’ll need to manage the positions of each crew member, battle with enemy fighter planes, and ensure you’re flying in the right direction and height – too high and your crew will freeze to death, too low and you’ll be shot out the sky.

While Bomber Crew looks light and friendly, the smallest mistakes in this strategy plane game will very quickly lead to crew deaths. 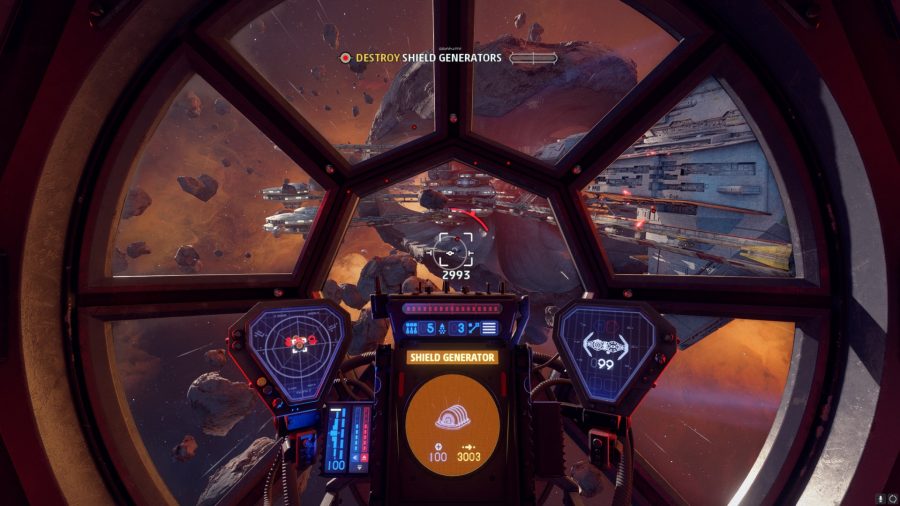 Star Wars: Squadrons is an arcade-style flying game with intense dogfighting at its core, epic space battles, and charm to spare. Gracefully taking down your foes and managing your power distribution feels fantastic, and while it’s easy to get into, Squadrons offers a relatively high skill ceiling.

The short-but-sweet campaign is enjoyable from start to finish, but it’s the multiplayer action that will keep you playing for months to come. It’s just a shame that EA’s post-launch plans don’t currently extend beyond simple cosmetics. Nevertheless, it’s still one of the best Star Wars games in years and a damn fine flying game to boot.

There you have it. Our list of some of the best plane games and flying games on PC. Hopefully, we’ve helped narrow things down for you a bit so you can install the right flight game for you without encountering any turbulence.