If there is a consistent thread in the changes that Football Manager 2022 – which you can buy here – makes to its winning formula, it’s that this is a brilliant reflection of how modern football works. Stats, staff meetings, and processes matter more than ever, but for all the hours you can pour into match momentum charts and xG curves, the only thing that matters is how the team performs on the field. And if you can’t react when you’re a goal down, if you can’t see the gaps in midfield, or understand why your wingers are constantly backtracking, then you’re going to struggle, your team’s going to turn on you, and eventually you’ll be looking for a new club to take you in.

That’s not to say that additions like the new data hub aren’t welcome, more that it complements an already robust, grounded simulation game. This new tab in the main menu bundles all of the tricky graphs, xG (expected goals) data, and pass maps into one quick-look page. An ‘ask an analyst’ option is hidden away in there too, which is probably the most powerful tool of the lot, returning a stack of graphs based on the keywords you type in. A creeping sense that your team is struggling to keep clean sheets can be turned into actionable objectives by simply searching for ‘defender’ and scanning a few graphs.

Despite hovering around the automatic promotion places, Fulham (or my Fulham, at least) have one of the poorest defensive records in the league. The culprit? We’re just not tackling enough, and in particular our star signing from Torino, Alessandro Buongiorno, has made the fewest tackles in the whole league. I could drop him, but his marking and aerial qualities are among the best in the league. Instead I adjust his training schedule to improve aggression and ground defence, and this helps a little, but a few matches later we’re still looking leaky at the back. Further investigation reveals that our back four aren’t getting much help from our defensive midfielders, who I’ve been playing in supporting and attacking roles all season.

These are only small steps in the right direction, but there’s no chance I would have spotted them without the data hub. It would be helpful if the backroom staff could suggest some more specific graphs to look at, or if the ‘ask an analyst’ option were more clearly highlighted, but once you’re aware of it you’ll find yourself referring to it constantly. 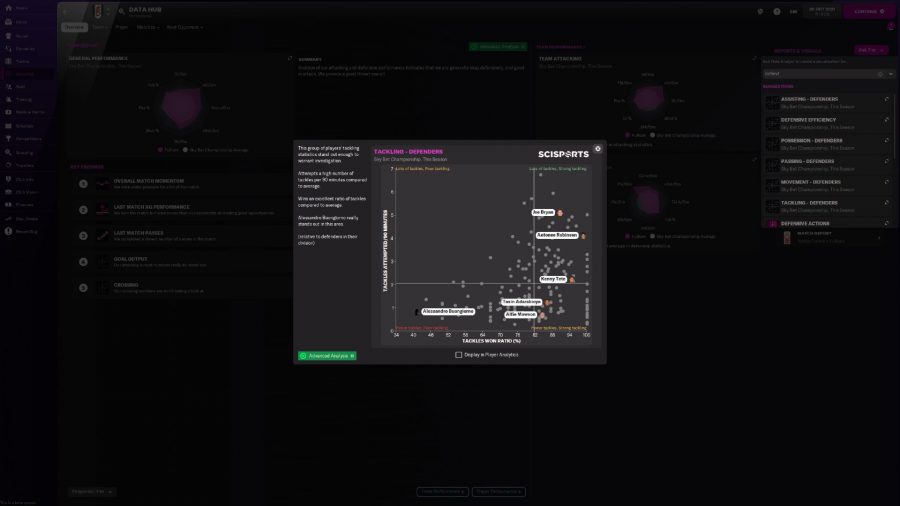 But for all the brilliant visualisations and learnings afforded by the new data hub, this is still football, and at some point you’re going to have to adapt to the unexpected. Like, say, if your cultured, deep-lying playmaker decides to put in a career-ending challenge and get himself sent off within the first ten minutes of the match. A good xG and a few fancy graphs aren’t going to help you out of that.

It’s in situations like this where the series continues to excel. Throwing your water bottle in disgust at the offending midfielder – a player of Jean Michaël Seri’s class really ought to know better – during the halftime team talk. Taking your star striker off to rebalance the midfield, hoping – nay, praying – that a pacier, more versatile forward like Bobby Decordova-Reid can help hit the opponents on the counter. Holding your nerve in extra time by sticking with a positive, attacking mentality rather than parking the bus, because you’ve seen the defenders crumble under too much pressure before. 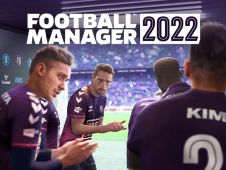 Fortunately, it’s a bit easier to relieve some of that pressure thanks to an overhaul to the pressing system, which now includes triggers so you can target specific opposition players whenever they’re on the ball. This is a godsend for gegenpress setups and counter-attacking tactics that rely on a robust, well-drilled team press in specific situations. It’s thoroughly well integrated, too, with pressing defenders reacting sensibly in transition and also aligning their press with team tactics like pushing the opposition out to the wings. 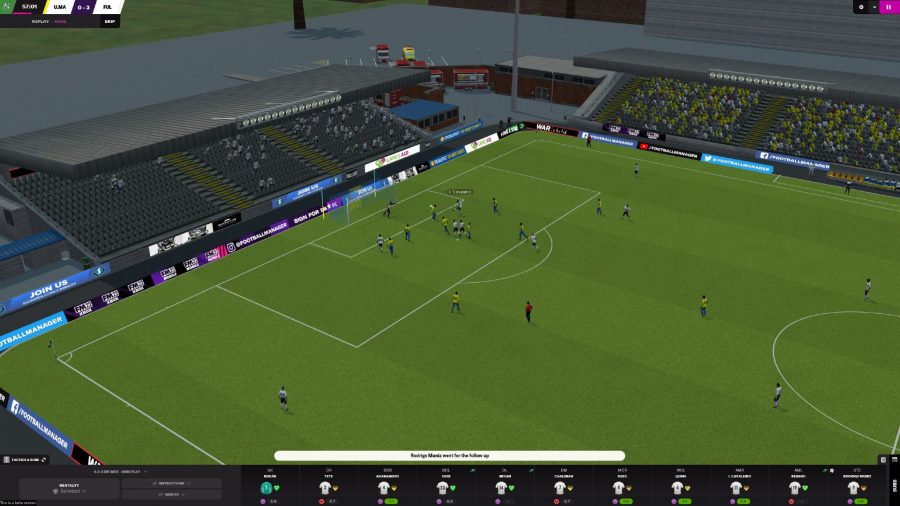 There have been a couple of blunders. I can recall watching in horror as the ordinarily no-nonsense Tosin Adarabioyo is dragged beyond the halfway line, leaving a gulf behind him that’s quickly filled by an opposition inverted winger, who bags an easy goal. Granted, this exact situation has happened to Tosin in Fulham’s current Championship season, so it’s definitely realistic.

this is still football, and at some point you’re going to have to adapt to the unexpected

Animation improvements in the match engine have built on last year’s huge graphical overhaul, making the flow of the match and individual performances easier to interpret. It seems like a small change, but players also pivot more realistically, so when your target forward receives the ball you can see them drop a shoulder and move into space, or back into a central defender and turn. The outcome of a move is the same, but it’s far easier to diagnose what’s causing a player to lose possession when you can tell if they’re turning into danger, being tackled too easily, or just fumbling their touch.

While the in-match experience is phenomenal, when you’re handling day-to-day matters like transfers, training, and press obligations Football Manager 22 can feel a bit like a slog. This experience has been improved on previous iterations by the new staff meetings feature, which rolls key updates from the rest of the management team into one streamlined session, letting you make bulk decisions and seek input on each matter under one roof. However, you’ll still be bothered by a ton of tiny updates each day that don’t really need your attention, and could also be rolled into these meetings. 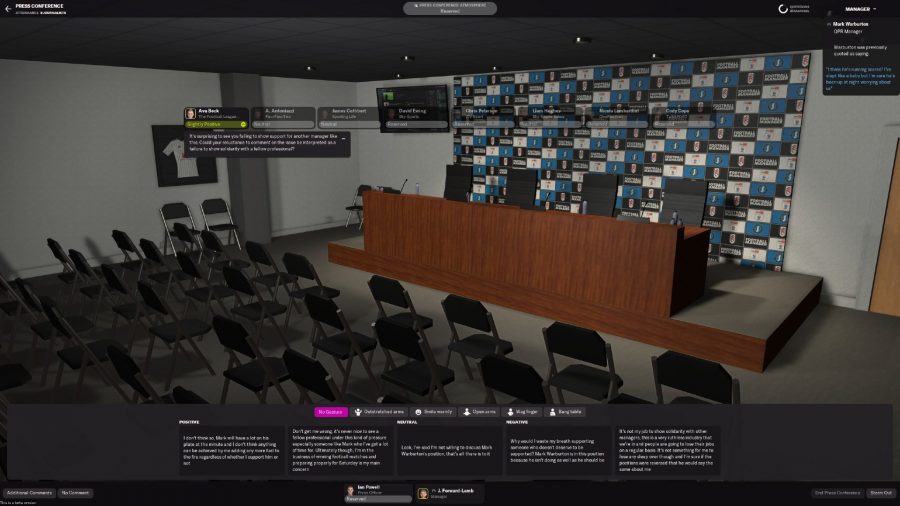 Similarly the media are a constant thorn in the side – no, the irony is not lost on me – regardless of how well the team’s doing. This won’t be news to series veterans, but the lack of meaningful choices combined with the sheer amount of press opportunities makes these interactions feel like a chore rather than a chance to buoy your players with praise or convince the club owners of your credentials.

One of the best additions is the new wide centre-back role. I say this despite the fact that my attempts to make it work with Championship side Fulham have largely failed. It’s an immensely demanding role that requires not only great attacking and defending qualities from the player, but also support from the rest of their team, especially in the wing-back position. Quick counter-attacking teams with inside forwards will tear you apart if you’ve not got the perfect setup and personnel. However, so long as your team’s in possession they’ll be able to overload the wings with overlapping and underlapping runs, finding the space and time to put quality crosses into the box.

A subsequent save with Serie A staples Atalanta, who helped pioneer the tactic under Gasperini, reveals just how effective the new role can be. It can lead to chaos in transition, but it’s downright electrifying when you’ve got the ball. By the end of some matches left-sided centre-back Palomino had spent so much time creating beautiful passing triangles in midfield with Mæhle that I’d forgotten who was the wing-back and who was the central defender. 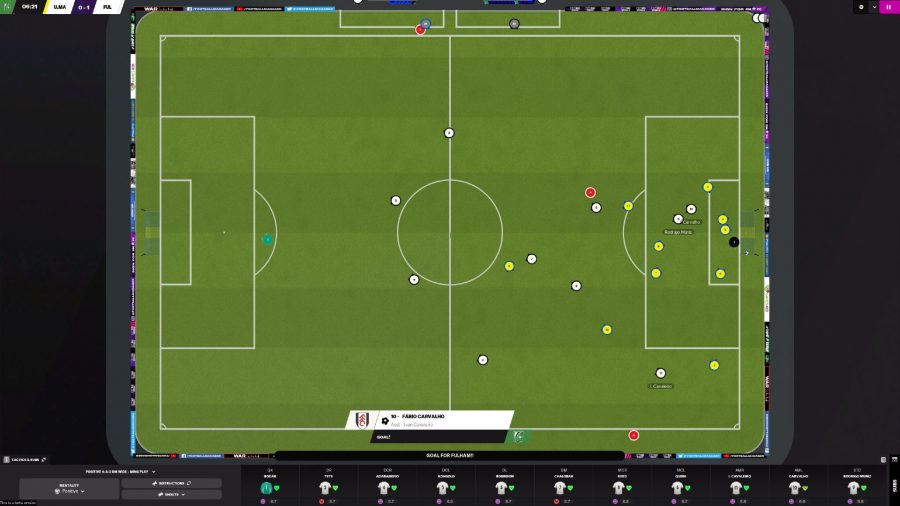 It’s a system that veteran FM players will have a lot of fun building around, and I’ve already spent hours trying to scout lower league prospects who could help me bring the style to Craven Cottage.

Other changes, like a slicker, more momentous transfer deadline day mode, and player values being presented as a range rather than a single arbitrary figure, feel like they’ve been a part of the series since its inception. They really sum up what Football Manager 2022 is all about: small, cherry-picked revisions that address a number of long-term complaints, and improve some aspects I never knew I wanted. It’s the same great football management game, but better, and next year’s will probably do the same again. You know the deal.

With more tools at your disposal than ever, this is a rich, realistic management simulation that delivers thrills both on and off the pitch.