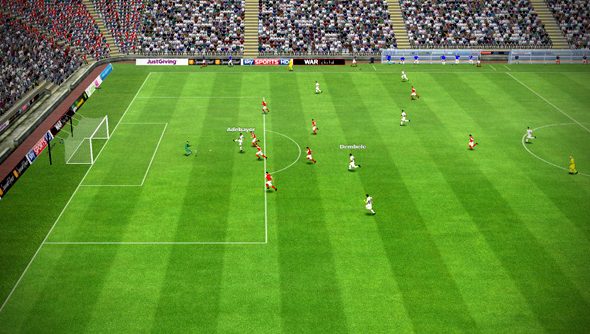 Perhaps it was the wrecked relationships; the broken lives. Or maybe it was just the bloodshot eyes of their own development team resigned to staring at lines of code, only to spend their spare time with retinas locked to the experience they create. Whatever the motivation, with Football Manager 2013, Sports Interactive decided we needed a new way of playing – a return to the more disposable, dare I say fun, way of experiencing the monster they produce each season.

And so Classic mode is born – a throwback to SI’s creations of yesteryear, which used to suck you in without emptying you out. The hardcore will grimace at the prospect, no doubt. They will throw scorn at the idea of a diluted version of the game they love, tainted further by purchasable “accelerators” – or cheats by another name – that allow quick fixes and fantastical scenarios to be realised within what has, for so long, been such a rigid, disciplined experience.

But they need to get over it. With FM13, Sports Interactive have been mindful of their loyal legions and have kept the full mode safe in quarantine. There’sno cheats to be found, just further layers of detail, careful streamlining and an array of improvements that aren’t totally honed, but justify our season ticket nonetheless.
While the full Career Mode remains a relationship that requires careful nurturing, balancing of the books, and the right tone of voice at the right time, Classic mode comes as light relief – it’s the mistress that gratifies and demands little from us in return. A hardcore player can easily invest their hours in a full game, whilst keeping Classic Mode as their fanciful bit on the side.
It all sounds exhausting. Two clubs. Two games. One life. But we took it on.
Our Classic Mode destination was Barnet. A ramshackle outfit, tipped by the bookies for the drop from League Two. In full Career Mode, we ousted Arsene Wenger, taking the reins at the Emirates to see if we could revive the roar that died at Highbury and get the Gunners back amongst the true title contenders. How would FM13 play out over these two scenarios? How much of our life would be ravaged at the end of it?
Within minutes of our Emirates experience, it’s clear that while SI have reserved the real streamlining for Classic Mode, they’ve applied the same principles to the full Career Game, without compromising on depth. Our welcome to the job is graceful. The Chairman greets us. I’m on £96k a week and for that princely sum, I’m expected to deliver European football. A series of follow-up messages finds me in a meeting with Steve Bould, my loyal assistant boss who informs me of how he can really “assist” me. It’s skillfully done – within minutes I’m in the job, I know what’s expected and thanks to “Bouldy”, I’ve palmed off some of the tasks I’d rather put to one side.
Bouldy will be briefing the team on our opponents but he could have done so much more for me – training, handling the press, arranging friendlies. My next meeting has me in front of my backroom staff and it’s clear again: SI have got these guys working for us this season. There’s more advice but crucially, more opportunities to get them involved. Delegation won’t come easy for the control freak, but it allows us to skip menus and concentrate on the areas that matter the most.
Over at Barnet, I’m greeted with an anemic tea with one sugar and a quick chat with the Chairman. I’m on £825 a week and expected to save the club from slipping back into non-league obscurity. It’s a very different start – there’s a nasty draught in my office and the media suite looks suspiciously like a VHS recorder. Away from such imaginings, the Classic Mode greets us with it’s own UI, suitably streamlined to include only the crucial information.
In the hour it takes me to realise that Arsenal’s £30 million budget won’t quite stretch to an out of the box world class striker, I’ve already recruited a new scout, made a first signing and played three pre-season friendlies over at Barnet. I’m freed up from the toils of training, team talks and press conferences to concentrate instead on scanning the market for talent on a shoestring and orchestrating matters on matchday.
In many ways, it will feel like coming home for some. You’ll be back enjoying an FM experience akin to the SI creations that robbed you of times when lectures, a social life and finding yourself beyond your monitor should have come first. Back then, we were perhaps free to burn those hours, but as a “responsible adults”, the FM audience will welcome the opportunity to get 10 games into a season before their strictly allotted free time is exhausted. While surrendering control jars a little, SI’s inclusion of match plans in Classic Mode is a stroke of genius. Here we can set up tactics and formations according to match scenarios, hand them to our assistants and then call on instant results on matchdays. It’s a shortcut but SI have at least granted some control, some ability to craft a strategy. It means I can get to Christmas with Barnet before I’ve even navigated through Arsenal’s pre-season.
My time at the Emirates is undoubtedly thestuff of menu-driven exhaustion but the immersion in the world they create is as strong as ever. FM13’s new skin is somewhat troubling but, around it there has been some careful streamlining – not least on Matchday, where pull-down menus allow for quick substitutions and tactical tweaks. Training has been overhauled to cut down some of the micro management. I can assign this to my assistant but, should I want to tweak, I now just set weekly schedules and pre-match drills via a calendar view, with a single slider controlling the balance between the two. Player training is centred on a specific role or attribute – there’s no complex programmes to build. This will frustrate those who enjoyed such meddling but the overhaul seems a step in the right direction – albeit one that will doubtless earn further refinement in future versions.
Matchday remains crucial to the FM experience and while SI promise an overhaul of the AI, this has perhaps inevitably led to some snagging. While at Barnet, Classic mode treats me to a new highlights mode that typically cuts to the chase, over at Arsenal I’m free to soak up the match experience in more detail. The improvements I see are subtle and slow burning. Enhanced animation and ball movement is immediate enough but it takes time to unwrap SI’s labours on off the ball movement and pass selection.
This is another step forward, no doubt, but there are annoyances. While attacking players move with more purpose, defenders can sometimes appear static and fail to track runs. Goalkeepers parry too often, with opposition strikers frequently benefiting, while the crossed ball seems too potent a weapon that needs dampening down in patches to come. None of these are fatal flaws but they can nag over prolonged play and reduce the overall impact of the improvements on show.
As the matches unfold at Arsenal, Bouldy is firing me tweet-like prompts nagging me about giving Tom Huddlestone too much space on the edge of the box and informing me that Oliver Giroud is having trouble settling. It’s another admirable attempt to offer feedback on events, to decode the zeros and ones that govern the action being played out. Like other improvements here, it’s the right direction but needs refinement.
While the amount and type of messages can be controlled, the value of some of the tactical advice can be lost in midst of battle. Key messages need to be held longer, with quick links to screens that allow you to react to the advice. Right now, it can feel spammy and just adds stress to matchday – it’s like Bouldy is throwing me plates and asking me to keep them spinning whilst I’m figuring out what the hell to do with Gervinho. Post match, I’m faced with press conferences that now allow me to pick a tone for the delivery of my multiple choice entries. Again, this feels somewhat raw. While I instantly receive feedback on my team-talks, the repercussions of my press statements are buried – the tone I select is seemingly meaningless aside from the cursory mention in the repeated summary message.
Over at Barnet I’ve no such distractions. The season moved at speed but was spiraling into disaster, with just nine points on the board by the time the tinsel came down. Perhaps I was crying out for an unlockable – the ability to boost my ailing transfer budget for example. It costs real-world money to cut this corner – something that’s perhaps just as dubious as the act itself. But then purists will be damning of such a feature, the Classic Mode may well breed another type of FM fan that will welcome such a deal. For now, it’s like selling a Big Mac at a food festival: we’ll all turn our noses up, but perhaps sneak back later to take a bite in a moment of weakness.
Even without these shortcuts, Classic Mode feels liberating and baggage-free whilst alongside it, the full game is as glorious as ever in its depth and detail. These are two very different experiences that can be combined, just as previous FM’s have been juggled with the handheld versions. Indeed, the inclusion of challenge modes inspired by the mobile game adds a third string to FM13’s bow and, when coupled with improved multiplayer, it’s clear that SI have gone all out in an attempt to get FM back in the lives of those who had decided that the game was too big a commitment.
Ironically, FM13 is as big as it ever was. Now there are just new ways it can wheedle itself into your life. Whether you pursue a full-time relationship, or lose yourself in fleeting dalliances, FM13 can cater for you. The new ideas need further finesse but there’s enough here to cement the seemingly undying love of its fanbase, whilst tempting back those who had thought they had outgrown it and rid themselves of its complex charms. A season to rethink and rekindle.