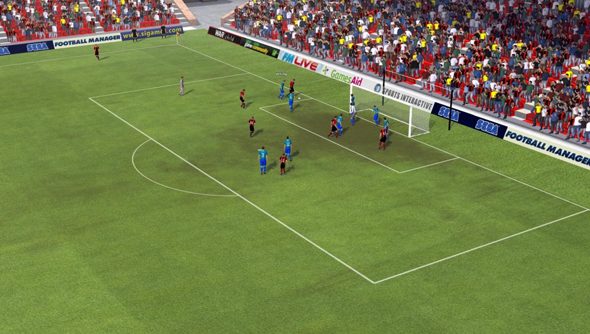 Battlefield 4 was a boxed PC game that came out last week. But despite levelution, despite umpteen trailers, it was ultimately no match for the quiet landslide that happens when the latest iteration of Football Manager hits shelves in the United Kingdom, where people famously quite like football.

The top ten boxed PC chart last week saw Football Manager take the top spot and Battlefield 4 settle for second, while Rome II and Rocksmith held up fifth and sixth places respectively. Every other position was held by a Sims release of one kind or another.

That’s without taking into account Football Manager’s online sales – and it doesn’t seem too far a stretch to suggest that Steam has been responsible for a phenomenal proportion of them. 64,492 Steam users were playing FM atits peak today, leaving it the third most-played game on the service, behind just Dota and TF2 and ahead of any version of Counter-Strike you’d care to name.

The all-formats chart told a similarly successful story, in which Battlefield retained its spot as runner-up, but Assassin’s Creed: Pirates! replaced FM at number one. There, Football Manager could be found in sixth place, below only blockbusters like FIFA, GTA, and the new Batman.

Here’s the top ten boxed PC games according to UKIE for the week ending November 2nd:

I must confess to buying a boxed copy of The Sims 3: Seasons for a loved one last week, so I’m at least partially responsible for the homogeneous state of that list.

Did you buy Football Manager in a box, or in its Invisible Edition? And did you have any trouble with code activation or region locks?

Thanks to PCR and MCV.