I’ve been twirling around with kusarigama and stabbing guts with gladii in preparation for the second season of For Honor, Shadow and Might, which kicks off today, at least for season pass holders. For everyone else, it’s due out next week. Two new classes are joining the fray, along with epic custom gear and a couple of maps waiting to be drenched in the blood of countless perpetually angry warriors. First impressions? For Honor is still very much my cup of tea.

Related: our For Honor PC review.

The highlights are undoubtedly the new classes. The maps and epic items largely fall into the category of ‘ain’t it purdy’, not really bringing anything fresh to the table. It’s more stuff, new places, new items to unlock, more excuses to keep playing, but none of this has any tangible impact on the moment-to-moment gameplay.

Not so the Shinobi and Centurion, however. Let’s check in with the former, first. This masked ninja feels like a response to players who felt that For Honor was a little sluggish. That’s kinda the point, I feel – it’s a game of armoured warriors getting into duels, after all. But a bit of diversity is still welcome, and that’s definitely what the Shinobi brings. It is, unsurprisingly, an Assassin, role-wise, like the Orochi, Berserker and Peacekeeper, and is especially like the latter – a fast, nimble duel-wielding combatant. But it’s also entirely unpredictable. 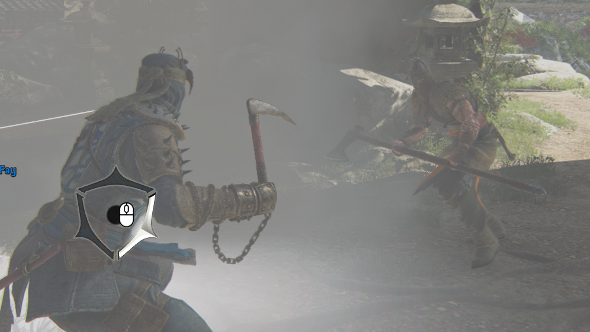 At close range, the Shinobi can put a lot of pressure on a foe with their lightning-fast attacks, but their real strength is in counterattack skills. Deflect an attack and you can teleport behind an enemy while cutting them, inflicting a bleeding debuff and getting into a superior position from which you can unleash some more combos. Time it right and you can also end the teleport with a swift kick, knocking your opponent back. This can be used to give yourself some breathing room, but it’s not just defensive. Kick them when they’re standing on the edge of a river or a cliff, for instance, and bid them farewell.

What makes the Shinobi a really interesting class is its ability to switch stances. Not keen on the idea of running right up to the brutish Shugoki? No problem. The kusarigama is a ranged weapon, too. The sickles are connected by a chain, so it can be tossed to punish foes from a distance. This is handy if you want to stay out of an enemy’s grasp, but it’s also helpful if you want to close the gap. Think Scorpion’s classic Get Over Here attack from Mortal Kombat. The super sprint serves a similar purpose. Hit the sprint button twice and the Shinobi will move with preternatural speed, perfect for both chasing fleeing enemies or getting the hell out of a dangerous situation. 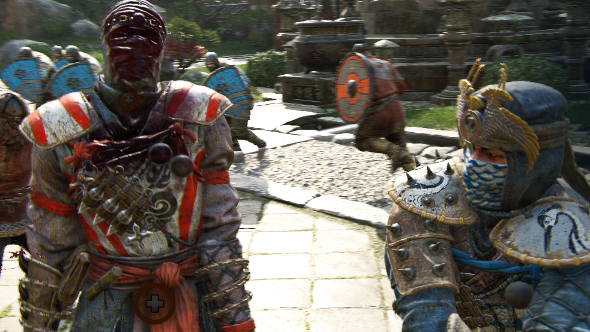 Double dodges, backflips, teleports – the Shinobi has a toy box full of tricks, but this also makes it a challenging class to play. There are so many options, it can be hard to figure out the best approach in the middle of a tense fight. And all it takes is a split second of indecision for the squishy ninja to get carved in half by a meatier opponent.

As fun as it is to slice and dice enemies with the Shinobi, I’m less enthused about facing them. They’re a bit annoying, frankly. So much jumping and twirling and running away. If a Shinobi player is doing their job, then they’ll be a frustrating adversary rather than an entertaining one, and if they aren’t, then the fight will probably last ten seconds, which isn’t any more satisfying. The other classes shine the brightest in tense duels, circling their prey, patiently waiting for that opening, but ninjas don’t have time for that nonsense.

The Centurion, a beefy Roman scrapper, is more conventional. He likes to get in close with his gladius and stab, stab, stab. After cutting up fools with the Shinobi, he’s not quite as thrilling, and even his combos are a bit staid, visually, but from a tactical perspective he’s actually an interesting fella. 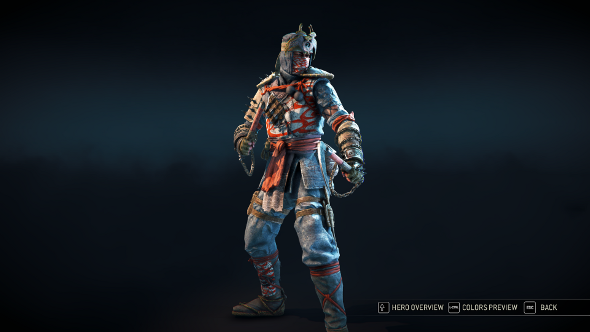 When fighting the Centurion, you’d be forgiven for mostly worrying about his blade, but he’s just as deadly with his fists or the butt of his sword. He’s a fan of punching, grabbing, and crushing faces, draining his opponent’s stamina so he can finish them off while they’re staggering about like they’ve just fallen out of a kebab shop at 3AM.

He pushes people around like a heavily-armoured bully, knocking them about the battlefield before jumping at them and planting his sword in their chest. A few of his combos end with a nasty unblockable stab, too, meaning that you’ll need to be quick on your feet, dodging out of his way rather than trying to defend yourself with a weapon or shield. Easier said than done when your stamina bar is empty. 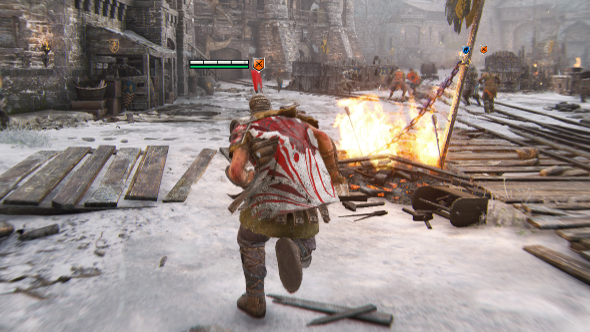 Being a Centurion means constantly serving up beatdowns and never letting other warriors keep their balance. There’s a dizzying momentum – combo, grab, stun, push, unblockable assault. If an enemy gets away, throw in a jump. He might not be as fast as the Shinobi, but he’s surprisingly competent at closing gaps and chasing down cowardly adversaries.

Both of the new classes have one thing in common: they feel like they’re all about control. They create opportunities by keeping enemies off-kilter at all times, whether that’s by hooking them with a sickle and dragging them into melee range, or smashing up their face until they’re too tired to swing their sword. It’s going to take a while before I really feel like I’m making the most out of them though, particularly the Shinobi with its more exotic moveset, but I anticipate having a lot of fun trying.