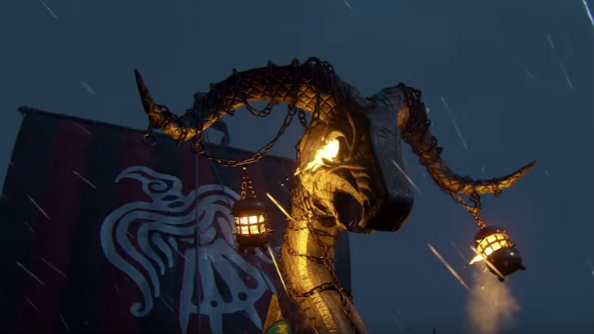 A new teaser trailer has released for Ubisoft’s melee battler, For Honor. It gives us a fleeting glimpse of a Viking longboat and not much else.

Wondering what else is rising over the horizon? Check out our list of upcoming PC games.

Remember last year when we got a pretty extensive first look at For Honor, with multiplayer demos, a developer chat and even a full-on trailer? Well Ubisoft seemingly doesn’t, as they’ve just released a tiny new teaser trailer.

The teaser in question shows us a Viking boat. Well, we see its sail and we also get a glimpse of its dragon-shaped figurehead – complete with burning lanterns to strike fear into the enemy – but that’s it.

It’s not much to go on, but perhaps the teaser hints that there’s more to For Honor than simple melee scraps between knights, samurai and Vikings. Maybe they’re using some of that Assassin’s Creed: Black Flag experience and having ship-to-ship combat, or perhaps the Viking faction will speed into battle on their ships. Or maybe Ubisoft did actually forget they showed the game off last year. Who knows.

Have a watch below:

Tune into Ubisoft’s E3 conference on Monday, June 13 at 1PM PDT for new For Honor announcements. Let us know in the comments what you think the teaser means.