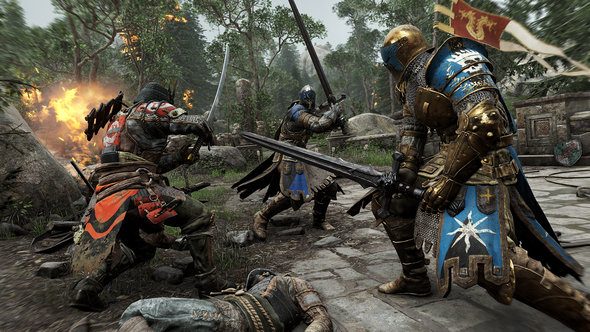 Ubisoft’s upcoming ultra-violent sword and axe brawler, For Honor, has just had three new heroes added to its roster. Split over the game’s three factions, the new heroes boost the number of playable classes up to 12 and dabble somewhat in the World’s established lore, particularly with the enigmatic Valkyries.

Hungry for some armed conflict now? Check out our list of the PC’s best wargames.

Each new hero carries a polearm weapon, filling the gap between the roster’s heavy and light combatants. The Nobushi seems particularly agile, wielding a naginata spear and using it to leap and bound about his opponent, landing cut after cut. Clearly inspired by the executioners of yesteryear, the Lawbringer wields a pole-axe and strolls into battle like a medieval Darth Vader, smashing and swinging his way into the enemy. Finally we have the Valkyrie, fearlessly leaping into the fray, these mystical warrior-maidens carry a simple spear and buckler, seemingly sitting somewhere between the other two classes.

At this point, it is somewhat difficult not to draw comparisons between For Honor and 2012’s Chivalry: Medieval Warfare. Both games have four separate classes for each faction, which seem to broadly fit into the same categories. But where Chivalry focused on the assault/defend dynamic of games like Team Fortress 2 and Overwatch, For Honor seems much more geared towards epic player-on-player duels, away from the general fray of combat.