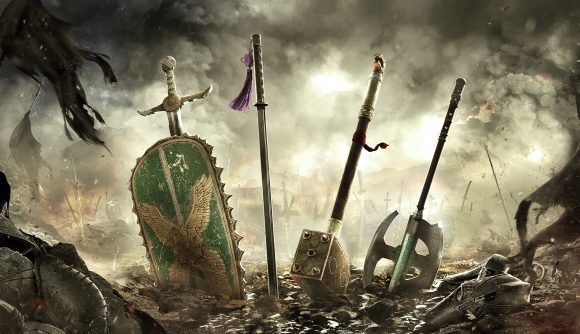 For Honor is about to hit its third year, and Ubisoft has plans for another annual rollout of new content. This time it’s the Year of the Harbinger, and it’ll bring another four seasons worth of content updates, complete with new events, new maps, and new heroes across each of the factions. The initial roadmap is hazy on details, but it does include hints about what to expect. Season 1, Vortiger, will launch on January 31. That’ll offer up a new Knight hero wielding a sword and shield.

Details on the remaining seasons are even lighter, though the key art clues us in on each hero’s weapon. Season 2 will have a Samurai hero with an axe, 3 will bring us a Viking hero with a hammer, and 4 will provide a Wu Lin hero with a sword. Notably, all four heroes will be available in male or female variations, so you’ll a few more options in choosing your look.

Oh, and the Halloween event will be back next year, too.

For Honor player counts have gotten to healthy levels on Steam over the past few months, thanks in part to updates like Marching Fire. Certainly, the game’s population across all platforms has been enough to keep Ubisoft on board for another year of content, so everyone’s got something to look forward to.