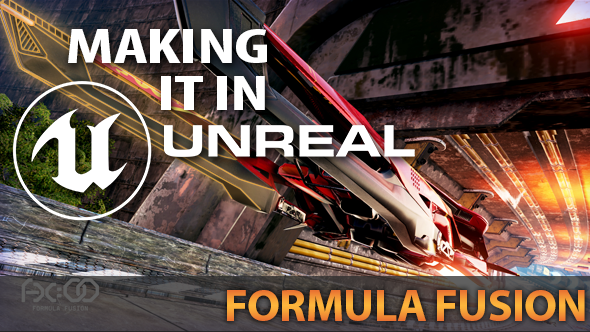 So you want to make an anti-gravity racing game. And why wouldn’t you? Wipeout was a blast. There are some things you should know, though: physics middleware isn’t really designed to handle anti-gravity. The tracks your players will be racing on fly by so fast they need to be many kilometres in length. And speed itself? That might be trickier to get across than you think.

Related: the best racing games for 2017.

R8 Games have had to face all this chicanery over the course of Formula Fusion’s development. Here’s how they navigated it.

Inventing a better sort of physics 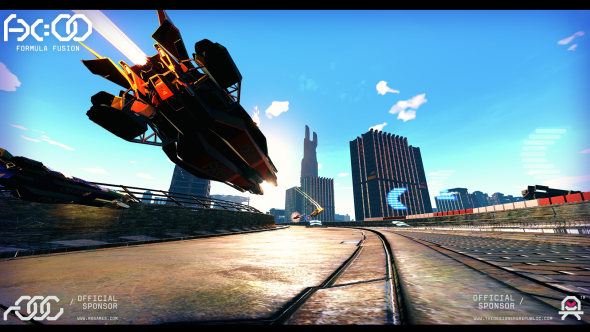 “Unreal Engine 4 has not been built with our kind of racing game in mind” says R8 game designer Carlton Gaunt, “having to travel at the kind of speeds we offer.”

The wobbly heart of the problem is physics. Existing physics solutions and middleware are intended to replicate the forces and motion of the real world, which is exactly what R8 don’t want. The real world, it turns out, is quite disappointing when it comes to anti-gravity vehicles.

“When you’re trying to make an anti-gravity racing game, it’s not real, that’s the whole thing,” points out executive producer John Purdie. “There’s a certain amount of drift when you go around a corner naturally, so you can’t rely completely on physics.

“It’s a bit like a visual effect for a film, where the director says, ‘I want it exactly like the real world,’ gets it back and says, ‘No, I didn’t mean that at all.’”

Thankfully, Unreal 4 is open source, allowing R8 to implement their own post-Newtonian mechanics. While the collisions that define how craft and weapons interact with each other are held in-engine, the physics under the hood of Formula Fusion is entirely proprietary.

Gaunt explains: “Creating our own physics engine allows us be masters of the world, essentially, and create something that is, well, believably not real.”

Laying roads fit for the future 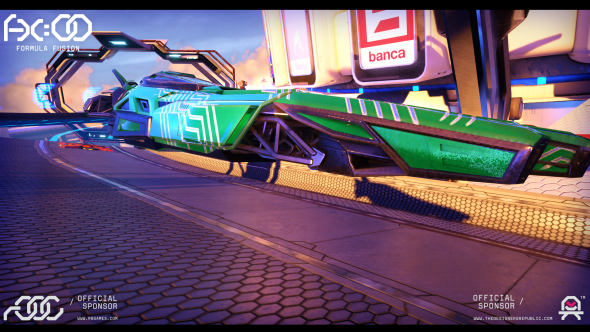 Creating tracks for Formula Fusion is an awkward process, simply because of the scale involved. R8 start with just a spine – a curve in which they embed slaloms, chicanes, s-bends, compound turns and jumps.

The team keep going until they have something that looks fun – then get it up and running in the engine.

“We know going in the kind of lap times that we want,” notes Gaunt. “We’ll have no sense of speed at this point. It’s just finding out if the simple idea of the track has the potential to be engaging.”

The level designer goes back and forth with R8’s art lead to work out where the key art assets are going to go – though at this point the background environment is just bare blocks, far from the neon wonderland of Formula Fusion’s finished tracks. Then the team build a ‘red route’: a close-to-finished version of the track without any visuals. A crimson road against a white backdrop.

“This is the point we get our first sense of speed,” says Gaunt. “They’re not very good these tracks, yet, but we can get around without smashing into anything.”

Bioshock players might remember, as they first took the bathysphere down to Rapture, the whale that swam between the city’s tallest buildings. That whale was rendered in the most basic possible fashion by Irrational’s art team, since the developers knew it would be onscreen for only a fleeting moment. Yet that moment was long enough to achieve the intended effect.

R8 have their own Bioshock whales – not literally, but segments of track where they know art assets will pass by in a blur, and therefore need less detailed work.

“It does wind up sometimes being not intuitive,” Gaunt explains. “If we have a huge straight, we think players would barely see an asset near the beginning – where in fact they’ve just finished making a turn, so they’ve had to slow down and see it.”

The team save their most lavish art pieces for the gnarliest corners – the ones players have to slow down for. 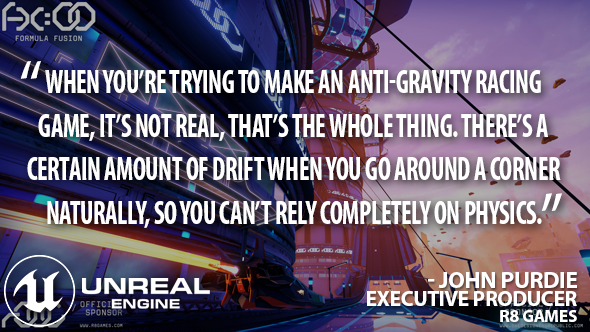 “If we have a track that loops around over a particularly complicated set of turns, we know that the player’s going to spend a lot of time there,” says Gaunt. “Any bespoke asset in the environment will get a lot more mileage if it’s in this area.”

About two weeks into a track’s development, R8 place the boost pads and weapon pickups that make the track ready for players, before handing it over for testing – first among the team, and then among their earliest Kickstarter backers.

It’s only then that the track goes through a more conventional production pipeline. Final assets are designed, a sky is built, and the environment is populated. At last, the course takes on the glowing palette that characterises Formula Fusion.

“A lot of the beauty comes into the track,” finishes Gaunt.

The feeling of fast 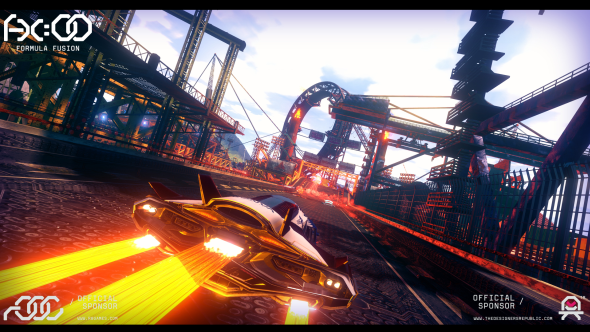 Ultimately, Formula Fusion is about a heightened sense of speed that more grounded racing sims can’t match. R8 try and reinforce that sense everywhere – from the aerodynamic craft covered in wings and half-spoilers, to the background zipping past.

“A lot of the visual cues on speed end up being environment-based,” reveals Gaunt. “Things like track textures with a very quick stripe pattern on them – you’ll see them fly by really quickly.”

In the middle-distance, objects like streetlights, poles and fences – all slim and quick to pass – help to provide further context for the speed you’re travelling at.

“We can amplify this kind of reinforcement with visual effects like motion blur,” adds Gaunt. “We have a camera system as well that slightly distorts depending on your speed.”

As you put your foot on the pedal, the camera pulls back – while simultaneously zooming in.

“It’s a film effect more than anything,” says Gaunt. “It winds up distorting your field of view such that your subject, in this case the craft and the pilot you’re looking at, stay roughly the same size, but the environment in the background warps ever so slightly so it looks like it’s passing much faster.”

“That’s what the game’s all about, so we try to build that into every part of the game – not just audio and visual.”

In this sponsored series, we’re looking at how game developers are taking advantage of Unreal Engine 4 to create a new generation of PC games. With thanks to Epic Games and R8 Games.