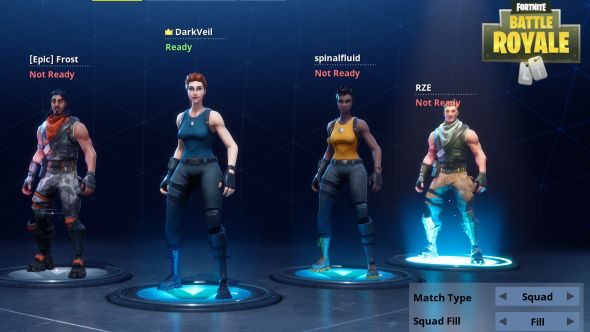 Fortnite’s been killing it lately. Epic said it was on track to be their most successful game ever, and that was before the introduction of its free competitor to PlayerUnknown’s Battlegrounds. The team promised Battle Royale would be getting duos when it hit a certain player threshold, and it seems that time has come.

This comes just days after Fortnite and PlayerUnknown had a bit of a spat.

The game’s official Twitter announced that Fortnite has crossed the 7 million player count, and that duos mode has finally been activated for Battle Royale. Additionally, supply drops are also live now, randomly dropping the best loot in game from the sky.

Original Story, September 26: Following what will be this year’s trend, Fortnite’s free-for-all battle royale game mode is getting a little upgrade today. Along with various bug fixes, new weapons, and other features, patch 1.6.3 adds squads, letting you team up with friends and randoms alike for more tactical takedowns.

It performs as you might expect, letting you fill your team with random players matched with you from the internet, or people from your friends list. You revive team-mates when they’re down, can see their health and shields on the UI, and co-op building of defensive structures is encouraged.

Duos is also part of the patch, but won’t be enabled until there are enough players to support the three different matchmaking modes. Given that Fortnite’s battle royale mode isfree from today, hopefully that won’t be long. Presumably, that’s timed with the patch coming out today, too.

Also in the patch are supply drops, which can contain particularly powerful weapons, and three new guns. They are:

There are also new cosmetic items and a big ol’ balance rework, as detailed in the full patch notes.