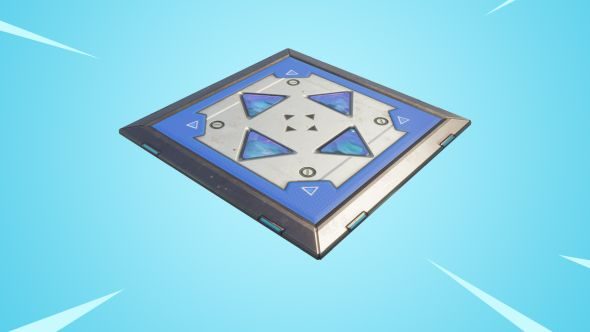 Fortnite’s v4.3 update has arrived, adding the new Bouncer trap to Battle Royale. The trap, which you can find in chests, supply drops, supply llamas, and floor loot, can be placed on floors and walls to provide a directional boost without causing fall damage – a little like the stacks of tyres you find placed around Fortnite’s map.

The bouncer gives you some extra airtime in Fortnite. Replacing the game’s older jump pads, these items will land in Battle Royale tomorrow with the 4.3 content update. You can expect that update to hit at 5:00 PDT / 8:00 EDT / 13:00 BST, with no downtime to interrupt your quest for victory royale.

A new one’s announced seemingly every day – keep up with the best battle royale games.

This one follows the usual Fortnite item cycle of datamines, an update on the in-game news feed, and a tweet confirming the time of a new update. The in-game description says “place this pad for a big bounce boost – no fall damage,” while the update tweet promises that you’ll “bounce to impressive heights.”

According to datamines from TwoEpicBuddies onTwitter, (as well as the full v4.3 patch notes) the bouncer can be placed on walls, and the floor, and will give shopping cart riders a boost when they hit it. Previous jump pads have come in different varieties that offered vertical or horizontal leaping options, though it’s not yet clear whether this version will provide one or both of those previous functionalities.

There’s plenty more in the near future for Fortnite, with the Playground mode coming some time in the near future, and loads of focus on competitive play as Epic prepares for its big esports push. Just a few more updates to keep Fortnite on its path of global domination.