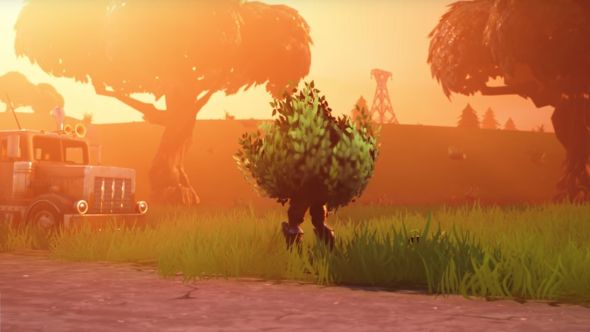 I’ve been sat on this hill overlooking Tilted Towers for about ten minutes now. Multiple zones have closed in but by sheer luck I’ve stayed safe in the middle of all of them. My partner is long dead, meaning I have no backup, but there are only four other players left in the game at this point. And they have no idea that I am even here.

It’s not common to be able to stay safe in Fortnite while out in the open, devoid of any cover to protect you, especially not when overlooking the island’s most infamous kill zone. I, however, am disguised as a bush, and my minutes of inactivity mean that no-one even noticed me as I sat watching the number of remaining players tick down into single figures.

Bush-camping in Fornite takes two forms. The first will be familiar to players of other battle royale games, and involves simply squatting in a bush, hoping to, err, ambushunsuspecting enemies. It’s not a perfect strategy, but the reality is that most players are looking for people running around the map, not squatting in partial camouflage without any protection. As such, while you watch the leaves gently sway, it’s pretty common to have players run just metres in front of you, unaware of your existence. I’m not ashamed to say I’ve won several gunfights by making use of shrubbery to ensure I got the drop on my opponents.

The second and far superior form of bush-camping is a little more advanced. Fortnite item chests occasionally drop the Bush, a wearable disguise that you can don in order to hide in plain sight as part of Fortnite’s vegetation. You’re free to run around at will while wearing the Bush and only have to cease your motion to blend in with your environment. If you take damage, however, your bush disguise will dissolve immediately, meaning you have to be careful of falling great heights, the deadly storm, and giving yourself away to other players. What I amashamed to reveal is that I have been regularly sussed out by players watching my bush shuffle suspiciously across the map. 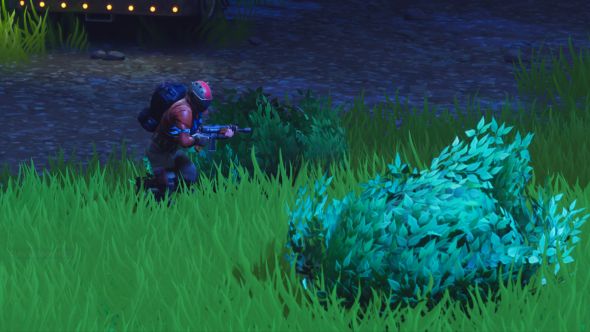 While my love of bush-camping might not be the most successful strategy it is a huge amount of fun. Watching players sprint cluelessly past you before firing pot-shots into their back is never not rewarding. Even better: add a silenced weapon to the equation to send genuine terror coursing through your targets as their health mysteriously drops. Also, as a fan of stealth games like Dishonored, sneaking across open fields praying another player doesn’t spy me appeals to my love of lying in wait for an unsuspecting guard, hoping they don’t turn around before I pounce on them.

Having moved from PUBG to Fortnite, I found the latter’s limited tactical focus frustrating. PUBG feels like a game where your location can be just as important as your ability in helping you come out on top. Fortnite, on the other hand, always felt more skill-based, a game where you can make your own luck by mastering the game’s building mechanics. But embracing the life of a bush camper changed that view entirely. Wearing the Bush changes where you can be, when you can move, and how you can react to other players. Even turning on the spot is a risk, as Fortnite’s actual plant life doesn’t swivel to watch players run past, which adds a tangible tension to your handling of the mouse and keyboard. Putting on a disguise changes the game from a fast-paced shooter to a stealth game with a greater focus on positioning and patience than gunplay.

I didn’t win the game outlined at the start of this article. Despite a brilliantly placed grenade in the middle of someone else’s firefight taking me into the final two, I was undone by a player who wasted no time dispatching the suspicious bundle of leaves creeping into the middle of the zone. I guess I should adopt the adage that to play the bush I need to becomethe bush – if you need me, I’ll be outside in the park, jumping out on unsuspecting dog walkers from the greenery.