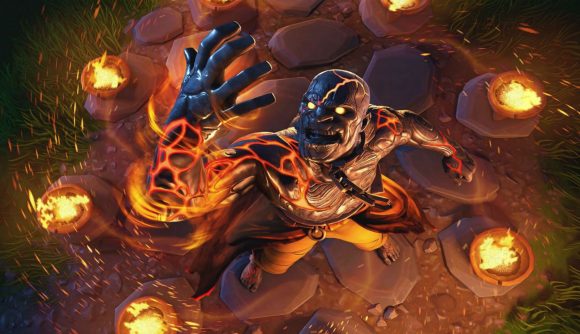 Fortnite Season 7 is drawing to a close, so it’s time for Epic to start setting up yet another apocalyptic event. We’ve had meteors, a villainous rocket launch, and an uncaring purple cube, but now it’s time for something a little more down to earth.

Earthquakes have been rocking the battle royale’s island for a few weeks, but now the cracks are really starting to show. As the tremors get more intense, fissures are starting to appear in real-time throughout the game, some of them spreading a significant distance across the map.

So far, three cracks have appeared across the map, and more are due at roughly 12 hour intervals over the rest of the season, culminating around the Fortnite Season 8 release date. Sadly, we don’t yet know where the new fissures will show up, I’d watch where you step for the next couple of weeks. Knowing Epic, tremors are likely to increase in intensity until then, with a major final quake likely to occur on February 27.

From a lore perspective (yes, Fortnite has lore), the earthquakes are likely to be result of The Prisoner, who doesn’t seem to plan on being locked up for much longer. What’ll happen when he frees himself is anybody’s guess, but it’s looking like it’s going to be pretty destructive.

Related: The Fortnite Season 8 Battle Pass will be free

You can check out a recent fissure formation – this one from near Tomato Temple – in the tweet below:

I’m imagining that we’ll see the map split into chunks as more fissures appear, but Epic is unlikely to do anything too destructive to its map. Current fan theories are suggesting that Wailing Woods might be in line for some major changes, and that that unfortunate building in Tilted Towers is once again scheduled for an impromptu demolition, but we’ll find out for sure over the next two weeks.