Fortnite fans might be aware of an in-game phenomenon known as “ghost-peeking.” Essentially, it was a visual bug that allows your opponents to take shots at you without revealing their soft and vulnerable bodies to a hail of your incredibly accurate bullets. Epic has now fixed it, but in doing so, it’s created another equally disruptive issue.

Ghost peeking came about because Fortnite’s animation system makes sure your character’s feet are correctly positioned while crouching on a slope. Unfortunately, however, it also changed your character’s mesh, allowing you to remain safe behind cover while miraculously maintaining the ability to shoot over it.

An image posted on Reddit (which you can see in the image at the top of this article) shows what actually happened – the green line on that picture shows your bullet trace, which is about a foot higher up than the barrel of the gun. That means that you can shoot ‘through’ cover, even though your gun seems to be pointing directly at it. It was an unfortunate predicament, but Epic says it’s been able to rectify it.

Sadly, in doing so they’ve created a brand-new issue. As pointed out in a separate Reddit thread, the solution makes it more difficult for players to aim down sites. A screenshot in that post shows the Cuddle Team Leader skin using a Burst Assault Rifle. That should be fine, but for the fact that the skin’s head now takes up almost the entire left-hand side of the screen – including the area directly between the camera and the aiming reticule. 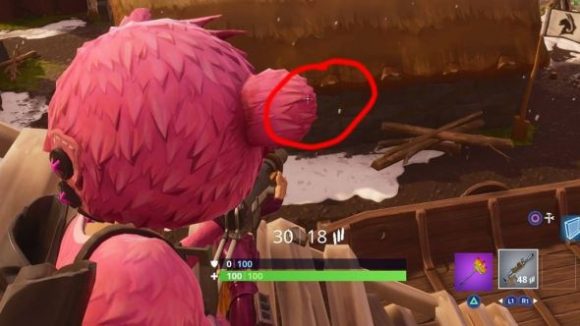 Different weapons and different skins struggle with this issue to a different degree. The Hunting Rifle is worst affected, but other weapons are also affected. When it comes to skins, the bigger the head, the worse the issue – perhaps make sure to steer clear of the Fortnite skins boasting enormous mascot heads for the moment. Hopefully Epic will sort out the new issue relatively quickly, but it does seem to be something of an ongoing issue.