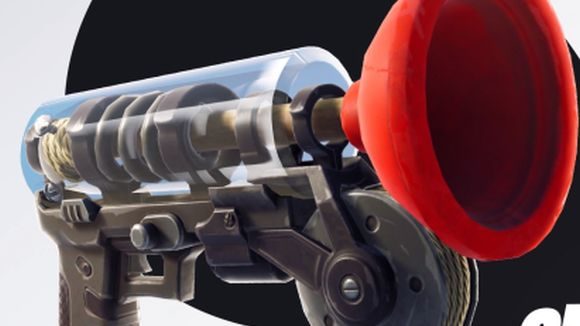 Ever since the Grabber was introduced to Fortnite back in September, I’ve felt that its purpose was relatively easy to comprehend. You point it at a surface, it sticks to it, and then pulls you towards it at high speeds. That was all it did, and as far as I was concerned, that was all it ever needed to do.

It turns out, however, that the Grabber may actually have a secondary use, turning it from a utility item into a deadly offensive weapon. In a video uploaded over the weekend (which you can see below), Reddit user Nessive learned that the item can be used to push your opponents away, with some destructive effects.

As Nessive’s enemy glides down on top of them, the balletic combination of panicked jumping and shotgun blasts that is all too common in Fortnite begins. Nessive misses their first shot, and then, for some reason, switches to their Grabber. They take a hit from the opposing player, but just in time, they fire the grappling hook, which hits the opponent square in the midriff, catapulting them away across Paradise Palms, where they fall to their death.

It’s frankly a bizarre exchange. Partly, that’s because I have no idea why Nessive chose to use their escape mechanism in the middle of a close-quarters gunfight, but I’ll have to assume that it was an accident. Otherwise, I was simply unaware that the Grabber could be used in this comical but deadly manner.

Apparently this is possible from r/FortNiteBR

I’m not entirely sure whether this use of the item was intentional or not. I’ve used the Grabber plenty of times, but never seen an interaction like this. That said, I’ve also never used it directly against an opponent from such close range, and plenty of people in the Reddit comments don’t seem to have seen it before either, so I’m willing to bet it’s just a little known secret, rather than a bug. We’ll just have to wait and see what Epic do next.

If you fancy trying to recreate this for yourself, you might want to head to the game’s creative mode. And to make the most of that, check out our list of the best Fortnite Creative Codes, featuring everything from new named locations to Counter-Strike tributes.