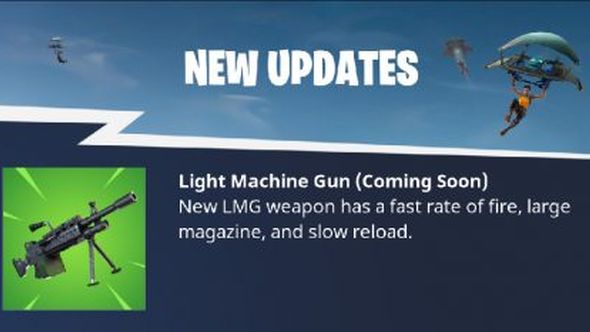 The sun rises, the Earth moves slightly onwards in its orbit, and Epic announce another new weapon for Fortnite. Light Machine Guns are the latest addition heading to Battle Royale.

Get an early look at the Fortnite week 9 challenges.

The weapon appeared in the game’s ‘Coming Soon’ section. Its description reads that the “new LMG weapon has a fast rate of fire, large magazine, and slow reload.” That probably makes the LMG relatively similar to Fortnite’s Minigun in the way it works, but without the time it takes the latter to spin up.

Storm Shield One have datamined the new weapon, and state that it’ll be found in Rare and Epic (Blue and Purple) variants, dealing either 25 or 26 damage per hit depending on which variant you have. It’ll have a 100-bullet magazine, but it’ll take nearly five seconds to reload, which means you’ll have to commit to its prolonged use, and it might not be the best thing for fast-paced fights.

The LMG is the sixth weapon to be added to Fortnite Battle Royale in the last two months, after the Handcannon, Hunting Rifle, Remote Explosive, Heavy Shotgun, and Guided Missile. On top of that, Epic also added the new instant-base-building Port-a-Fort in last week’s update. There’s no release date for the LMG at this point, but when they show off a new weapon, it usually makes its way to the game in the next patch, so expect to see the new weapon arrive at the end of this week.