Rather than a separate set of free Fortnite challenges and tasks just for those that stump up the V-Bucks for the battle pass, there will be three free challenges each week and four for battle pass owners. There are still three hard challenges for 10 battle stars, but those without a battle pass can have a crack at one and two are restricted to players with the premium pass. As ever, the not-so-hard objectives give you five battle stars and you only need to complete four to get the reward item – which this week is 5000 season XP.

For everything else you need to know, here’s the full lowdown on Fortnite season 5.

Whether you’re the proud owner of a new battle pass or you’re playing the game for free, we’re here to help you complete the Fortnite week 1 challenges. Here’s what they are.

A nice and simple one to kick off the first free Fortnite challenges of this season. Just track down an SMG and start laying into your opponent. You don’t even need to kill them, either: the damage you deal stacks. So, if you cause enough pain with a submachine gun, this challenge is in the bag.

Tracking down these colourful blighters can be a challenge: randomly dotted across the world, finding a Supply Llama might take some time. However, if you spot one, loot them to gain special gear and complete this Fortnite week 1 challenge. But be warned, they take a while to search, so make sure nobody is around, first.

Considering that grenades are the weapons least often used by Fortnite players, this could be an awkward one. But, since most people will be converging on the new Paradise Palms and Lazy Links locations – and Retail Row, the elimination spot for this week – come armed with throwable explosives to maximise your chance to gain the three kills you need to finish this task.

The first of your battle pass-exclusive challenges is also a familiar one. Head to the western coast of Epic’s treacherous isle and open seven of the glowing beauties to get five more battle stars. 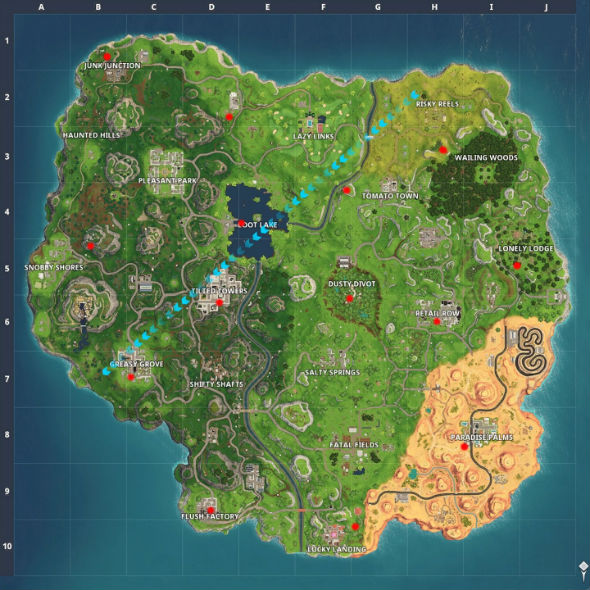 The collectible item this week are floating lightning bolts scattered across the island. But, while you only need to find seven, we’ve found all 14 because and revealed their locations on the map above. Note: since the bolts of electricity float, you’re going to need some materials spare to build up to them. 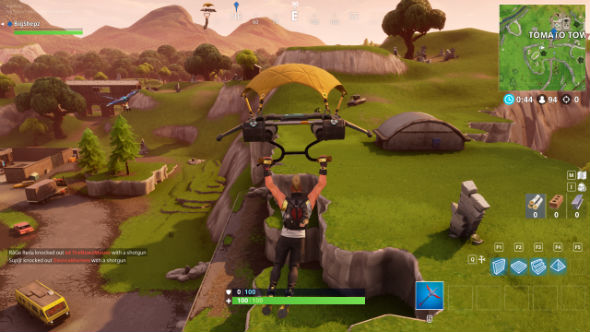 The Risky Reels treasure map takes you just south-west of Tomato Town. Jump down to the middle of the ledge just left of my character in the image above and the battle star should appear.

Forget the new and shiny locations that have made their way into the Fortnite season 5 map, the trusty shopping centre of Retail Row is the spot in which you need to get three kills. Try landing on the large building to the south of the area, it has three possible chest spawn chances to help you get the murderous gear you need.