Fortnite’s latest weapon is set to be the Shockwave Grenade, likely coming as part of the game’s next update. It’s shown up in a handful of recent datamines, and just made an official debut on the in-game news feed with a “coming soon” label. Typically, that means we’re only a day or two away from a new item’s launch, so expect to be playing with the new grenade soon.

The item description reads “Send yourself, allies, or enemies fling like a human cannonball! Grants immunity to fall damage.”

That sounds pretty similar to the existing Impulse Grenades, except for the important caveat of “immunity to fall damage.” Impulse Grenades could be used to kill enemies by knocking them from ledges or shooting them straight up depending on the angle, but it sounds like that won’t be possible here.

Instead, the Shockwave Grenades look to be a sort of mobility tool, letting you essentially rocket jump to new locations or shake up the battlefield when things aren’t going in your favour. At least, that’s how it sounds based on the description – we won’t know for sure what uses it has until it’s in the game, but another mobility tool would certainly fit with many other recent additions to the game.

Datamines uncovered the Shockwave Grenade last week, and it’s not the only new weapon scheduled to hit Fortnite game based on similar discoveries – you can also expect a Quad Rocket Launcher and Flamethrower, likely in the near future. 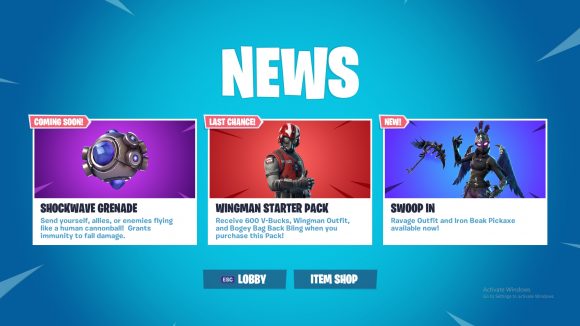 Be sure to check out our Fortnite week 7 challenges guide if you need some additional help bringing those last few goals home.