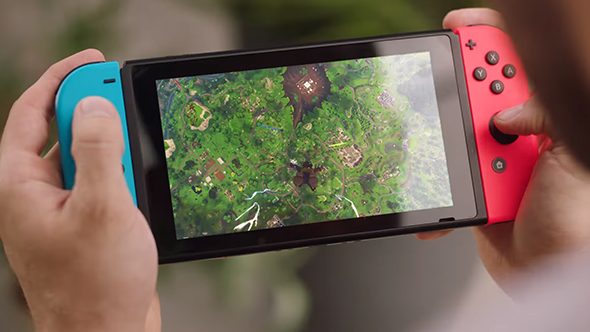 Fortnite for Nintendo Switch was announced on today’s Nintendo Direct presentation. It will feature cross-play with players on PC, Xbox One, and mobile devices – if you’re keeping track, that means the PlayStation 4 is the only platform left out of the wider cross-play pool (Battle Royale only, though – sorry, STW fans).

Epic’s Nick Chester confirmed the news following this version’s announcement during the Nintendo presentation. The Switch port went live on the eShop following the end of the presentation in North America, and is set for worldwide release at 14:00 PDT / 17:00 EDT / 22:00 BST today.

Everything’s better with friends, so why not take a look at all the best multiplayer games on PC?

Like other versions of Fortnite, the Switch port requires you to link up an Epic Games account in order to make use of cross-play. You can share progress between versions, but it seems V-Buck purchases will not carry over across platforms.

Notably, you can only link an existing Epic account to Fortnite Switch if that account had been tied to PC, Xbox, or mobile before. More succinctly, that means if you had your Epic account linked to a PSN profile, you’ll have to go through the process of unlinking that account – often including progression resets – in order to connect with the Switch version.

Here’s a taste of what the new Switch edition looks like in action:

Sony has notably been hesitant to allow cross-play with other console platforms, though games like Fortnite do allow PC and PS4 players to meet – just not against Xbox and Switch gamers. So Fortnite joins the likes of Rocket League and Minecraft in offering the biggest cross-play choices outside the PlayStation platform.

Xbox One, PC, Mac, and mobile.

But hey, if you’re about to enjoy Fortnite on Switch, why not check out our week 7 challenges guide? The pool of players is only getting bigger, so you’ll have plenty of competition out there.