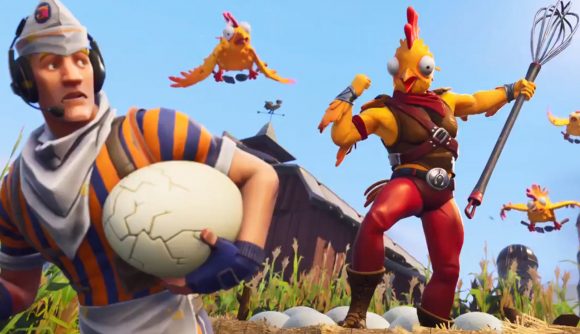 Earlier this year, an eight-year-old boy named Connor came up with a Fortnite skin. That skin, the Tender Defender, is now an actual cosmetic in Epic’s battle royale. Connor’s dad went so far as to record his son’s reaction to the skin’s debut in the item shop, and it’s just as delightful as you might’ve hoped.

But first, some backstory. In September, Reddit user tfoust10 submitted a post to the Fortnite subreddit on behalf of his son, Connor. It was a letter that read “Dear Fortnite. Please add a skin in Fortnite called the Chicken Trooper.” It also included a drawing of that skin with the label “I am not good at drawing.”

That post quickly drew over 40,000 upvotes on Reddit, and another user named Etsyturtle2 whipped up a proper artist’s rendition of the concept that Epic officially picked up. Epic asked permission and provided enough “real-life V-Bucks” to “get plenty of new art supplies.” The design in-game pretty much matches the original, just with the named switched to Tender Defender.

Connor himself was out of the loop on all this until Thanksgiving, when the the skin actually went live in the Fortnite item shop. You can watch his reaction to the reveal below.

More surprises are on the way as the Fortnite season 7 release date comes ever closer. They might not all be as heartwarming as the unlikely debut of Tender Defender, but there should still be some fun stuff.