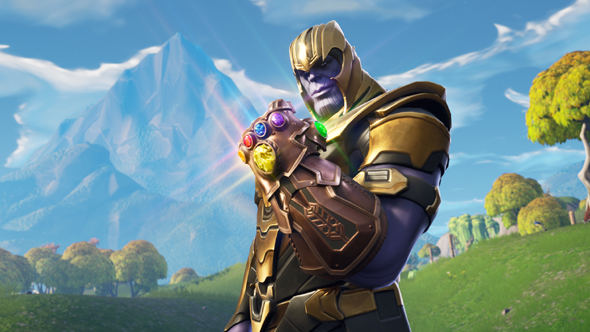 It’s your last chance to wield the Infinity Gauntlet, as Epic have just confirmed that the Fortnite-meets-Avengers crossover is coming to an end tomorrow. If you’ve yet to enjoy the infinite (though regularly nerfed) power of Thanos, you’d better get on it quick. The limited time 50v50 mode is still live, so you’ve got some options if you’re bored of the standard set of modes.

Get into the best battle royale games.

Sadly, it seems there hasn’t been enough time for Josh Brolin to come to terms with dancing Thanos. Our question now is what’s next? Fortnite x Star Wars? Fornite x Jurassic World? Fortnite x PUBG? Please, regale us with your favourite “most ambitious crossovers in history.”

Update, May 11: Thanos receives some further tweaks in Fortnite’s Avengers: Infinity War crossover event, including a massive decrease in his health.

The Mad Titan is meant to be the most powerful guy around, and that’s the way he’s been portrayed in Fortnite – but the developers felt that not enough players were getting to experience his majesty, so they’ve nerfed him again.

The previous change to Thanos (see May 8 update below) decreased his laser damage and increased his health. Now Epic have reversed that decision, so Thanos wields more destructive power, but players can knock him out more easily.

His laser beam damage against players has been raised from 12 to 20 (it was 15 before the last update) and punch damage has been increased from 80 to 100. His health, which was raised from 700 to 800 previously, has now been drastically cut to 500.

There’s also been a change to when the Gauntlet initially spawns, which has now gone from bus ride plus 30-45s to bus ride plus 120-135s – presumably to give players a chance to collect more gear before they make the mad dash on its drop point.

The developers say they want to “allow more folks to truly experience the power of Thanos, while also making you feel powerful when wielding the gauntlet”. They revealed the changes onReddit, where once again reactions have been mixed to say the least.

There may well be further updates to Thanos as Epic continue to tweak his awesome powers, so this nerf might be snapped out of existence too. Stay tuned.

Update, May 8: Thanos gets some adjustments early into the new Fortnite meets Avengers mashup.

Whether you’ve seen the new Avengers movie, read some comics, or simply existed on the internet in these past few weeks, you probably know that Thanos is a pretty powerful dude. Even more so once he’s got the Infinity Gauntlet. Cool as the Fortnite crossover may be, turns out that he may be a hair overpowered for a competitive setting, so Epic have already nerfed him.

Thanos will have his shield cap decreased from 300 to 200 and laser damage against other players will decrease from 15 to 12. His health, however, gets a slight boost from 700 to 800.

Judging by the reaction to the hotfix announcement on Reddit, players have managed to develop some strong feelings about a mode that’s only a handful of hours old and will soon be gone. Presumably, Thanos will soon snap his fingers and reshape reality back into something that favours him most of all. That’s how this works, right?

Original story, May 8: The Avengers: Infinity War event, which brings the movie’s antagonist Thanos to the game, is now live in Fortnite – and Epic have revealed all of his abilities along with a new trailer.

The developers detail the event in the game’s Update 4.1 patch notes. Early in a match a meteor, which contains the Infinity Gauntlet, crashes somewhere in the safe zone . Any player who picks it up becomes Thanos, gaining 300 shields, 700 health, and immunity to fall damage. He also has the following abilities:

On the downside, Thanos can’t build, use launch pads, or equip weapons. Any player who becomes Thanos also appears on the compass for everyone to see, and if that player gets eliminated someone else can pick up the gauntlet and take their place as the mad Titan. If no one collects the gauntlet after a certain time, it’ll disappear and drop somewhere else on the map.

The Avengers: Infinity War event began with the film’s directors the Russo brothers, who are Fortnite fans, calling Epic creative director Donald Mustard about a crossover. However don’t expect to see any Avengers costumes in the store, since the developers have ruled that out.