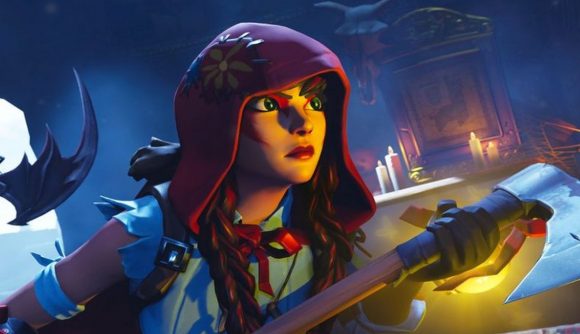 Beneath the chaos of its colourful battle royale, you may be surprised to learn that there are myriad story threads interwoven within Fortnite. One of those threads is the ongoing battle between the fast food joints that inhabit its world – the Tomato Town Pizzeria, and the Durrr Burger burger place. That war has recently taken a step up with the arrival of the game’s latest limited-time mode, Food Fight.

Food Fight is a 12v12 team-based mode, in which one team fights on behalf of Tomato Town, and the other on behalf of Durrr Burger. Players are tasked with being the first to destroy the opposing team’s mascot, while protecting their own. And it seems the Fortnite Fast Food War is attracting some outside attention.

That attention stems from American burger chain Wendy’s. Now, you might think that a restaurant famed for its burgers would back Durrr Burger in this kind of fight, but you’d be wrong. Wendy’s has come out swinging for Team Pizza, blasting Team Burger as a result of its culinary practices.

For some context, Wendy’s states that it always uses fresh beef, rather than frozen, in all of its burgers. That’s a practice apparently not undertaken by Durrr Burger – the Wendy’s social media account has noticed a whole bunch of freezers in the back of the restaurant. So the burger joint took to Twitter, stating, “We never joined Team Burger because Durrr Burger is full of freezers and we don’t clown around with the frozen beef. So now we’ll officially declare Team Pizza and start the real fight, the war on frozen beef.”

We never joined #TeamBurger because Durrr Burger is full of freezers and we don’t clown around with the frozen beef.

So now we’ll officially declare #TeamPizza and start the real fight, the war on frozen beef.

As it turns out, that wasn’t just a war of words, as Wendy’s then went live on Twitch to make good on its threat. A representative of the chain streamed the game, allowing players to watch in real-time as a character dressed in the Red Riding Hood-themed ‘Fable’ skin dropped into Greasy Grove. From there, they systematically destroyed the Durrr Burger store, starting with the freezers and then levelling the rest of the restaurant.

The Fortnite fast food war might be vicious, but it certainly won’t be coming to an end any time soon. In fact, a new challenger has recently entered the fray in the form of Tender Defender. The chicken-themed mascot was based on an idea from an eight-year-old Fortnite fan, and was recently introduced as an in-game cosmetic set.