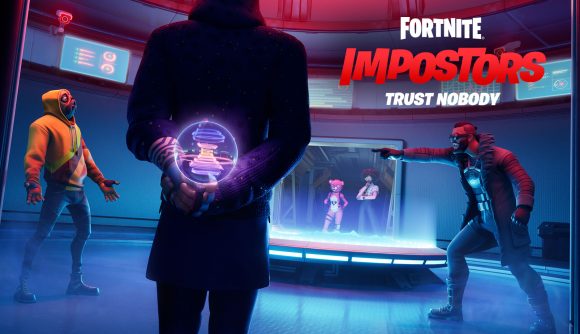 Fortnite‘s Impostors mode takes more than a little inspiration from the indie megahit Among Us – you probably could have guessed that, but today Epic officially acknowledged that the game mode was “inspired by Among Us from Innersloth”. It seems that’s just the start, though, as the two studios are now teasing a proper crossover between the games.

There are no details on what that crossover will look like, but Epic and Innersloth had a cloyingly cute Twitter exchange today suggesting that the two studios would be “working on something fun together”. This exchange comes just after the 18.20 patch notes finally acknowledged that Impostors is a “game mode inspired by Among Us from Innersloth”.

Epic had previously faced criticism for lifting Among Us’s mechanics for its Impostors mode, including from the Innersloth devs themselves. Community director Victoria Tran said in August that “it would’ve been really, really cool to collab”. Now, it seems that collaboration is finally going to happen.

In today’s patch, Fortnite’s Impostors mode got a role bias option, which lets you select a preference on whether or not you’ll be an impostor or agent. Matchmaking will guide you toward your preferred role, though you’re not guaranteed to get it every single match. There’s also a new Impostors playlist featuring open voice chat, in case you want to accuse internet strangers of murder and deceit.

Big fans! We never got to talk about how you inspired us. What do you think about working on something fun together sometime?

Check out our guide to the Fortnite Chapter 2 Season 8 punchcard quests if you’re looking for some help with the current content in battle royale.