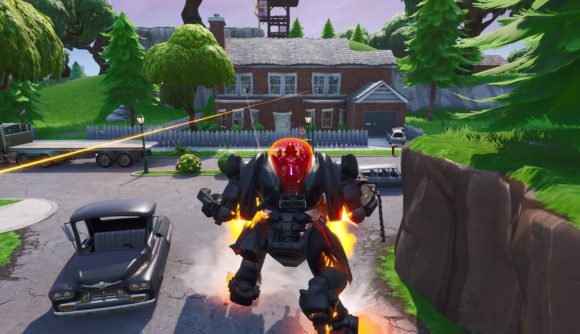 Fortnite’s mechs have been a controversial addition to the game, just as many previous vehicles and powerful items have been. While the BRUTE got a slight nerf recently, it’s still powerful enough to give casual players who chance upon it an edge against against even the pros – and Epic says that’s absolutely by design.

“The mission of Fortnite is to bring players of all skill levels together to have a fun experience where anyone can win,” Epic says in a breakdown of why the BRUTE is in the game. “For example – everyone having a shot at that first elimination or Victory Royale moment and the satisfying feeling that comes with it.”

To that end, the BRUTE has been pretty successful. “The B.R.U.T.E. was added at the start of Season X with this mission in mind. Since then, we have seen players who had previously struggled with getting eliminations acquiring more, while the number of eliminations earned by more experienced players remained steady.”

There are also a few charts breaking down how many BRUTE eliminations are happening in each game type. The mech averages around four kills per game in solos, and around six in duos, squads, and Team Rumble. In Arena Modes, the average is around one kill per game. In all cases, that’s a relatively small percentage of total kills.

Either way, Epic’s assertion that the mechs upset the game’s skill curve by design hasn’t been received in the kindest terms by a community that’s been campaigning to #RemoveTheMech. The Reddit thread around the announcement has been unkind, even by social media standards.

While Fortnite’s large adolescent audience might appreciate an uber power-up, the game’s got a competitive scene too, and pros have taken umbrage with powerful items in the past – like when the Infinity Blade got involved with the Winter Royale finals last year. The BRUTE’s most substantial nerfs have come in competitive modes, but it’s still there.

Still, Epic says “we regularly have and will continue to release content that shakes up gameplay in Fortnite in unexpected ways.”