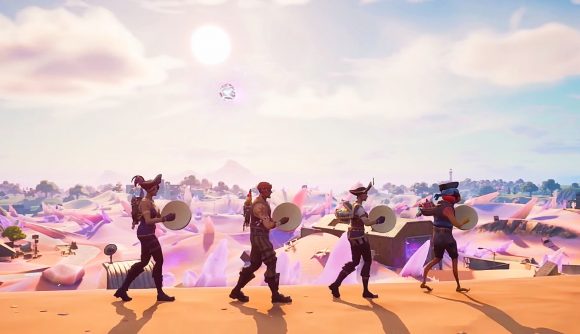 Like an onrushing katamari ball, Fortnite continues to envelop pop culture. Over the past few weeks, we’ve seen oodles of crossovers that have seen characters from Alien, Terminator, Predator, and Street Fighter get Fortnite skins. Now, though, we’ve got an emote that’s a play on the old sea shanty called the Wellerman that’s been taking TikTok by storm.

The way it works is quite amusing. If you pick up and use the Shanty for the Squad emote, your character will thump on a drum and sing a Fortnite-pointed parody of the Wellerman. Every time someone in your squad joins in, they’ll add an additional layer of vocals. If you fancy picking it up for yourself, it’s on the Fortnite store for 500 V-Bucks.

If you’d like to see the new Fortnite emote for yourself, you can find it below:

🎶One day, when the squaddin' is done,
We'll take our dub and go 🎶

Gather round the Item Shop and grab the Shanty for a Squad Emote inspired by @NathanEvanss and #shantyTok! pic.twitter.com/9UCAh531cw

Funnily enough, this isn’t the first time we’ve seen the Wellerman pop up in the gaming space. A Bristol-based sea shanty group called the Longest Johns brought it to lots of people’s attention by singing it to people while playing Sea of Thieves. The more you know.

Anyway, the Fortnite Chapter 2 Season 6 release date isn’t far away now, and you can click that link if you want to find out everything we know about it and all that good stuff.