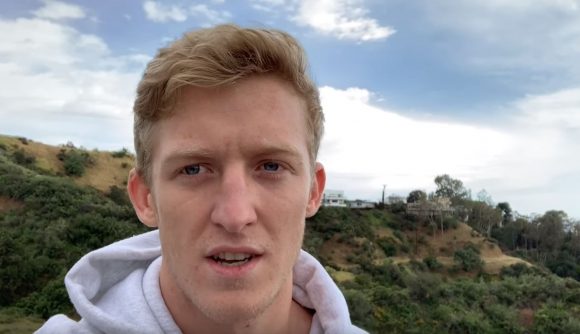 It looks like there are now two Tfues – sort of. Fortnite streamer and former Faze Clan member Turner ‘Tfue’ Tenney (Who is Tfue?) has got a lookalike – who has just started streaming Fortnite on his own Twitch channel, using the account name ‘2_fue’.

User Draskant recently posted a picture on Reddit (via Dotesports) which appears to be of himself, alongside Tfue illustrating their similarity in appearance, with the words “No kids, I’m not Tfue: After being stopped for a photo for the 1000th time I feel obligated to tell the world.” Given the picture he’s posted, it’s probably unsurprising that Tfue’s fans might have mistaken him for the Fortnite pro – check it out for yourself below.

Since then 2_fue has come to the attention of his lookalike. According to Dotesports, Tfue has commented on the post in a stream and indicated that he’d beek keen to find his “twin” and do some content together. He’s also started following him on Twitter, with 2_fue’s Twitter page highlighting their similarity in his background image and bio, which says “The real not Tfue…”

Since setting up his Twitch account and starting to stream Fortnite earlier this month, 2_fue has gained some followers to his account, which at the time of writing sits at 569. One of the four streamers he’s following is, unsurprisingly, Tfue.

No kids, I’m not tfue: After being stopped for a photo for the 1000th time I feel obligated to tell the world from r/FortNiteBR

It looks like the new Fortnite streamer is planning on streaming pretty frequently too – on Twitter he’s posted a schedule for this week, and seems to have started playing Fortnite regularly on Twitch.

Whether a Tfue-2_fue collaboration will materialise in the future, we’ll just have to wait and see.