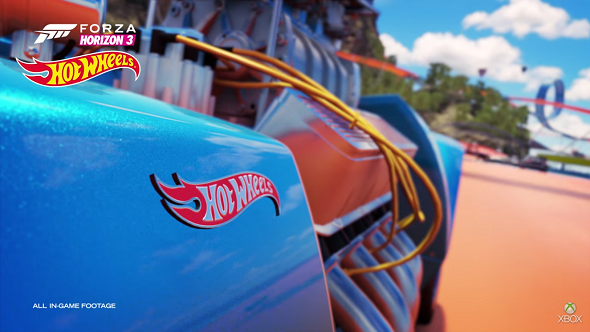 Fancy taking to the skies and snaking around fluorescent tracks, performing loop-de-loops and other death-defying stunts in Forza Horizon 3? You’re in luck, there’s a Hot Wheels-themed expansion on the way.

If you’re a petrolhead, check out our list of the best racing games.

Not only will there be an entirely new area – a chain of islands connected by twisting, plastic tracks – but the game is also getting ten new Hot Wheels-flavoured cars. As you can see in the trailer above, it looks amazing.

Forza Horizon 3 was always a fun game to throw cars around in, but this looks to take that fun factor to the next level, offering proper arcade racing thrills on impossible race tracks. Don’t pretend you’ve never wanted to throw a car through a ring of fire.

Outside of the cars, the bank turns, the half-pipes, and a mechanical T-rex, there’s a new feature coming in the form of Stunt Swap. This will let you rig up stunt runs from track parts so you can challenge your pals.

The expansion is releasing on May 9.