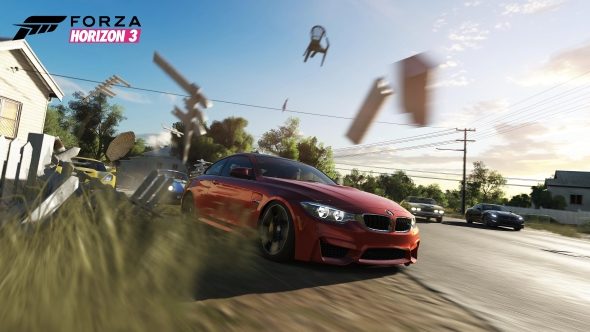 A Forza Horizon 3 patch has been causing some grief today, asking people to download the entire game again, and not even bothering to overwrite the existing files. It’s not only filling up hard drives, though – it’s also been wiping saves.

While you’re waiting for a solution, we have a list of the best racing games on PC.

Players all over the official Forza forums have been reporting the issue, with many saying their saves are now corrupt.

With the patch being the size of the entire game, there’s been some speculation that the developers accidentally released the development version of the game instead of the patch. There are even some screensfloating around the internet seemingly showing the debug version of the racer.

We’re aware of and investigating an issue where #ForzaHorizon3 on PC is prompting players to download a 53GB update.

There’s also been a statement given over on the game’s forums, telling people which version they should have active. “The incorrect PC version of FH3 has now been removed and replaced. PC players who have the FH3 version ending with .37.2 should immediately uninstall that version of the game, then re-install. The correct playable version should end in .35.2,” it says.

“PC players who completed the download of .37.2 and then started a new game save will have a corrupted saved game. Avoid creating a new saved game on .37.2, and only play on .35.2 to avoid this issue. As long as you have an existing save and have not created a new one on .37.2, your saved game will work correctly once the update is available.”