There are only two kinds of people: those who love material possessions, and the experience collectors. Who’s right?

That’s my prevailing thought after a week with Forza Horizon 5 (which you can buy here), the biggest and in many ways the finest in a series whose standards have never dropped below ‘really, really good.’ I’ve put on fire-retardant suits, driven up an active volcano, and released thermal vents. I’ve chased storms through the jungle and documented ancient temple ruins and statues. As cars para-dropped out of cargo planes I took them under control and literally hit the ground running – don’t spoil the moment, I know cars don’t run – along spectacular point-to-points. I’ve also already started grinding the 34-mile Goliath race for credits and XP. Do I want experiences, or do I want stuff?

I haven’t been out with the tape measure, but developer Playground Games says the Mexican open world map in Horizon 5 is 50% bigger than the UK in Horizon 4. The bad news for the local denizens is that gaming’s most preposterous festival is pitching up here, defiling the natural beauty of the landscape with a fleet of tents emitting loud drum and bass songs at all hours.

The Horizon festival itself was a concept you could simply choose not to engage with in prior games, but here the story missions, vignettes, and well-voiced NPCs win you over. Maybe it’s the margaritas talking, but it feels a tiny bit exciting to be both the superstar driver whose feats in previous festivals draw in crowds, and also part of the senior leadership team organising it. 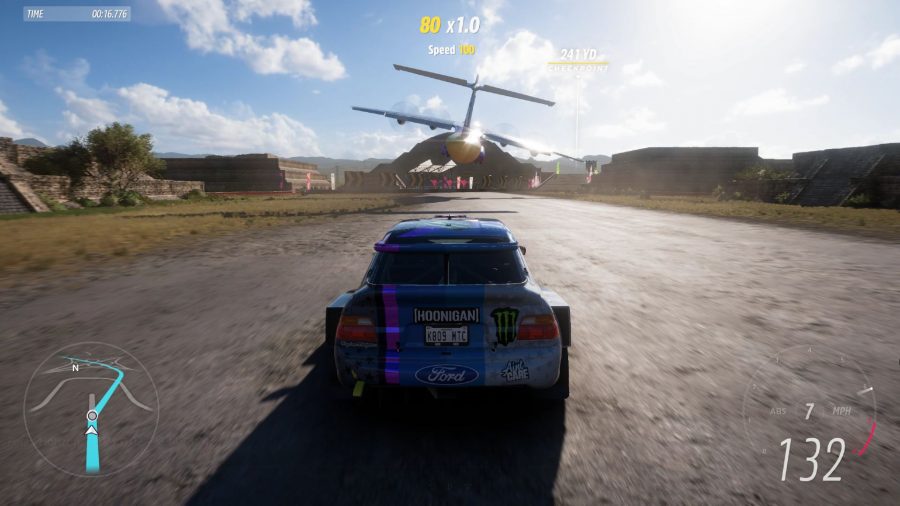 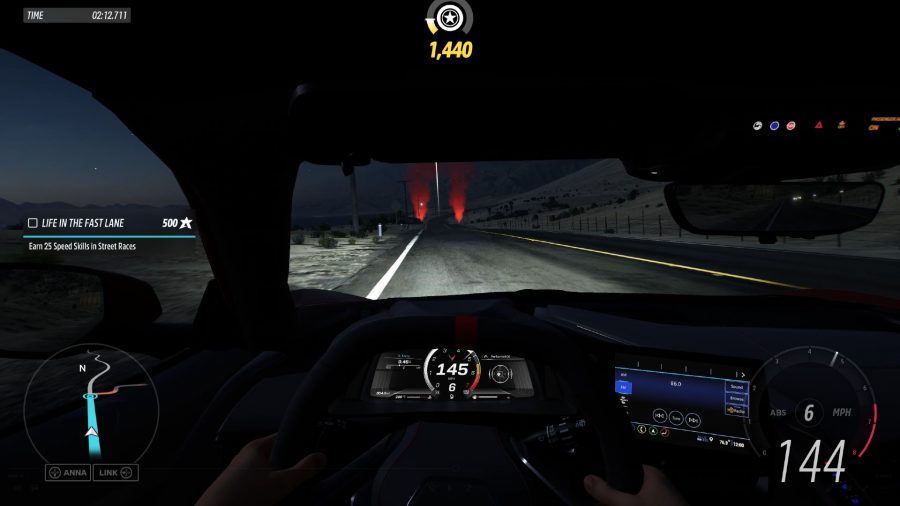 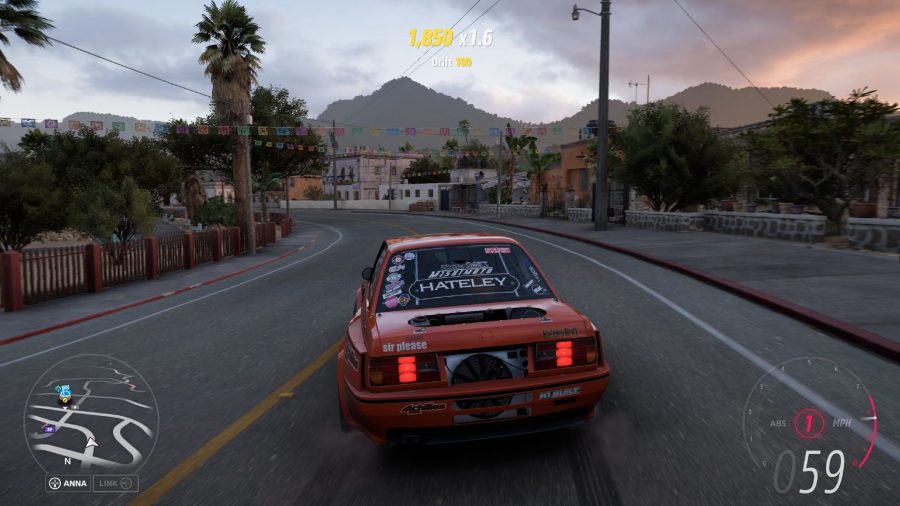 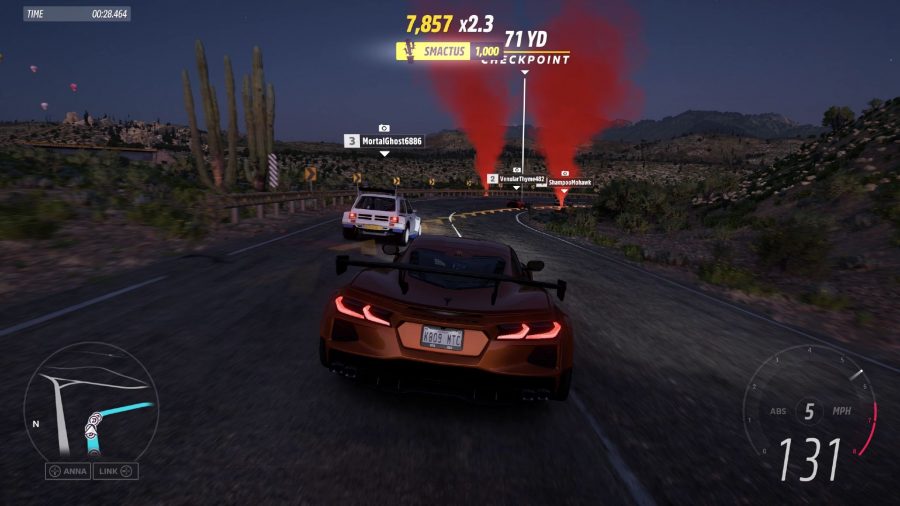 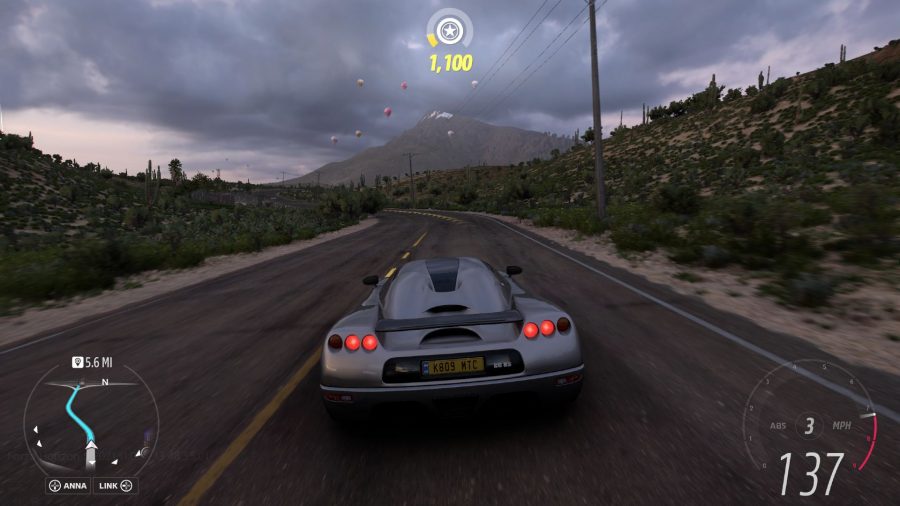 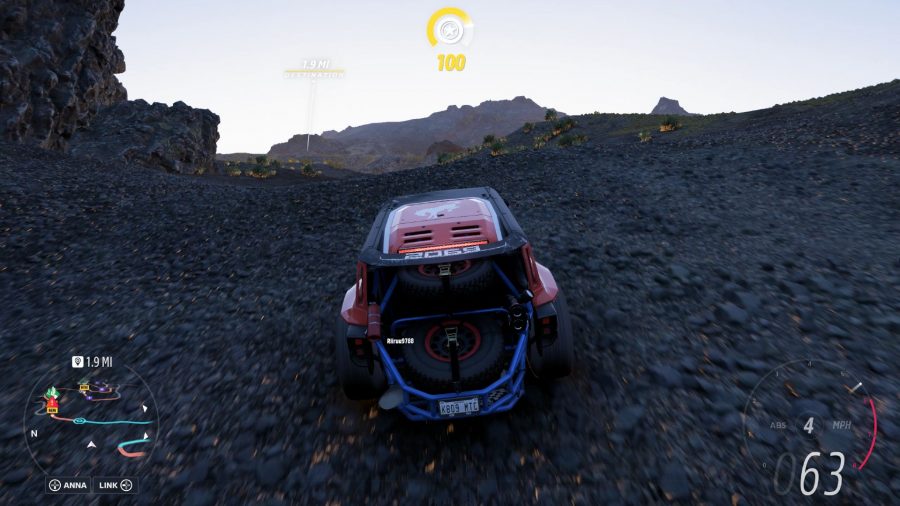 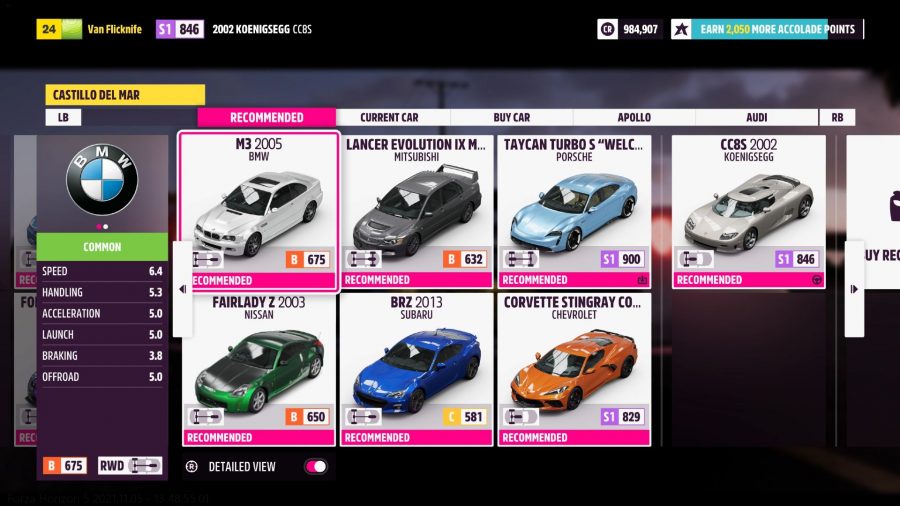 Work up your fame and you’ll expand Horizon to multiple sites across the map, choosing which discipline to expand next and sprinkling new events throughout the land, including expeditions. These new activities are the Horizon Showcase’s studious cousin, taking the premise of a tightly scripted adventure and slowing the pace down to something more meditative, inviting you to appreciate the view as you scour areas for objectives. 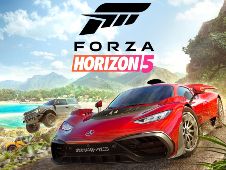 It half-works. Busting open thermal vents and collecting samples and reading feels like a visiting bit of game design from the days when Tony Hawk ruled the charts. But in placing you in some particularly dramatic scenery and forcing your foot off the gas, you get both a sense of place from Forza Horizon 5’s Mexican composite and a palate cleanser between races.

the biggest and finest entry in a series whose standards have never dropped below ‘really, really good’

The weather forecasters have a tough job out here. Storms give little notice before they whip up into ferocious cyclones, reducing visibility to a tense squint. They don’t seem to upset your vehicle’s handling too much, but they do throw another variable at you besides AI speed, track surface and seasonal effects. Tropical storms and their dustier variants on the sand plains are something to experience and enjoy in purely visual terms. In its new central American trim, Horizon 5 is capable of serving up rich and memorable experiences of the kind the genre just doesn’t do elsewhere. Playground’s series sits in a field of one, and this time out we catch it at its most cinematic. 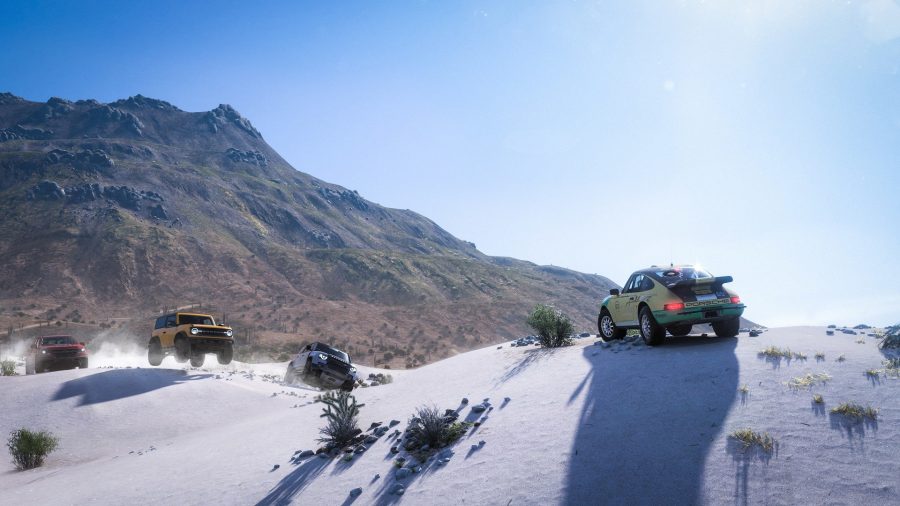 When the dust settles, though, not much else has changed. The formula that the last game established, and then refined with regular updates and content drops, is redeployed. Seasons change each week and new seasonal events appear when they do. Complete the tasks in each season’s festival playlist and you earn enough FP for exclusive cars, the acquisition and trading of which becomes, more or less, the point of the game after a certain point.

The Goliath race is a series staple by now. It's always the longest road race in a given Horizon, this one’s 34 miles flag to flag, which makes it the biggest one ever. Using the Horizon Blueprint event creator, you might even decide to extend it or turn it into several laps of the map - all for the grind.

What’s really clever about the activities within each festival playlist is how they get you thinking about your car collection. What starts out as an exercise in collecting models you like the look of becomes a quest to build a Swiss Army knife of perfectly tuned tools, each one highly specialised for the demands of its discipline. The Hoonigan RS200 danger sign monster. The Ferrari 599XX Evo speed trap slayer. The BMW X4 perfectly tuned to complete one speed zone, because the event dictates it.

What’s less clever about them are the multiplayer games. Playground games – the event type, not the studio – have long been an awkward fit among simpler, quicker to access races and objectives. However skilled your team may be at knocking into enemy hatchbacks until they’re all infected zombie-cars, there’s an upper limit to the enjoyment you can take from this type of thing and it lies somewhere between pulling the matted hair out of a plughole and the rest of Horizon 5’s racing. 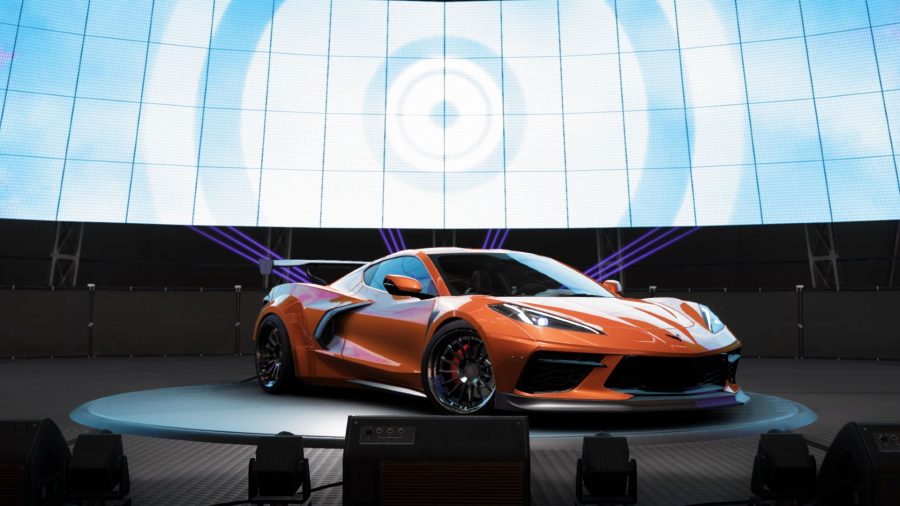 That resistance to dragging the chains forward in an area of historic weakness runs contrary to all the connectedness on show elsewhere. It’s fully playable in a four-strong co-op team, including the new expeditions. You can create and embark on user-created races with a few button presses. All very social. And yet ranked PvP racing remains hidden away in the menus obscured by an opaque name (Team Adventures), and the festival playlist still asks you to embark on the same awkward PvP games that have you waiting around in menus for as long as you’re actually playing. Easy enough to overlook in a game that represents the best in the genre in almost every other aspect.

It’s still incredible to look at. Not a transformative release that renders Horizon 4 ugly – or, indeed, very different at all. But head up to La Gran Caldera and there’s something about the jagged rocks on the mountainside that appears sharper. The gaseous vents seem lit with more sophistication. You have to squint to notice the advancements, but I really do think they’re there.

The cars don’t appear different in rendering terms to my eye, however. What were supernaturally detailed models in 2018 remain impressive specimens to pore over in 2021, but the maxed out PC version doesn’t see an obvious benefit to the advent of new-gen consoles when you look at its cars. It’s disappointing to see a largely unchanged car collection too, although I can’t stay mad at a racing game that gifts me the new Supra in its opening minutes. 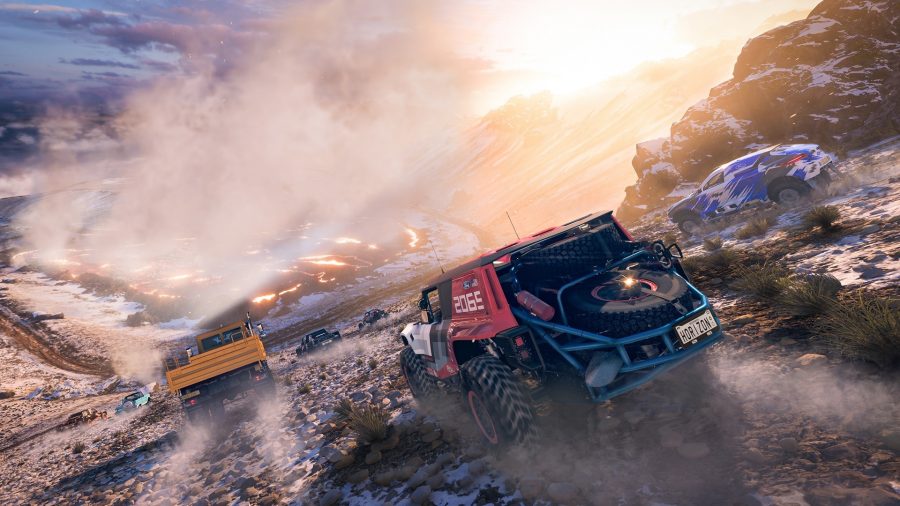 Which brings me back to my opening philosophical crisis. Having been spoiled by the distinct memories and cinematic spectacle Horizon 5’s lavished on me during my first few days with it, from impromptu Baja races to accidental midnight barn finds, I’m distinctly aware of how cautiously this game sticks to the established formula. But wow, what winning formula it is.

The carefully choreographed set pieces will dry up later on in the solo content, so your attention will turn to the hoovering up rare vehicles and accumulating vast riches at the auction house. And it’s during that prolonged endgame that Horizon 5’s regular updates and expansions need to find innovation in order to maintain the series’ own impossibly high standard.

Familiar, excellent, and polished to a degree that hardly seems possible. If you love taking vintage Porsches for joyrides through environments that’d have a poet bawling then you're going to be very happy here.