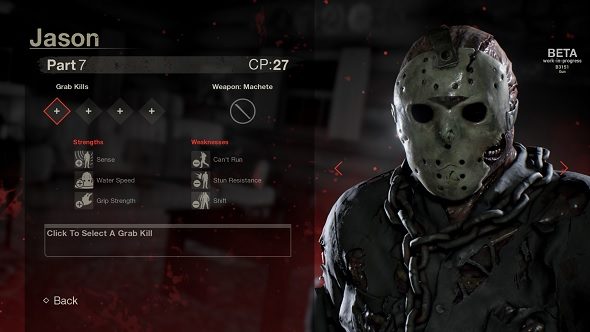 Some horror fans have been voicing their concerns to the Friday the 13th devs, worrying about the game’s release window, which is still set for “early 2017”. Many players were hoping for a concrete date by now, so the developers have stepped in to explain the situation.

If you want to know all the other dates, check out our upcoming PC games list.

Basically, it’s consoles holding it back. The developers are waiting for the feature-complete build to pass console certification before they can go gold. The thing is, console certification requires the game to pass a specific checklist which varies by region. Oh, and they can’t see the full list.

“The only reason you haven’t seen a release date is because we have to pass console certification,” explains a forum admin. “Let me explain what that means. Once we have a candidate (feature and content complete) we have to send a build to Sony and Microsoft. Their internal teams test the game against a very intense checklist to make sure we pass.

“We have some details on how this process is “graded” but we don’t have everything they check against. Additionally, each territory has different guidelines. Let’s just look at Sony. There’s SCEA, SCEE, SCEJ and Sony Asia. Each of these territories has a different rule book and we don’t have access to all of these. So, to a certain degree, we go at this a little blind. What passes in North America, may not pass in Japan for example.”

It sounds like an absolute nightmare. It doesn’t help that some of the requirements are completely daft. For example, Microsoft require the game has some kind of Kinect support, even though they gave up on the motion sensing camera ages ago. It also needs to work with Xbox One’s voice commands and allow players to run it while using other apps.

“So all of this to say that we’re not withholding the launch date because we’re a-holes,” the post continues. “We don’t think it’s funny to always say “Early 2017”. On the contrary, I wish we could say an exact date. But there are variables with the certification process that our out of our control. The last thing I want to do is give you guys a date, only to find out we failed certification and to actually pass cert, we need 3 more months. That would suck big time. Console players would have a date in mind only to hear it pushed 2-3 more months… that would be devastating, right?”

Once the game has gone gold, the release will be around 30 days from then. Rules are different for PC, but clearly the developers are aiming for a simultaneous release.