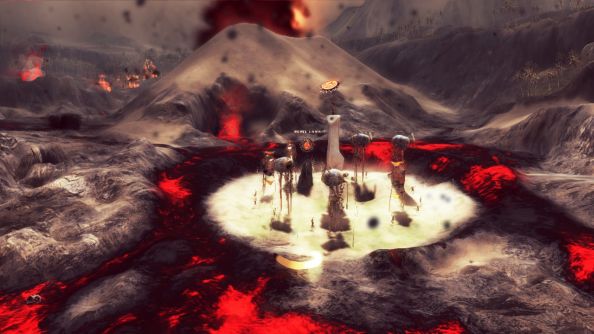 In the end, when the trumpet sounds and all game designers are called to stand before Will Wright to count their accomplishments, Eric Chahi will be remembered for the minimalist cinema and eerie beauty of 1991’s Another World. But he’s known to a second generation as the designer of From Dust, the god game built 20 years later with the backing of Ubisoft. And from the sounds of it, he’s returning to similar inspiration for a new project.

Fancy poking at some systems to see what happens? Try one of the best sandbox games.

The news comes from the Digital Lounge’s Daniel Ichbiah, writer of the Chahi biography fighting this month to be Kickstarted. The journalist has released an infographic entitled ‘10 Things Worth Knowing about Eric Chahi’, and one of those things is that he’s “currently working on a new project involving volcanoes”.

Volcanoes doesn’t necessarily mean god game, of course, but they’re one of the genre’s favourite signifiers. They were a fixture of From Dust, where an unlimited source of lava meant materials for walls to protect villages.

Are you a From Dust fan? It was made at Ubisoft Montpellier, the part-time home of fellow French design favourite Michel Ancel. You can now play the thing in your browser, oddly enough.