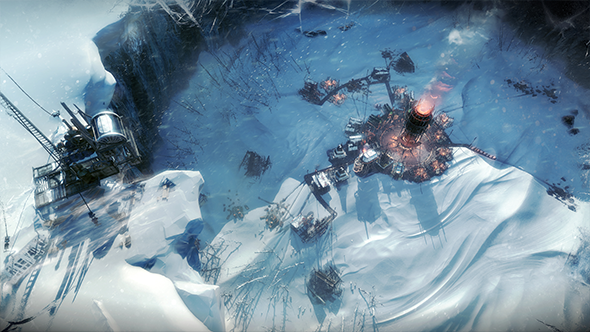 On the first night all my people froze to death. The -20 degree cold made fast work of the huddled families. Their fingers stiffened, their toes numbed, and one by one they became still as statues. Silly, really: I’d forgotten to turn on the coal-burning generator at the centre of town.

For a different sort of horror, Cities: Skylines is dealing with poop in its Green Cities expansion.

Set at the end of the 19th century, 11 Bit Studios’ city builder Frostpunk puts you in a world that has been swept by arctic storms, killing millions, and the pockets of humanity that are left clustered around unfinished generators. As city manager, you have to get one of these generators running, maintain it, and then expand its warmth to cover an entire city so that its people can survive the long winter.

The immediate threat is the cold; it meets your mistakes with sickness, frostbite, and death. If you don’t find enough coal and your generators powers down, or you don’t have adequate housing for your people, or even if you send your miners to work on a particularly harsh day, then you will be punished. 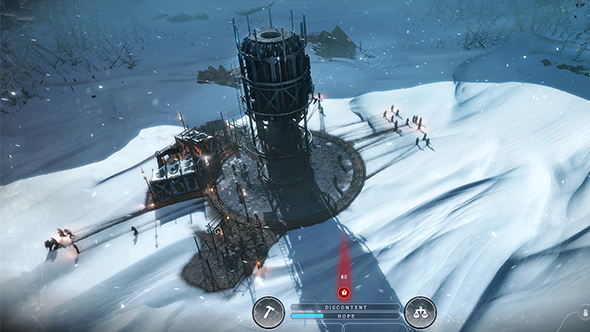 As I found in my second attempt at the demo, you can’t just focus on battling the cold, though. I sent my workers to collect coal which I used to fuel the generator (which I remembered to turn on this time), while directing my remaining workers to build tents to shelter them from the worst of the cold. Still, I soon found myself having to distribute my limited resources as best I could about the town. Besides coal, I had to get food, wood, and steel. I needed to use some of my workers to staff the infirmary, the workshop needed engineers so I could research new technologies, and if I wanted to make the most of my food then I need to pull workers away from the resource fields to cook the game my hunters brought back. Even space is at a premium: only the buildings closest to the generator will be heated, so if you have your houses just a row away from the heater the occupants will get sick and freeze in the night.

Frostpunk fast becomes a game about keeping a frozen toe ahead of a desperate situation, managing the many demands on your attention. Many city builders are about resource management, but Frostpunk’s setting – the simple, unforgiving harshness of winter – lends those mechanical demands gravity.

The biggest challenge is keeping pace with the changing needs of your town. When Frostpunk starts there are piles of loose resources near your generator that your workers can gather. However, they’re finite and once those piles are depleted you need to have built mines and saw mills or you’ll quickly run out of resources. Before you can build those resource buildings, you need to research them in your workshop, which means you need to have set aside the resources to build the workshop, the resources to research the buildings, and the engineers to staff the workshop. Doing all this will have been at the cost of building and researching other buildings – like warm housing.

Through the workshop, you can also learn to build a beacon, a vital addition to your town. The beacon lets you hire scouts and gives you access to the world map. You soon find out that your small town is located in a vast landscape dotted with points of interest. Through the world map, you can then send scouts to explore abandoned observatories, ruined towns, and signal fires in the distance. There, they might find resources they can bring back to town or, if they’re lucky, survivors. This is the only way I’ve come across to expand your populace (or replace the people that have died under your leadership).

The world map is more than an access point to resources, it’s also 11 Bit Studios’ route to fleshing out Frostpunk’s alternate history. Every time your scouts search a new location you’re given a slight text description of what they find – frozen bodies, evidence of cannibalism, a map to other towns, stories of survivors who fled the storms to the south. It’s a dexterous way of humanising and grounding a game about balancing systems.

A final systemic twist that gives Frostpunk its harsh flavour are the game’s laws. Each day, you can set a new law for your growing town, some will dictate if bodies should be buried in a cemetery or left in a pit, others let you push your townspeople to work 24-hour shifts in emergencies. 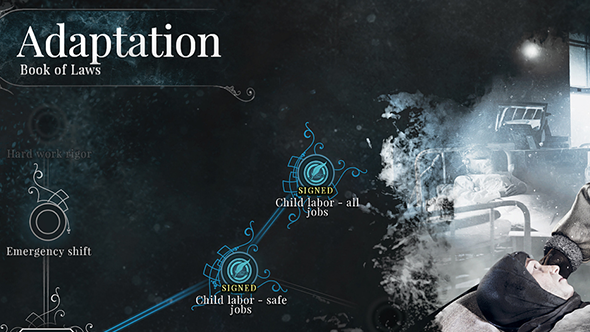 All of these laws have their plusses and minuses, like child labour, for instance. If you sign the bill forcing children to work then you increase your workforce with the stroke of a pen, which means more resources and a greater chance of survival. However, this decision can also spin off a debilitating chain of events. You might get a notification to say a child has died of frostbite after you sent them to collect coal in a storm. A dead child means discontent in the town rises, if that gets too high then you’ll be kicked out of town, ending the game. But, if you don’t use the child labour, you don’t get the extra labour, which means your people might starve.

I’ve only been playing a brief demo, one that lets me play the first ten days of the game, but with each playthrough I’ve been able to create radically different towns. Some of them have prospered, many of them haven’t made it past day four. Frostpunk is a city builder that is systemically going to push you to have an icy view of the people who work for you, pushing them to their limit for the good of the whole town, but one that also reminds you throughout of the the human cost of your choices.