Crusade is a two-pronged attack against Galactic Civilizations III’s status quo. The first assault takes on nuisances like the hefty UI and the sometimes hard-to-parse research screen. It brings clarity and streamlining. The second is the bolder attack. New races, espionage, citizens and meaningful invasions flesh out the galaxy and chuck in new challenges for good measure.

All these changes result is a game that flings new ideas at you with every turn. Some of them are subtle, and you’ll hardly notice them, but you’ll be glad they’re there when you do. Others are game-changers and big wrinkles that feel like a response to complaints that the third iteration of the series didn’t feel different enough from its predecessor. It might as well be a sequel, or maybe Galactic Civilizations III from an alternate timeline.

The most important attractions in this galactic amusement park are undoubtedly its citizens, and they seep into every aspect of the game. Simply put, they’re how you make big changes to your empire. Instead of tweaking your economic, military and scientific output through a bunch of impersonal sliders, you now train citizens every ten turns, specialising them and then slotting them into specific roles.

Say you’ve got a bit of a cashflow problem, but you’ve got a new citizen waiting in the wings. You can train them as an entrepreneur, and then choose to either add them to your government, conferring an empire-wide income bonus, or place them directly on a planet for a much larger, but more focused, buff. All elements of an empire and its worlds can be tweaked this way, from research to construction.

Every new citizen is an important gear in your galaxy-sized machine, creating myriad new paths for customising your empire. And the system is blessed with a clarity that sliders and charts don’t offer – it’s so easy to see, either from the governance or planetary screens, the impact these citizens have. And perhaps more importantly, it creates this sense that you’re really managing an empire and the people inside it, rather than just pretending to be a galactic administrator or accountant. 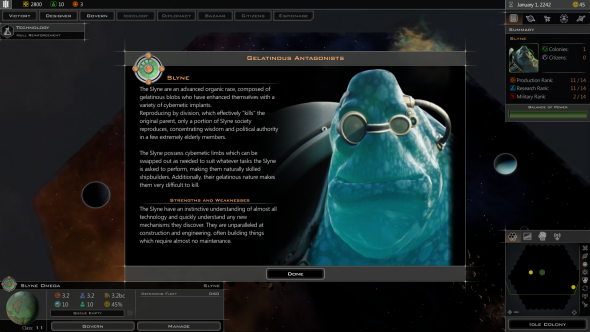 Citizens also play key roles in the reworked invasion system and the new espionage mechanic. They can be given command of fleets, boosting the strength of the ships, or they can be turned into generals in charge of legions and garrisons, protecting and attacking vulnerable worlds. Planetary assaults are significantly more complex thanks to this, with attackers needing to worry about taking out legions and cities, as well as regular civilians whose ability to defend worlds is determined by their resistance modifier – itself determined by approval ratings and buffs from generals. And an invasion needn’t be just about conquering a planet. You might, instead, be focused on taking out particular buildings, sacrificing your legions in an effort to cripple production or research.

It’s a bit confusing and, at first, not particularly clear if you’ve grown comfortable with the old system, but it’s considerably more engaging and forces you to think tactically now, instead of just flinging troop transport after troop transport at enemy planets. You’ve got to consider a lot more moving parts, but there’s also more going on in between victory and defeat, and plenty of rewards even if you don’t manage to take over a world. 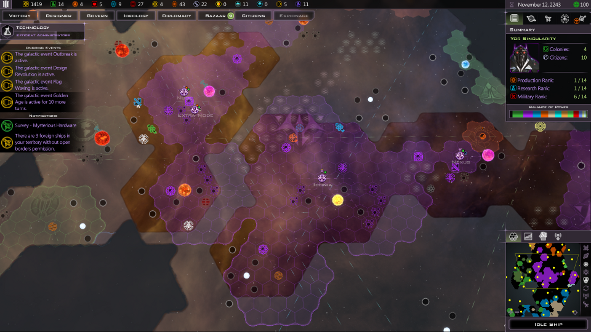 Espionage is a little simpler. You train a spy, place it in an empire, and then you wait. The more spies you have in an empire, the more information you get about it, and the greater chance you have of performing random missions like stealing technology. Spies can also be sent to alien worlds to cause a bit of disruption, neutralising the bonuses on tiles they are placed on, sabotaging buildings and provoking citizens. The more you upgrade your spy through promotions, the more nefarious schemes they can cook up.

All citizens can be promoted, gaining new abilities, so it’s important to keep them working. This just about balances out the feeling that, sometimes, they can feel a bit too automated. You put them somewhere and forget about them. Leveling them up gives you a reason to get hands-on again though, and by the late-game, you’ll have so many of them that you’ll always have at least one citizen that you can develop. 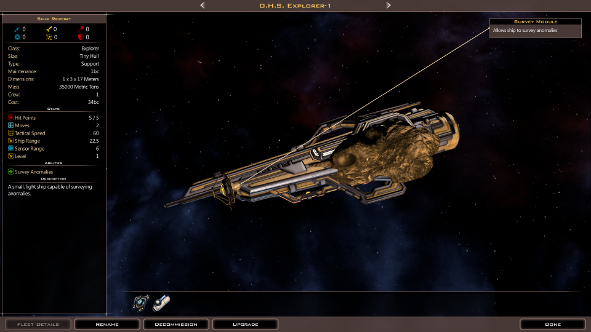 While all these busy workers are the new hotness, other resources – your energy and mineral wealth – have been given a makeover too. When you mine a resource now, you don’t just get one of that resource, you get a constant supply that generates slowly over time. And to put that supply to good use, a whole mountain of things, from special buildings to ship weapons, require specific resources like antimatter or thulium. You need them to grow your population, to build even simple fleets – essentially, you can’t win the game unless you’re drowning in a dozen different minerals.

This makes the economic side of things a lot more lively, as you constantly try to expand your supply to meet the increasing needs of your civilisation. It also enhances diplomacy as every empire starts haggling for the resources they need. And gosh is it fun to have a monopoly and watch as one-time enemies come to your throne to grovel. This does, however, mean that aliens have become more chatty. Perhaps too chatty. They’re constantly knocking on your door, asking for more of your lovely minerals. Or they’re kicking down your door and smashing up your precious starbases. Sometimes you just want them to give it a rest. 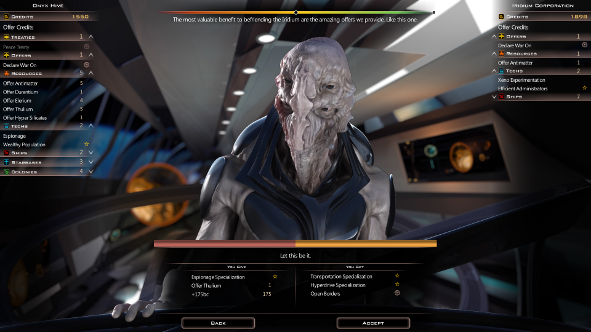 It’s a good thing, then, that diplomacy is generally a lot more sensible, despite the often ridiculous frequency of chats with aliens. There’s greater logic behind the deals they will send your way, based on a multitude of different things, from their traits to the size of their treasury. And, unlike the vanilla game, they’ll rarely waste your time. Sure, you’ll sometimes be offered deals that favour them more than you, and you’ll probably tell them to bugger off more than once, but the deals never feel absurd. There’s always a clear reason why they’re offering and demanding what they are.

I’ve mentioned the UI a few times, and it bears repeating: it’s a lot better. While there’s still a whole host of menus waiting to be explored, most of the important information is displayed, cleanly, on the main screen. At most you need just one click to see absolutely everything, if that, so tracking your position as a galactic superpower, keeping an eye on your fleets and keeping tabs on survey ships becomes a doddle. It’s great… until you hit the ship designer. 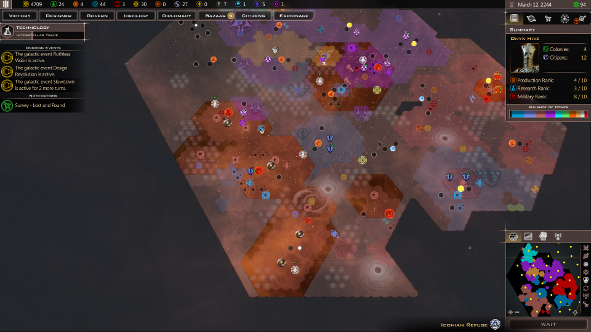 Trying to navigate the roster of vessels you can construct is just one giant headache full of dropdowns and tiny icons and way too much information crammed into little boxes. It’s a pain to manage and simply looks ugly. And the auto-designer, which makes ships that you can churn out straight away without personally designing them, is a horrible nightmare, seemingly incapable of properly using the techs that you’ve unlocked, instead coughing up crappy ship after crappy ship. If you don’t fancy designing your own custom fleets, you’re out of luck.

Designing ships is, of course, a major part of the Galactic Civilizations series – so you’ll probably want to do that regardless. What’s great about Crusade is that you can now create custom fleets for empires that you’ve personally designed. Previously, you could make one ship, but now every single class of ship can be customised for your fancy, homemade empire, and there are a bunch of new customisation options to force you to spend more time than is healthy crafting your weirdo galactic conquerors. 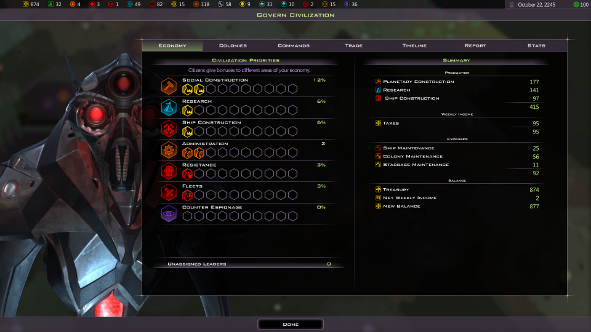 Changes to empire design go beyond making your space-faring armadas, however, and even affect pre-existing races. New and reworked traits and abilities make them more specialised and impact what ships you start with (even if you start with a shipyard, which is no longer a given) or what techs you can research. So while empires get their own unique tech trees, they’re not unique to the race, per se; instead they’re unique to that specific selection of traits that define the empire. Further enhancements come via personality modifiers that inform how the AI behaves and what flavour text is used in specific situations.

I’ve not even touched on the new races yet – two aliens and one new human faction – who each smartly lean into playstyles that emphasise the DLC’s new systems, or how species are now split into carbon, silicon and synthetic life forms with their own little hooks and wrinkles. I’ve learned that sneaky, volcanic worms start off slowly before inserting themselves into every empire, and that technologically advanced space amoebas are pretty aggressive and not to be trifled with. Even though the list of empires is large, every one feels distinct and, often, very weird. 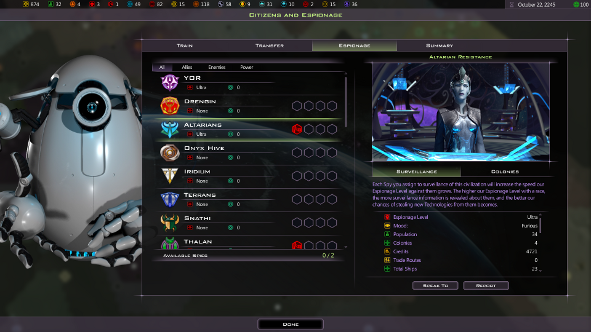 For all the big redesigns and sexy new additions, it’s just as often the small things that have made my return to Stardock’s galaxy enjoyable. Like how starbase upgrades no longer need constructors – you can just buy them instead of building a brand new ship and sending it to do the work. Then there’s the permanence of troop transports, no longer suddenly vanishing once they’ve made their marine deposit. So much of the faff and rigamarole of dominating space is gone. And I never knew how much I wanted population growth to slow down, or for happiness to matter more, until I saw the welcome changes they made to the pace, removing that dull early colonisation rush. They’re little quality of life improvements that elicit sighs of satisfaction.

It’s strange for DLC to mix things up this much. Even big, expansion-sized DLC. This is almost reinvention, rather than evolution. That’s not to say that this isn’t still very much Galactic Civilizations. It’s experimenting in different ways to the likes of Endless Space 2 or Stellaris, and the foundations of both the series and this particular entry haven’t been forgotten.

So it’s great, then. An expansion that makes arguably the best game in the series, even if it was a tad conservative, better and more exciting. But the real coup is how it makes every turn feel important. There’s always a new deal to be made, more citizens to groom, burgeoning worlds to fine-tune and enemies to spy on. Crusade’s tireless pursuit to make the moment-to-moment management as engaging as a galactic war is the real headline feature.