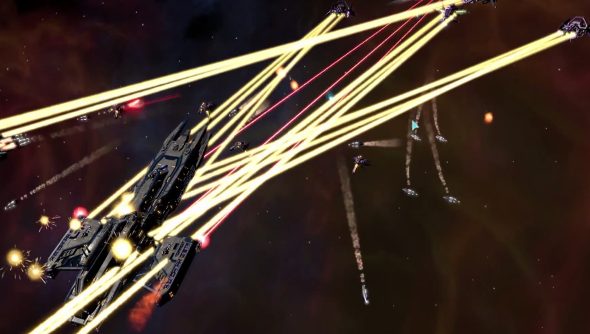 When Galactic Civilizations III’s Early Access kicked off, there wasn’t much there apart from war. But Stardock immediately started to flesh things out, adding to the ship builder, putting meat on the bones of system management and, by beta 2, there was even peace in the galaxy, thanks to diplomacy.

Since then, the blood lust has taken over. The game has now reached beta 4, and with it comes the battle viewer. Finally, you’ll be able to watch your entire fleet get smashed to bits by a moody Drengin.

Galactic Civilizations II’s battle viewer was a bit rough and a bit hard to follow, but this new version what looks like a proper space battle rather than a hectic mess of ships flying around and blowing up.

Extreme worlds also make their Galactic Civilizations III debut. Whole planets filled with snowboarders and people who like to randomly climb things without a rope – what wonders will they hold? You’ll need advanced technology to establish a settlement on one of these radical planets, though.

The new ideology tree is now an even newer ideology tree, thanks to a big overhaul.”Now you progress down five different branches of each ideology, going deep or wide or some combination of the two,” explains Stardock. “How does finding hidden planets, or adding a free fighter escort to every fleet sound?”

A game of Galactic Civilizations is, for me, something to be savoured; something to be laboured over for many nights, until the galaxy is mine, or I’m dead. And in the game. So I favour maps that are on the larger side – massive bloated things with countless worlds, where the exploration phase of the game lasts for days. Maps of that scale have been missing from the third outing, but with beta 4, immense and gigantic maps have arrived. They aren’t the largest, though. That’s the insane size, which has yet to be shoved into the game.

You can browse the large changelog over on the next page.