There comes a point in most Galaxy Heist matches when the multiplayer FPS as we know it is blown wide-open. The staccato back-and-forth of Halo-like gunfire is interrupted by the whine of a pulse gun charging up, and suddenly space pirates are sent ragdolling. The glass edge of the map cracks and then splinters, flinging nearby players out into a silent abyss.

In the few moments afforded to them before asphyxiation, the ejected players look back at the ships they’ve been fighting on: two vessels locked in angry embrace, part of a much larger battle raging on amid the stars.

At the outset, a typical match of Galaxy Heist resembles something from the happily revived space dogfighting genre. Players are split into crews of four or five and tasked with defending one of several flagships – manning its turrets, and hopping into smaller fighters to see off opponents. Drones zip about between the motherships; pew-pew blues and explosive yellows colour the vacuum.

But the crews also have a third tool at their disposal: a grappling hook which, when fired from one flagship to another, can tether the two together. Players then plant charges on the outside of the defending ship and break into its interior – which doubles as an FPS map.

This isn’t exactly a contemporary shooter: iron-sights are a low priority feature right now, and the firefights most closely resemble Halo. Space Bear Development are consciously moving away from the upward progression systems of the modern multiplayer FPS.

“I want it to feel like players can jump into a match for an hour right away when they get home,” said Space Bear Development founder Ryan Lee. “And not worry about grinding or how long the other guy has been playing for. I want it to be skill-based, so that anybody can have fun killing each other on ships.” 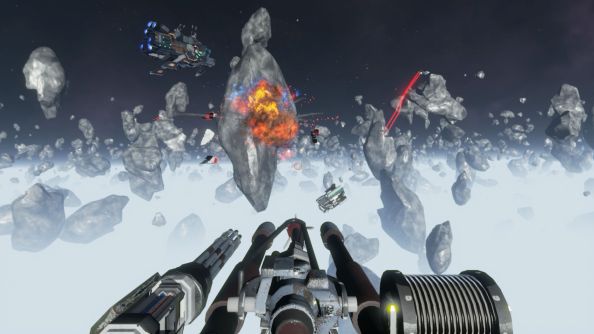 The ship interiors are separately instanced maps – temporarily removed from the larger battle while boarding is resolved. But Space Bear don’t intend to let players forget that they’re trading shots inside a gigantic vessel in the void.

“We try to make it feel like a dynamic, living ship,” said Lee. “Not just a map.”

To that end, the ships have systems. When players restore power, doors can be unlocked and lights turned on. And engines in the back sport lethal fan blades, which can chop careless combatants to bits. Environmental awareness is a survival necessity.

Best of all are the windows which, when blown out, rips players along corridors and out into space.

Space Bear have restricted this glass-shattering capability to a single gun – “We realised pretty quickly that everybody would just blow out a window, just because”. But when a player deploys that charged pulse, they trigger a new phase of the match; the whole ship loses oxygen, and defending players must make their way to the bottom to boot up emergency oxygen supplies. 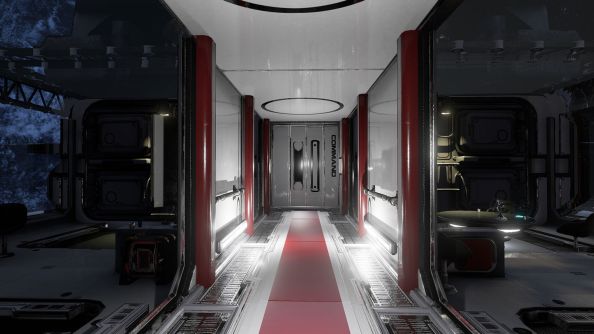 Detach the camera in your average multiplayer FPS and you’ll tend to find there’s nothing outside the zone of play – maps are designed to be seen from the inside-out. But Space Bear haven’t had that luxury. As players drift off toward certain suffocation, they can admire the same ship modelling they see during the larger ship battles.

Galaxy Heist’s maximalist concept has created an astonishing amount of work for a team that’s totalled eight at its highest. They’ve coped by keeping the scope down – scrapping initial plans for persistent areas of space and an economy for the buying and selling of items.

“I funded the game myself up to this point,” said Lee. “That helped a lot – if I’d made a mistake or paid someone to do something we didn’t end up using, then I was only wasting my own money.”

The team interwove the game’s two disparate parts by breaking them down into small pieces. Lee said it wasn’t “too hard for a decent programmer to get working” – and Space Bear’s programmer is more than adequate. 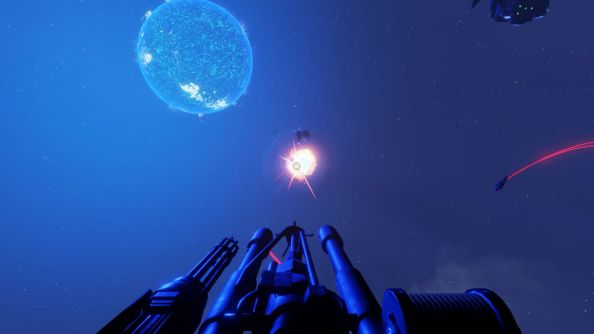 Rama is a known name in the Unreal Engine 4 community – a font of technical knowledge and tutorials. He coded the basics for Galaxy Heist’s space and FPS combat in about 10 hours each, and has built on them ever since.

“He can make anything,” said Lee. “Even if there’s a bug in the Unreal Engine himself, he’ll fix it in the source code and push that to Epic, and they’ll accept it. If there’s a problem, they’ll work with us on it.

“Epic actually flew him out to their headquarters last year just to take him for lunch for the day, to thank him for all his help.”

Rama built turrets for Galaxy Heist that aren’t fixed – letting the team drag and drop them onto different parts of their ships, and allowing for customisable or destructible turrets down the line.

Lee and Rama are backed up by a team with an unusual amount of engine expertise. Tesla made YouTube Unreal tutorials so successful that he now offers one-on-one UE4 tutoring professionally. Lee initially met him once a week to learn more about the engine, but wound up recruiting him.

“The game has looked about 10 times more impressive over the past couple of months,” said Lee. “It’s all come together at once – it’s really cool to see.”

Space Bear have taken Galaxy Heist to Kickstarter this week. They’re looking for £65,000 to polish off their playable build, and they might just get it. After all: that window-smashing footage sits front and centre in the pitch video.

“Blasting people outside the ship and watching them flip through the hallways and up the stairs and stuff,” enthused Lee. “Flipping characters into ragdoll never gets old.”

In this sponsored series, we’re looking at how game developers are taking advantage of Unreal Engine 4 to create a new generation of PC games. With thanks to Epic Games and Space Bear Development.