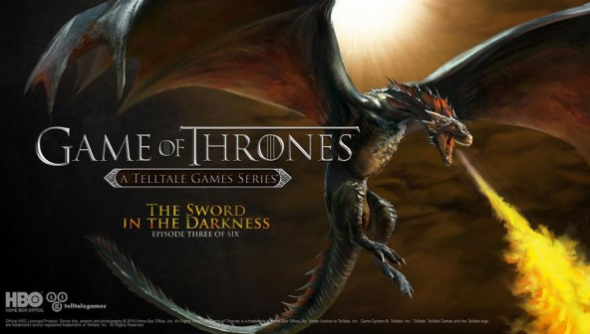 Telltale has started building some hype for the third episode of its Game of Thrones adventure game, which should be releasing in the near future. The poster image the developer has released today features artwork illustrating a fire-breathing dragon, suggesting the episode may be the game debut of Daenerys Targaryen.

Drogon, Daenerys’ black dragon, is the winged beast in the picture, and a frequent sight around the Mother of Dragons. The title of episode three suggests more of a focus on the Night’s Watch, however. Titled ‘The Sword in the Darkness’, Thrones fans may know those words as part of the oath sworn when men commit themselves to the black of the Night’s Watch.

It’s been obvious that the game has been leading towards the assault on the Wall as seen in Season 4 of the HBO TV series, so will this episode divulge further into the defence preparations of the watch?

Not played any of Game of Thrones yet? Check out Fraser’s review of episodes one and two to see what you’ve been missing.