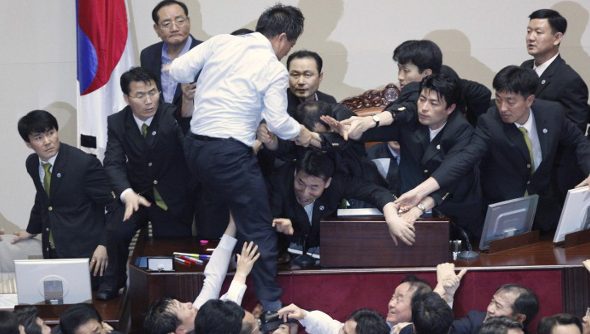 A bill that seeks to classify gaming as addictive behaviour like gambling and drugs is being considered in the South Korean parliament, supported by doctors, parents and religious groups, reports The Guardian. The legislation would limit advertising and a second bill would take 1 percent of the industry’s revenue and spend it on curbing addiction.

While advocates of the bill cite extreme situations where irresponsible individuals have allowed babies to starve while they played games or claim that it has a negative impact on education (contrary to numerous studies that show the positive impact of gaming on development), members of the industry have obviously taken exception to it. “The 100,000 people employed in the game industry are not drugmakers,” the Korea and Digital Entertainment Asssociation responded.

Unfortunately, there will always be instances where people have a lack of restraint and spend too much time gaming, and while they are generally the exceptions to the rule, they make great headlines and are a sure fire way to spread panic amongst those who are looking for a scape goat.

Kim Min-sun, mother of two said “without online games, kids would talk to their mother and play,” because apparently you don’tplayan MMO, you just feed an addiction, and before gaming, everybody wanted to speak to their mum. Maybe Kim Min-sun’s just not very interesting to talk to, but it’s far more likely that her children are the victims of insidious, addictive games.

Just as with drug and alcohol addiction, gaming addiction is realistically more likely to be a symptom of a greater problem rather than the cause. Where drug and alcohol abuse are often symptomatic of education issues, a difficult family life or poverty, in South Korea, gaming addiction might be linked to stress at school. The Guardian cites a survey conducted by the Organization for Economic Co-operation and Development which found that South Korea had the lowest percentage of children who were happy at school in a pool of 65 countries.