Look up from your screen. What if that entire wall opposite you was your gaming monitor? That’d be cool, right? It can be. You hear me? It can be! And for a lot less than you might think; this is the wild world of short-throw gaming projectors.

If you don’t have a wall big enough for a projector, settling with one of the best gaming monitors isn’t too much of a compromise.

You canbuy an expensive, immersive ultrawide monitor for over a grand, but that’s going to get you, at most, a 38-inch panel. That’s, frankly, rubbish – I’ve seen postage stamps bigger than that. Seriously: there’s a postal museum just down from the office, it’s where the super-cool kids all hang out in Bath.

What you really want, then, is a projector capable of spitting out an enormous image with the fidelity of a modern gaming monitor. The historical problem with projectors, however, has been you’ve needed an enormous room to be able to get enough throw distance between beamer and wall for a pleasingly broad image. That, and the fact that input lag has generally made it feel like you were gaming on a late noughties LCD telly.

But that’s all in the past because now we’ve got short-throw projectors, specifically specced to reduce input lag in a similar way to modern TVs and their ‘gaming modes’.

As the name might suggest, the Optoma beamer uses the DARBEE Visual Presence image enhancer tech to give you a more detailed picture, despite it still only being presented with a 1080p resolution. The processing tech does actually work surprisingly well, giving an extra little bit of crispness to the proceedings.

It’s a bit of a pain that there’s no physical zoom function to fit it to your wall, and that the digital adjustments get disabled the moment you start playing around with the DARBEE settings, but it’s still a nice visual improvement. 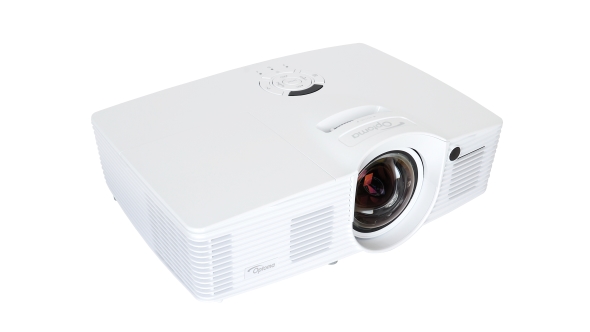 But that’s not the impressive thing about this projector – it’s the unbelievably short distance it needs to be able to produce a genuinely enormous picture. The GT1080Darbee is able to deliver a 100-inch screen while being just a touch over 1m away from the surface it’s beaming onto.

Traditional projectors with a standard throw distance need to be well over three metres away from the surface to achieve such a feat. That might be fine for you mansion dwellers, but for the likes of me, in my 19th century terraced house, that would mean demanding a whole lot more space than I can possibly offer.

The BenQ W1250ST has a slightly longer throw distance, requiring a bit more space to be able to achieve the same 100-inch screen size, but at 1.5m that’s still small enough to fit in my li’l West Country Hobbit hole. 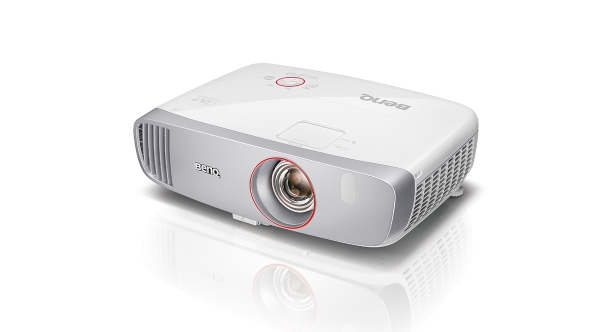 This short-throw distance makes them great options if you want to shift them around, too. Want to take your beamer round a friend’s house to make them jealous as you settle in for night of big-screen gaming? No worries, both the Optoma and BenQ projectors come in lovely little (actually rather large) man-bags. And, because they require so little actual setup, they can essentially be used as plug-and-play devices connected to any laptop, desktop, console, or TV set-top box.

But what about gaming? It’s frickin’ glorious. The benefit of being restricted to the 1080p resolution means that, unless you’re running on a proper Jersey Royal, you’ll be able to nail super-smooth frame rates even stretched across a beautiful 100-inch vista. Big-screen gaming is the canine’s danglies, especially if you’re playing something arcadey, like GTA or FIFA. I lost a good few hours booting up GTA V for ‘a quick bit of testing’.

And the input-lag-reducing tech the two beamers use makes them responsive and accurate. They both claim ~16ms ratings in terms of their input lag under their respective game modes, but we’ve seen independent reports of it being more like 20ms in actual use. That’s still absolutely fine for gaming, with even Sony’s best TVs being between 17-20ms. 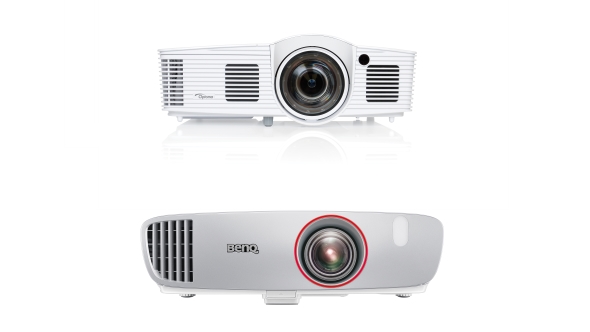 So why the hell aren’t we all gaming on massive projected images? Because it’s a long way from being the most convenient way to game. Even if you can think of the perfect wall in your home upon which to project your awesome Destiny 2 skillz, the chances are it’s a long way from where your desktop PC is stashed. It’s almost the same issue we have with VR – you need space and setup time.

You don’t want to have to drag your PC to wherever you’re able to beam. Nvidia’s impressive Shield TV box is a good solution, however, introducing only the slightest extra bit of input lag to streaming your PC’s gaming talents across your home network. It’s tiny, can be wired or wireless, and is incredibly versatile.

That’s not the end of the awkwardness, though. As gamers, we’re not averse to drawing the curtains to block out a particularly beautiful day, but if you want to use your projector at all outside of the hours of darkness you’re going to get a severe vitamin D deficiency. As bright as our beamers get they’re never going to be as retina searing reflecting off a wall as a HDR panel running at 1,000cd/m2.

There’s also the fact you may be one of the unlucky few particularly susceptible to the dreaded ‘rainbow effect’. This is a function of these kinds of digital light processing (DLP) projectors that only use a single chip for imaging, projecting all the red, green, and blue colours in a scene sequentially. For some people, the seperate colours can become visible, especially in darker scenes, when they move their eyes.

It’s got much better, and I didn’t see any evidence of it with the Optoma beamer, and only the very slightest rainbow with the BenQ, but I was really,reallytrying. 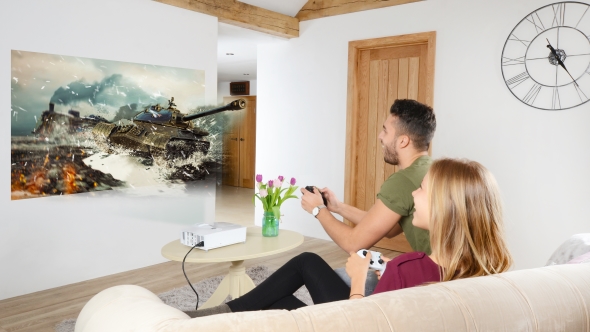 You’re also going to need a good sound system to attach to your projector setup. I’m not talking about the built-in speakers, which are, admittedly, normally ropey as rodeo lasso competition, but the noise the beamers themselves produce. To produce the amount of light they do they run hot, and need some serious fan action to keep things chilled. And that also means the hot air they generate and force out of the projector’s innards gets spilled out into your room.

From my own sticky experience, big-screen beaming gets mighty toasty when gaming on a summer’s evening, I can tell you…

Of the two projectors we’ve been playing with recently, it’s the BenQ W1210ST which fares the best on this front. It’s still definitely audible, but because of its larger chassis the cooling is more effective and it’s noticeably quieter than the Optoma. Speaking of speakers, because of the increased size of the BenQ beamer, they sound a little richer too.

Finally, you’re also limited to 1080p if you don’t want to start getting into four figure price tags. The current crop of 4K projectors aren’t really game-ready either, so you’d be likely suffering from the bad old days of beamer input lag, too.

But when your eyeballs are filled with your favourite games, writ large on the side of your house, it’s hard not to get a little goose-pimply over how good it feels to plumb your PC into a quality projector. And that’s exactly what you get with either Optoma or BenQ’s gaming beauties.