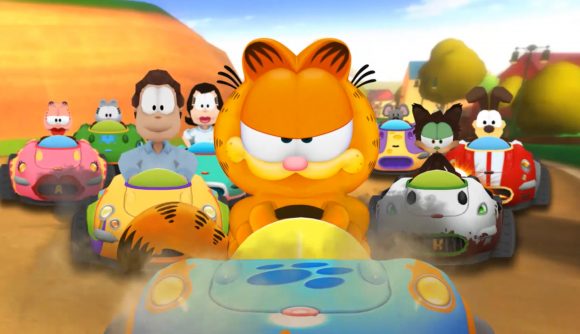 PC is a terrific platform to play games on, but it’s not a perfect one – after all, some games only come out on consoles. For example, we’re still awaiting a PC release for Crash Team Racing, which means your kart racing options are limited. Death Stranding will launch as a PlayStation 4 exclusive, leaving PC players to miss out on a major release early in November. Now, what if I told you one of the biggest franchises of all will launch a new kart racer on Steam days away from the Death Stranding release?

Yes, that’s right, Garfield Kart: Furious Racing comes to Steam (as well as PlayStation 4, Xbox One, and Switch) on November 5 in the US, and November 7 in Europe. That’s just before Death Stranding, and as Nibel notes on Twitter, there’s truly no place for Hideo anymore.

I’m not exactly sure what’s new in this Furious Racing release, as most of the features in this press release are exactly the same as those listed on the original Garfield Kart Steam page. Those include eight characters, 16 tracks, and three modes of play across Grand Prix, Single Race, and Time Trial. The one thing that appears to be new is online play.

Garfield Kart garnered enough notoriety through streams and Let’s Plays to get its own Know Your Meme page, and I fear publisher Microids might’ve mistaken jokes for legitimate interest in Garfield karting action.

But it’s 2019, and the line separating legitimate and ironic enjoyment is thinner than ever before. There aren’t many certainties in this world, but I do know of three: Mondays are bad, Garfield is good, and you could choose to play Garfield Kart instead of Death Stranding.