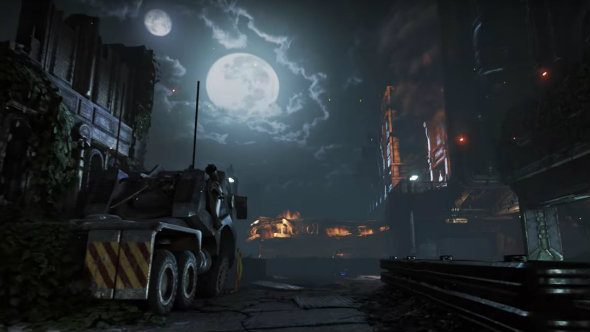 <p>It’s time to fire up your Lancer’s chainsaw bayonet, as Gears of War 4 is getting a healthy chunk of new content in February. Due to be released along with a raft of other content updates, the key standouts are two new maps; well, they’re actually redesigns of original maps, but one of them promises to put those sneaky snipers on the back foot once and for all.</p><p><em>Not a fan of the  third-person co-op action of Gears of War 4? Check out our top games to play with pals online with our list of best co-op games.</em></p>

Impact Dark is a reimagining of the original Impact map, but is now covered in thick smoke and embers, favouring close-combat over long-range headshots. According to Ryan Cleaver, Multiplayer Design Director at The Coalition in the above trailer, “… the dynamics of play are much more claustrophobic”, with visibility cut-down to just a few meters ahead of the player.

To balance this out, the original map’s sniping weapons have been replaced with Boltoks, while Dropshots replace the Torque/EMBAR weapons. So if you’re the kind of cowardly player who likes to sit back from afar, popping off your foes with impunity, prepare to be impaled by charging players.

The other new map, War Machine, is another map based on a classic, yet this time around the decrepit design of the original has been replaced with gleaming, shiny new surfaces, looking like it’s just been opened to the public. It’s more of a cosmetic change than a revolutionary change of gameplay, which is no bad thing given how popular the original remains.

Along with the two new battlefields, there’s going to be a few other major changes included in the update. The Guardian mode gets a new spawning system where players spawn close to their leader, helping to keep the team together when the bullets are flying. There will also be Valentine’s Day themed bounties, a new craftable character and more. Best of all, Torque-bow Tag will be making a welcome return, though apparently there will be a “Cupid-style twist”. Perhaps your tagged target will make a bee-line for your lips if you hit them?

You can read the full update on the February Update announcement page here.