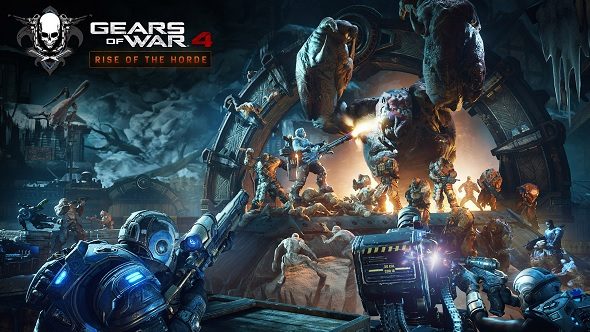 To celebrate the release of its Rise of the Horde expansion, The Coalition are releasing a free ten-hour trial of Gears of War 4 next week. Running from June 9-15, new members will be able to play through the first act of Gears of War 4’s campaign, as well as all of its multiplayer modes.

Work on your aim with our list of great PC shooters.

Inconceivable is a step-up from Insane, with players being even weaker while enemies hit even harder. You’ll have to beat Horde on Insane to unlock Inconceivable, so party up with your toughest COGs to access this difficulty mode. In campaign, Inconceivable adds a “survival-based twist” to proceedings, with ammo and weapon drops becoming exceedingly rare. Enemies do have less health to balance out this reduction in ammo, but your health has been reduced as well. Much like Horde mode, you have to complete the campaign on Insane if you want to play through it again on Inconceivable.

Ironman is the other difficulty option, where players only have one life for their whole campaign or Horde run. You can combine Ironman with other difficulties to create your own challenge, but expect some masochists to be going for that Inconceivable Ironman run straight out the gate.

As for the free trial, you’ll be able to play all of the Rise of the Horde content during your ten hours with Gears of War 4. The 10-hour time limit is not restricted to the June 9-15 time window; you can download the trial and use up your time at any point after June 15. To sweeten the pot, The Coalition are also offering additional Trainee Packs for new players as they level up, allowing them to unlock more characters, weapon skins and Horde skills. You will keep all of your progress from the trial if you upgrade to the full version of Gears of War 4, so don’t worry about missing out if you are tempted to enlist.

The Rise of the Horde expansion launches June 6, along with two new maps and Ranked Crossplay between players on Xbox One and Windows 10. For the full details on the expansion, as well as all the information on the free trial, check out the official Gears of War 4 website.