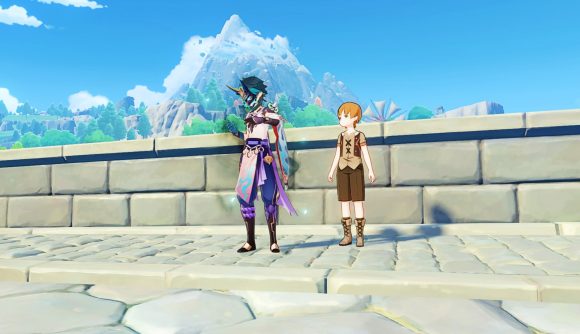 If you’ve played Genshin Impact, you’ve probably met Timmie. He hangs around just outside of Mondstadt on a bridge and moans at you if you scare his pigeons away. You can tell him that they’ll likely come back, and he’ll reply by saying that they usually do, but what happens if they leave one day and never come back? “Just like daddy” – oaft. Naturally, then, the community has taken to messing with the poor lad and blowing his flock of pigeons to smithereens.

It all started on Genshin Impact’s subreddit before griefing Mondstadt’s resident bird nerd became such an artform so unique unto itself that it required a subreddit of its own. The, ahem, F***Timmie subreddit has been going since December at least and shows no signs of slowing down with more than 5,000 people committed to picking on the poor chap.

While the subreddit is mainly focused on turning Timmie’s birds into stew ingredients, it’s also about pulling off rad trick shots while doing it. The place typically comes alive when a new hero releases as people weigh up how good they are at turning Timmie’s flock into roast pigeon. Xiao is a bit of a struggle, but people have found a way to make it work. Heck, there’s even a tier list if you want in yourself.

Ganyu is currently the queen of being not nice to Timmie and his birds. One player managed to lob an arrow at them from Springvale before teleporting and running to the bridge to watch the flock get vaporised.

Ganyu, the ultimate sniper from Genshin_Impact

So why are people picking on the virtual child? Players typically point towards his annoying demeanour. Getting from A to B can take a hot minute as you have a stamina gauge, so being told off by Timmie for scaring some pigeons while you’re trying to save Mondstadt from a dragon is bull.

He also tattles on you if you rustle his pigeons’ feathers too much, which is lame as you then have to do a quest that involves apologising to him. You get loot for it, so players naturally do it. Getting the quest is another point of pride that is shared on Reddit frequently.

(META) Poor pigeons, all because of timmie from fucktimmie

If you, too, would like to torment the virtual child, then our Genshin Impact builds guide might help. I don’t think it was made for that purpose, but, hey, who knows.