Looking for some great Genshin Impact builds for your starting characters? Most characters in Genshin Impact are only obtainable through the ‘Wishes’ in the gacha loot system. However, you will unlock four characters at the start of the game, simply by playing. The characters you will get are Traveler (that is basically you), Amber, Kaeya, and Lisa.

All four of them possess a normal attack, an elemental skill and an elemental burst. However, each one of them inhabits a different element and they all use different weapons, except for sword-wielders Traveler and Kaeya. As a result, you will definitely be able to create a varied team with just these four starting characters.

Of course, they are all four-star characters and not necessarily ranked among the best in the game. But don’t be worried; with the right weapons and Genshin Impact artifacts, all characters can become more than a handful in combat. You just need to find their strengths and know how to create a decent build around those strengths – you’ll be slicing through enemies in no time. With that in mind, let’s take a look at some of the best starting builds for Genshin Impact.

The biggest difference between Traveler and other characters, is Traveler’s ability to change Elements. When you start the game, your Traveler will be an Anemo character. But it isn’t long before you can switch to Geo. 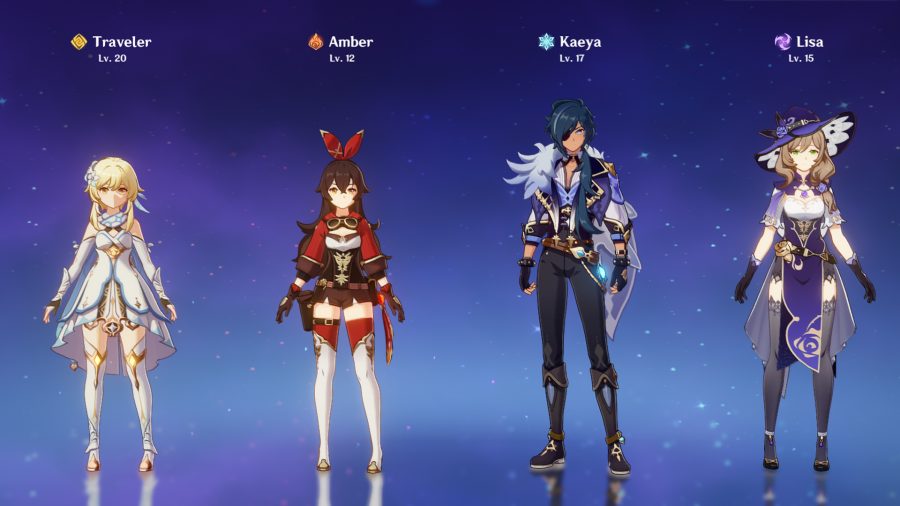 Anemo Traveler doesn’t truly excel at either, but does good melee damage and has good elemental skills. This is particularly useful in early game, when you’re not looking to specialise just yet. Use Anemo Traveler’s melee attacks and elementals skills interchangeably; dealing damage and offering support as you go. A sword like Iron Sting is perfect for this, as it increases all damage upon dealing elemental damage.

Viridescent Venerer is one of the best artifacts for this build, as it gives an Anemo and Swirl damage bonus. If you don’t have that one yet, consider using Instructor instead; it will increase elemental mastery for both Traveler and teammates. 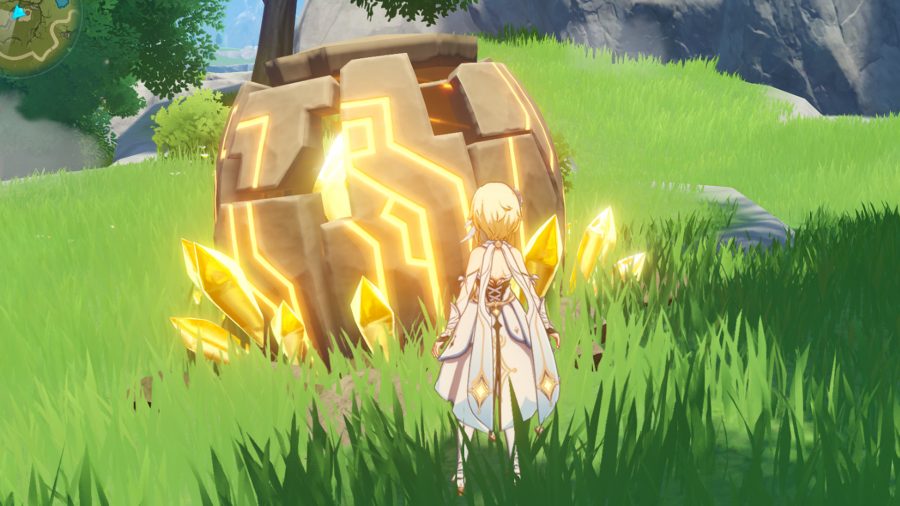 Geo Traveler has a lot of area control and can do a lot of AoE damage. The elemental skill is particularly useful as it can lift you, your teammates, or even an enemy, up. A good addition to this disruptive gameplay would be the Sacrificial Sword, which has a very high chance to reset the elemental skill cooldown.

There is currently very little opportunity to create elemental reactions with Geo skills. Therefore, artifact effects should not be triggered by reactions in this build. Instead, equip Gambler to reset elemental skill cooldown and do more elemental damage. 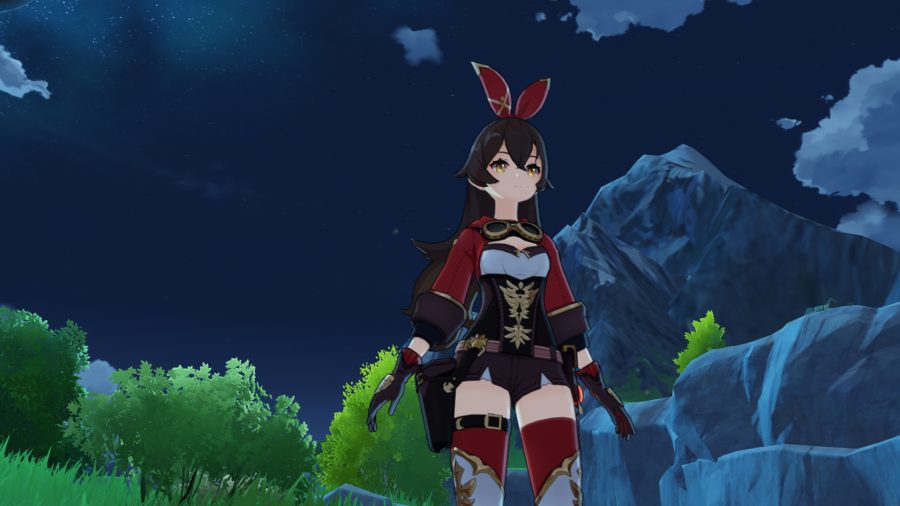 Outrider Amber does ranged Pyro damage with her bow. She is especially useful in exploration, as her main attack allows you to quickly set things on fire (such as brambles around a chest) and attack enemies from a distance. Although Amber is not the best as either a bow master or a Pyro, she can make a great addition to your team as a Ranged DPS or a Pyro support.

Amber’s fully charged Pyro shots can do a lot of damage when hitting an enemies’ weak spot. A Ranged DPS Amber should maximize that ability. Remember that this build will require some aiming skills from the player though, so just as well you’re on PC.

The Prototype Crescent bow, which will increase Amber’s damage after hitting a weak spot, is a great weapon for this build. A lower-star alternative is the Sharpshooter’s Oath. When it comes to Artifacts, try to increase Amber’s charged attack damage and elemental damage. Wanderer’s Troupe enhances both, so this is a great option.

The idea is to use Amber to set up a Pyro AoE, then switch to a different party member. After reaching higher Constellation levels, Amber’s ‘Explosive Puppet’ skill will have a decent enough AoE to set surrounding enemies on fire. You should also try to use her elemental burst. The best weapon to increase elemental skill and elemental burst damage, is the four-star Stringless bow.

After setting your enemies on fire, the Lavawalker artifact will increase the damage done to burning enemies. Alternatively, use the Noblesse Oblige artifact to increase elemental burst damage and grant teammates 20% extra attack power for 12 seconds. If you don’t have any of these, just remember that Amber is meant to swap places in this build, so prioritize Artifacts that give useful support to teammates. 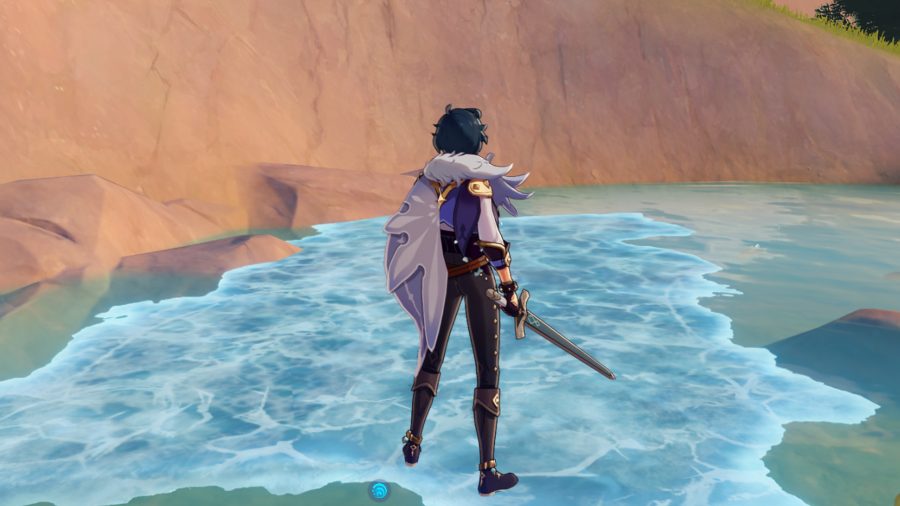 Eye-patch wearing Knight of Favonius Kaeya is a swordsman using Cryo. He does decent melee damage, and his biggest advantage is his ability to interrupt enemy attacks by freezing them. Kaeya is extra powerful in wet environments, so use him when it starts raining.

Kaeya’s freezing skills can be used to disrupt enemy attacks, after which other characters can take over. This build is most efficient when used in wet environments, or when having a Hydro character on the team. The Sacrificial Sword is perfect for this build, as it has a 40% to 80% chance (depending on weapon rank) to reset the elemental skill cooldown. You can immediately freeze again.

As Kaeya’s main purpose is to freeze and then swap places, use Artifacts that enhance his Elemental power and give support to the other teammates, such as Instructor. 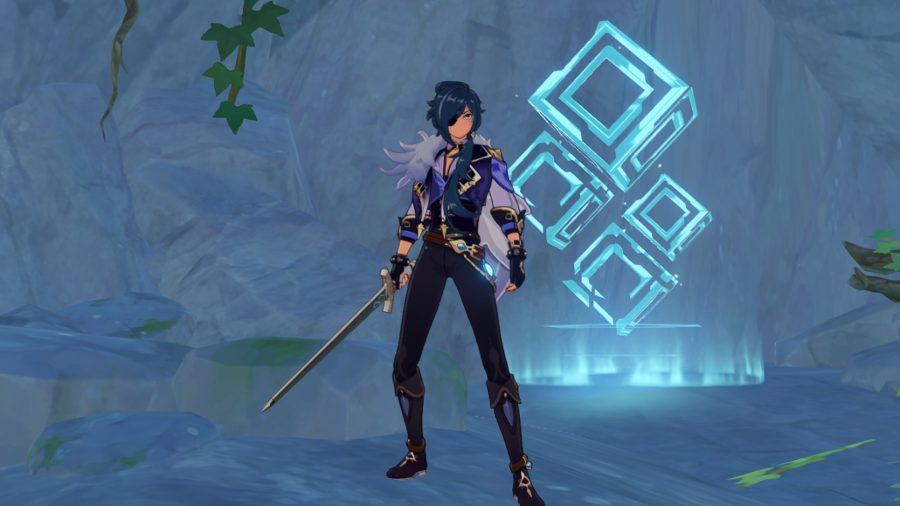 Kaeya can do steady (especially early game) melee damage by getting 5 consecutive hits, knocking back the enemy, and repeating the process while freezing when possible. If you choose this build, try to increase Kaeya’s attack power as much as possible. Gladiator’s Finale would be the best artifact to achieve this.

A great four-star weapon for this build would be The Flute. This weapon stacks ‘Harmonics’ upon hits, which will deal damage to surrounding enemies upon the fifth hit. In this build, you will be going after one enemy at a time, so this is a great way to damage others that come near you as well.

Librarian and witch Lisa is an expert on ranged Electro damage. All Lisa’s attacks involve Electro, so you should definitely focus on her elemental power, no matter what build you choose. Lisa can do massive AoE damage, which makes her one of the better starting characters. 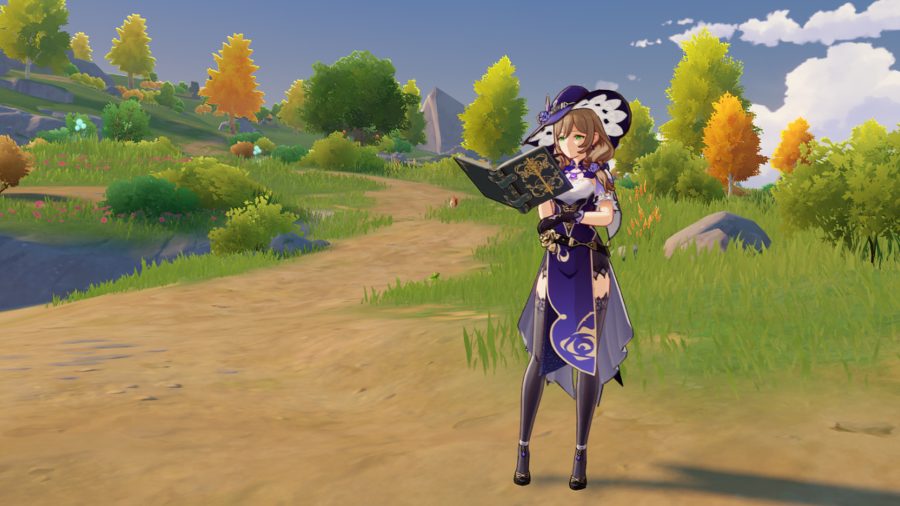 Both Lisa’s elemental Skill (when charging) and her Elemental Burst can do a lot of damage to all nearby enemies. Many catalyst weapons will either enhance Lisa’s elemental skill or burst. Since her burst is really strong, it is a good idea to focus on increasing its damage by equipping the Blackcliff Amulet.

Thundering Fury would be an amazing artifact for Lisa, as this will greatly increase her electro damage. Unfortunately this artifact is quite rare, so you might have to go for an elemental skill damage artifact like Gambler instead. This also comes with a chance to reset the cooldown.

This is the most specific build mentioned here because it’s especially for a team with Mondstadt characters. In early game, most of your teammates will be from Mondstadt and Lisa may be the only character that can equip the Wine and Song catalyst, which grants extra attack and speed to all teammates hailing from that city.

If Lisa is not really your favourite but you don’t have many other characters yet, you can use this weapon to build her as a full support. Adding a support artifact that increases her elemental abilities, such as the Noblesse Oblige, will complete this build.

More like this: Here’s how to add Genshin Impact to Steam

Genshin Impact allows you to freely change your playstyle whenever you want, so have fun experimenting and trying out these builds.