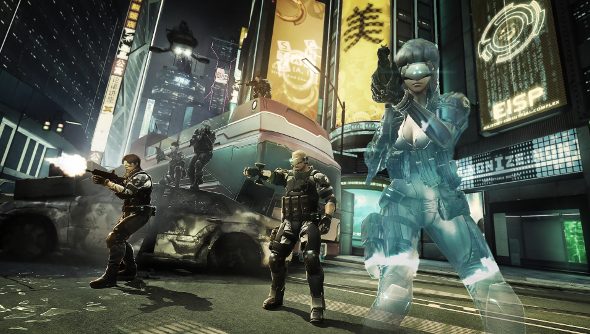 My hunger for cyberpunk takes me to the most interesting places, from New Berlin to The Sprawl, but now I’m in Niihama, Japan – a futuristic city in the near future and the setting of Ghost in the Shell – shooting terrorists and smashing through windows.

I’m playing Ghost in the Shell: Stand Alone Complex – First Assault Online. It has a cumbersome name, which seems appropriate given the wordy, sometimes complicated source material. The game itself, however, eschews the philosophical quandaries and politics of the films and TV show. It’s a fast-paced, free-to-play first-person shooter.

Why an FPS? Developer Neople and publisher Nexon have no doubt been asked this a lot already. Despite being full of slick, sci-fi action, Ghost in the Shell is more celebrated for its cerebral offerings. The franchise covers a lot of ground, however, and when it came to figuring out how best to use the license, Neople were inspired by a specific episode of Stand Alone Complex. 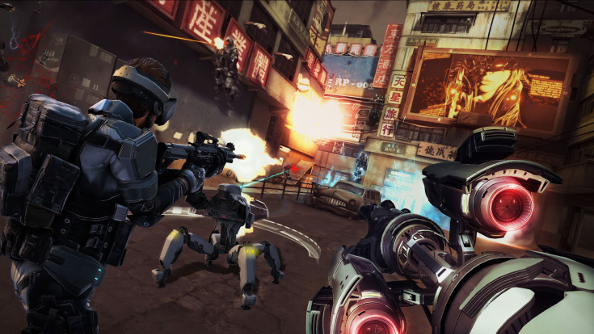 In episode 24 of the first series, Section 9, the agency that protagonist Major Kusanagi and her team work for, has been thrown under the bus by the government and find themselves fighting off a Black Ops unit. Section 9’s struggle to survive continues right until the end of the series and is full of high octane firefights and dramatic stand offs.

This inspiration grounds First Assault Online, giving it a level of authenticity that surprised me. The maps, playable characters, weapons and cyber abilities are all drawn from Stand Alone Complex, and made by developers who are clearly fans of the anime.

All that said, the game does not make a spectacular first impression. Today it launches in Early Access and, like many games that are made available this way, there are elements that probably need a second pass, like the unintuitive menus, and missing features like the ability to cook grenades. Initially, I was ambivalent at best. 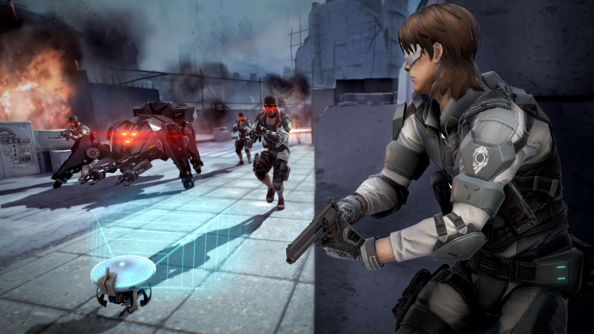 The three maps my team and I played in are taken from particular episodes of the show but, despite their authenticity, are all very plain and lifeless. Yes, they have that clean, futuristic aesthetic of the source material, but they look more like snapshots of places than tangible locations. And in terms of fidelity, the game looks at least five years out of date.

Potential undoubtedly exists, though. Underneath the rather forgettable maps and mostly conventional modes are ideas and features that, within a very short space of time, I began to appreciate a great deal. Take the roster of agents, for instance. So far they too are all drawn from the show, though new ones conjured up by Neople are in the pipeline. Every agent can use every weapon – currently earned exclusively by simply playing the game – but they are set apart by their unique special abilities.

The Major, for example, can cloak herself; burly Batou has an inbuilt rocket launcher; another agent can run faster and jump higher – they all have their own skills, which can be used once enough intel has been gathered, either by killing foes or just over time. On their own they are handy abilities, but it’s when they’re used in tandem that they really become effective. And I’m not just talking in terms of helping the team, like the Major taking advantage of an ally’s distraction to cloak and then stealth kill an enemy, though that is certainly a valid tactic. What I’m talking about is First Assault Online’s niftiest feature: Skill Sync. 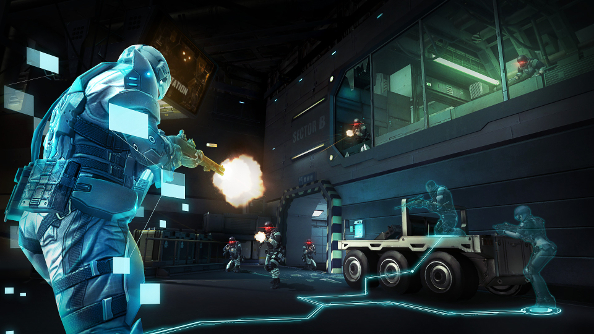 Upon activating an ability, that power becomes available for all nearby allies. So when I was using Batou, I was able to cloak myself because I was infiltrating an area with another player controlling the Major. This way, a single player can be cloaked and heal allies, or able to see through walls and sprint at inhuman speeds.

The result is a game that’s tactical and ripe for experimentation; or it would be if there was a way to actually communicate. Unfortunately, there isn’t. Voice chat doesn’t currently exist, which is an utterly bizarre omission in a game that’s trying to be more Counter-Strike than Call of Duty – and in fairness, even CoD has voice chat. That’s not to say that voice chat won’t be implemented in future, but right now, Neople are waiting to see what players want. I imagine they’ll want this.

Neople are definitely playing it safe, wanting to get feedback from players before they make too many decisions. Frankly I think they’re being too cautious, and pandering to a playerbase that doesn’t even currently exist is an unusual tactic. Thankfully, they aren’t being so cautious that they’ve stopped themselves from mixing things up occasionally. There’s the aforementioned Skill Sync, of course, but also tweaks made to traditional modes and a very handy pre-match recon feature that’s very much in the spirit of the anime.

Dive Mode: that’s what they call this interesting recon feature. Once matchmaking has done its thing, players are hurtled through cyberspace into a digital facsimile of the map. It’s not as detailed as the real thing, but it provides valuable intelligence before going in for real. As a new player, I found to be incredibly helpful, though I suspect that as people learn map layouts, its usefulness will wane. 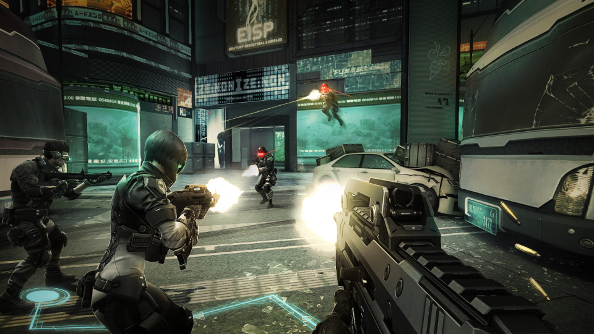 It’s things like Dive Mode that make it seem like Neople are doing a lot more than paying lip service to Ghost in the Shell. Even in its cybernetic skeleton state, where the synthetic flesh and muscles have yet to be applied, almost every aspect of the game has been reconsidered to make it feel authentic. This is where I can finally talk about Tachikomas. If you’ve watched the show, you’ll know them as adorably creepy walking/rolling tanks, and in First Assault Online, they’ll be both your allies and your enemies.

I first got to see the Tachikomas in action in First Assault’s capture and control mode. My team was tasked with fighting over these large nodes jutting out of the map – the capture points – which we needed to hack and protect. Once controlled, a Tachikoma was spawned, which made things mighty tricky for our foes. These AI warmachines are deadly, and not exactly easy to take out. They do have a weakness though: they can be hacked.

Normally, shooting at a Tachikoma is just a fast way to die. They can be damaged, but it’s a long process that you might not survive. Hacking them weakens them considerably however, but it makes you a target, as enemies get notified that you’re causing trouble. This is where teamwork comes into play again, obviously, with the rest of the squad protecting the hacker or whittling away the health of the Tachikoma.

When my team took down our first rollerskating tank, that’s when I started to become a lot less ambivalent. First Assault was starting to get its hooks into me. 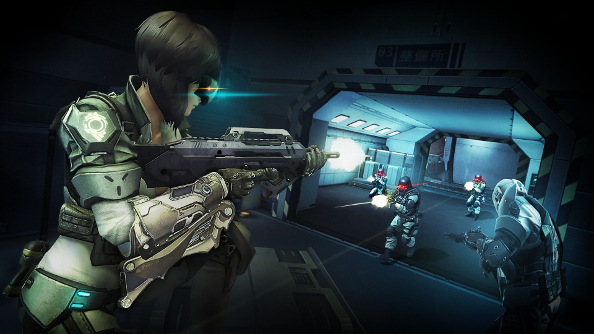 Impressively, the F2P model is an unobtrusive one. Indeed, when it launches today, and then for an indeterminate period of time, microtransactions won’t be available. And when they are eventually added, they’ll only be for cosmetic items or convenience. New characters, weapons and weapon augments like scopes and grips will be attainable through playing the game. You’ll be able to unlock new stuff by gaining intel by using your gear, or buying them in the shop with in-game currency that you’ll earn without dropping a dime.

Neople of also already added a sneaky little feature that will no doubt get people sticking around for just one more match. Win or lose, players will be able to make progress. Not just through intel, but also rewards for completing a match. These take the form bonuses and augmentations that you’ll choose at the end of a fight – you won’t know what you’ve selected until you click on it though. It might be an XP bonus, or an augmentation that you can apply to the character you just used, making them temporarily more effective.

First Assault Online has already made a solid case for Neople’s choice of genre, and I suspect anyone worrying that it’s CoD with an anime skin will be relieved and reassured. It’s still very early days, though. There’s a potentially fascinating team-based FPS in there, but like all multiplayer-only games, and Early Access ones in particular, its fate is in the hands of the players.